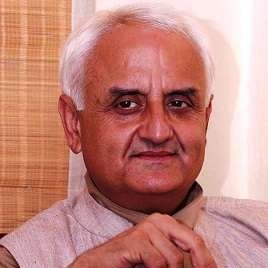 Kanak Mani Dixit, 55, is publisher of Himal Khabarpatrika and editor of Himal Southasian. He has been a journalist since finishing high school in Lalitpur in 1971. He did his college in Kathmandu, law in Delhi, and masters (international affairs and journalism) in New York. He taught law briefly at Tribhuvan University, and worked at the United Nations in New York between 1982 and 1990. Since then, he has pioneered the field of Southasian journalism while immersing himself in Nepali-language media. Over the course of the late 1990s and early 2000s, he became involved in civil rights amidst the Maoist insurgency and King Gyanendra’s autocracy, and was active in the People’s Movement of 2006. Since then, Dixit has been involved in a campaign to roll back violence and work to ensure the promulgation of a democratic constitution. He also works in disability, public transport, archiving, and architectural and environmental preservation. As a children’s author, his most popular work is the much-translated Adventures of a Nepali Frog, Dixit is also translator of Bishweshor Prasad Koirala’s Atmabrittanta: Late Life Recollections, and in Fall 2009 he came out with Dekheko Muluk (The Country Witnessed), a Nepali-language work that addresses the violence and political upheavals of the previous fifteen years. His recent book “Peace Politics in Nepal” was released on 19 April, 2011 at Patan. The book deals with compelling issues that have swirled around the five-year-old peace process which started in 2006.

He was awarded the first Prince Claus Award to Nepal for “his outstanding contributions to public debate, for creating platforms that enable South Asians to connect, interact and network transcending national and cultural boundaries, and for his socially engaged, multi-disciplinary approach to creativity and development”.