Things may finally change at the Buddhas birthplace. For the better.

Lumbini is Buddhism’s equivalent to Bethlehem or Mecca, but it has been more of a weeping wall for pilgrims and devotees. Decades of disinterest in distant Kathmandu have maintained this nativity site of Sakyamuni Siddhartha Gautam as a monument to neglect and prevarication. All that may be about to change. 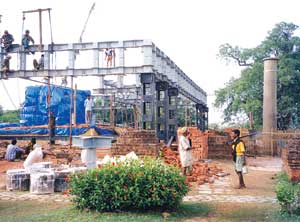 When the 60-year-old Mayadevi temple structure-the white box with the pipal tree-was pulled down in the early 1990s and the hallowed ground beneath it excavated, it seemed the final desecration. Since the dig was completed in 1996, the site has remained closed to the public, and the excavations covered by tarp and tin.

But suddenly, there are heartening developments. The Lumbini Garden is today a hive of construction activity, and the nativity site is set to open to visitors within a couple of months. A part of the new structure is ready for the ancient Mayadevi statue to be re-consecrated on 26 May, Buddha Jayanti. The completed structure will display the excavated ruins of the temple complex put up in the 3rd century BC, which includes the historical “marker stone” said to pinpoint the spot where Mayadevi gave birth to her illustrious son (an event the ancient statue commemorates).

There have been enough reasons in the past decades to give up on Lumbini. The main trouble lies with Kathmandu’s party-centric political establishment, uncaring bureaucracy, and demanding Buddhist groups fighting for control of the Lumbini Development Trust (LDT) and its dollar-and-yen potential. The terrain has become more complex as the sectarian interest in Lumbini extends beyond Kathmandu Valley Buddhists to include hill and high-mountain Buddhists of Nepal. Added to all this is the unhappiness of the Muslim locals who populate the Lumbini area, who feel left out in the rush to cash in on Lumbini’s tourism and pilgrim potential.

Between the largely Hindu administrators, Buddhist leadership and Muslim locals, Lumbini becomes a proper cauldron of woe. Then there is the donor factor. Although the LDT has sole say over the area, since 1997 the Sacred Garden has been declared a World Heritage Site, which brings it within the oversight of UNESCO. Meanwhile, the Trust has tended to lean on the Japanese Buddhist Federation (JBF), practically regarding it as exclusive patron.

In thrall of the small pickings from the JBF and heritage support provided by UNESCO, the Nepali commissars have quite forgotten the existence of an unique inter-governmental committee at the United Nations Headquarters in New York, solely dedicated to Lumbini. Started at the behest of the late Secretary General U Thant, who dropped famous tears on seeing the desolation of Lumbini in 1967, the International Committee for the Development of Lumbini was supposed to fund-raise and keep Lumbini in world focus.

Kathmandu’s unconcern has left the Committee moribund for more than a decade. The United Nations website today does not even list the Committee, and Nepal’s Permanent Mission to the UN is clearly un-interested in reviving the body.

So what has changed, that we can now look forward to the proximate completion of Mayadevi temple structure?

The sudden burst of activity can be attributed to the coming together of three factors: a can-do minister supporting a new, committed leadership at the LDT, which in turn took the help of the professional architects and engin-eers of the Institute of Engineering (IOE) at Pulchowk.

Minister for Culture and Tourism Bal Bahadur KC, ex-officio chairman of the Trust, has given the required backing to the present LDT chief, Vice-Chairman Omkar Prasad Gauchan. A Thakali and Nepali Congress stalwart, Gauchan is known to be above schisms between Buddhist groups. The IOE team, meanwhile, is led by Institute’s current dean, Jiba Raj Pokharel, a conservation architect with a PhD from York University. He is backed by IOE faculty, including Sudarshan Raj Tewari, Sudha Shrestha and Prem Nath Maskey, the last having the task of ensuring the integrity of the hidden steel superstructure that is at the core of the new building.

This was the site where Emperor Ashok put up the rock pillar marking the birthplace of the “Sage of the Sakyas” in the 3rd BC, and where Chinese travellers Fa Hien and Hieuen-Tsiang separately reported a complex of monuments in the 5th and 8th centuries. Archaeologists of British India located the Ashok pillar in the 1890s. The scholar autocrat Keshar Sumshere cleared the area and had by 1939 put up the whitewashed brick box around and atop of the ancient mound containing Mayadevi’s statue.

It is this aesthetically-challenged white box that has for sixty years been associated in the mind of people everywhere with the place of the Sakyamuni’s birth. The image included the large pipal tree which grew out of one side of the block. Over time, the structure-and-tree standing astride the Ashokan pillar took on an iconic power by association – until the excavation \’disappeared’ it. The LDT gave permission to the Japanese Buddhist Federation to \’tackle’ the tree which was spreading it roots into the brickwork, but in a process that has not been adequately explained, the entire structure was dismantled and another metre or more of soil dug up.

Lumbini got converted from nativity site to archaeological dig, and the foundations of a 15-chambered edifice were revealed, as well as the rock conglomerate \’marker stone’. The Japanese and Nepali archaeologists involved in the dig have cited various historical references to prove that this stone marks the exact place of Siddhartha Gautam’s birth.

The excavation was completed in 1996, but the next step-what to do with the site-became the subject of a tug-of-war between the various national and international players. Also to be contended with were the UNESCO guidelines on the conservation of heritage archaeological sites.

Some proposed a prayer hall, others a grand hollow stupa covering the entire site. Yet others wanted a building with \’Nepali’ elements, and there was a suggestion of recreating a Maurayan period shrine. In the end, an original plan put forward by the IOE was re-evaluated and approved.

The principle challenge was to find an appropriate design for the building itself so that the archaeological finds would be displayed while the Mayadevi statue was returned to its original sanctum. (The image had been removed for safekeeping when the dig began in 1992.)

The IOE team’s proceeded with its work on the basis of the following decisions:

. Keshar Sumshere’s box would be emulated despite its aesthetic shortcomings because the appearance of the earlier historical structure is unknown.
. the archaeological ruins as well as the \’marker stone’ would be exhibited by making the inside of the structure hollow.
. pilgrims and tourists would have access to the inside of the building.
. all the work done on the site would be reversible.

Following architectural principles for heritage spaces, the reversibility criterion means that the building can be completely dismantled. The use of steel girders, fabricated by the Radha Steel Structure of Sano Thimi, leaves the building without pillars, which allows a walkway from which visitors can view the excavations, the \’marker stone’, as well as the Mayadevi statue restored to its original sanctum.

A key challenge encountered by the design team was building a sturdy foundation to take the load of the heavy steel frame without impinging upon the archaeological integrity of the site. The architects discovered that an exploratory trench had once been dug by archaeologists right around the temple structure. This already-disturbed perimeter thus provided the space for the pylons and cross-beams to take the load of the steelwork. There was still the need to place deeper piles, however, and for this the architects chose to insert 30-foot beams of sal wood-chosen for being “organic”-into the alluvial soil. As hammering would have created unacceptable vib-rations, the piles were placed using augers turned by expert augur-wallahs brought in from Patna.

“Reversibility is important in this type of work, for some day someone may come with a better idea for the heritage site. That is why we have designed it so that this building can be completely pulled apart with no damage to the archaeology,” says Jib Raj Pokhrel.

One satisfied person in Lumbini today is Basanta Bidari, LDT’s Chief Archaeologist of the last 18 years, who has had the unenviable task of being custodian of an out-of-sight nativity site beneath a tin shed. Says Bidari, “This project is unique because it does several things at one go- it follows UNESCO guidelines, respects Nepali sentiments and memories, as well as follows architectural conventions for such sites. Besides, the Mayadevi statue will be back where it originally was.”

Faced with the 26 May deadline, the IOE team worked up a storm to finalise the design and structural aspects in just a month-and-a-half.

“Even if we are unable to complete the whole building, we will have Mayadevi back in her sanctum on Buddha Purnima,” says LDT chief Gauchan, overseeing the work in his suruwal-kameej and an umbrella to protect him from the blistering sun.

The cost of the project is Rs 70 million. The LDT will pay Rs 30 million and the government is supposed to come up with the rest. Gauchan says the money has been promised but not yet sanctioned. “For all the pride we take in Nepal being the birthplace of Buddha, the attitude towards this place has been slack,” says Gauchan.

You do not have to look far to see that Lumbini may yet be buffeted by the machinations various factions and groupings. Political changes in Kathmandu directly affects the executive leadership of the LDT. Since September 2000, there have been five chairmen of LDT (i.e. ministers of culture and tourism), and seven individuals have occupied Gauchan’s position of Vice Chairman since 1990. All of them might well have done a decent job had they been allowed to stay through the stipulated five-year term.

Being made a political football is what has made Lumbini look increasingly like what one journalist described as a “religious Disneyland”, rather than a spiritual site without religio-political overtones, a space that can be ‘owned’ by all the world.

Perhaps the work underway at the nativity site, at long last, is signal of the maturing of understanding as to what Lumbini represents. If this is true, one may even begin to hope for the implementation for the grand visions that form part of the Lumbini Master Plan prepared by the Japanese architect Kenzo Tange in 1975.
Omkar Prasad Gauchan, certainly, cannot wait to get started on that. “The idea is to keep working as long as one is allowed to,” he says.