The sun is setting as 13 bodies are cremated on the banks of the Reyu on Tuesday. They were among the 38 who died when the Maoists bombed a bus packed with 150 people in Nepal’s worst terrorist attack. 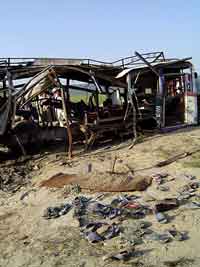 The Shaligram Travels bus descended into the dry riverbed next to a broken bridge at 7.55 AM. The wire-guided sulphur compound explosive was triggered from 200m away. It ripped through the cabin, lifted the vehicle into the air and deposited its shattered remains in an explosion of smoke, dust and sand. Most of the men who had left their seats to the children, women and elderly and climbed to the roof survived. Those inside didn\’t stand a chance.

Within minutes of the explosion a Red Cross unit from the Tharu village nearby was at the site. “There were writhing bodies and torn limbs everywhere,” recalled a student volunteer. The local health post ambulance, which could fit four people, immediately made off for Bharatpur Hospital and buffalo carts were pressed into service to ferry the wounded.

By the time the military rescue team arrived from the Royal Chitwan National Park, the locals had already dealt with the civilian wounded and only the dead lay about. Of the 12 army men who had been on board, three died, four were wounded and the surviving five had dragged their companions to a nearby knoll to await rescue. Their guns and magazines were collected by the villagers and handed over to the military.

Soldiers, as citizens, can travel by public transport when they are off-duty. But they often do so on patrol, in civilian clothing with their M-16s under wrap. They are presumably relying on a hope of some level of humanity amongst the rebels not to attack civilians. The soldiers in Madi couldn\’t have imagined the depravity of the rebel who would blow up a bus packed with civilians.

Krishna Chaudhary, an active social worker, kept the master list of the dead and the wounded: Tharus, Gurungs, Magars, Chepangs, Bahuns, Chhetris and one Shrestha-a Little Nepal of migrants who had settled in this fertile and scenic valley whose original inhabitants are the Tharu.

“Madi is a very close-knit community, it is isolated from the rest of the country by the national park and its regulations, we suffer flash floods and wild animals, we have learnt to look after each other,” says Chaudhary, “every villager in Madi feels the pain of what happened to the bus because we are a special kind of community within Nepal.”

The soldiers on the bus were moving between the military posts of Baghai and Bankatta. For more than a year, the villagers had been warned by the Maoists not to allow this. It was impossible for the villagers to make such demands of the RNA and the rebels obviously did not care how many civilians died in order to get at a few soldiers.

Maoist chieftain Pushpa Kamal Dahal apologised on Tuesday via email to the media. But it is not clear how much his writ runs any more among young men whose heads he has filled with the romance of violence. The Madi valley is the ideal guerrilla terrain surrounded by jungle on three sides and just a hill away from Bihar. To the north, the rebel supply line passes through the national park, across the East-West Highway, past Pithuwa, up to the Chepang Hills, into Dhading and Gorkha. Maoist commander Kshitij, said to be of a friendly sort, was replaced a month ago by someone obviously quite different. The transfer perhaps had to do with the rift in the rebel ranks between the Baburam Bhattarai and Pushpa Kamal Dahal camps.

The week previous to the bus attack, there had been abnormal night activity on the trails. Dogs were constantly barking into the darkness. On Monday night, the rebels had laid out the trap for the bus, packing sulphur compound, a chemical used in rock blasting, into a 10-litre bucket and buried it in the dry-river bed. Thick red and black wires snaked away under the sand and through the grass to the point at which someone was holding a switch in the morning watching two tractors and a bus negotiate the dry riverbed before the ill-fated one arrived.

It is now Tuesday. Two passengers are still missing. An eight-year-old boy\’s body is found in the sand, headless and unclaimed. Already decomposing, he is buried under a foot of earth which is then covered with a straw mat retrieved from the wreckage. A jeep hired by Ramanuj Bhandari carries the body of his mother Sumitra Bhandari, 52, to Gaidakot for cremation. She had come to her sister\’s for a wedding. On their way back from the same wedding, a family of Lamsals from Jhapa-father Dinesh, mother Ganga, and daughters, Dipa and Dipika-all perished.

The four sons of Ram Chandra Subedi, a 56-year-old local activist for the Nepali Congress, are already deep into funeral rites. Says the eldest son, Krishna Subedi, “What do they get by ambushing us like this? And why does the army take a public bus?”

Besides the tragedy that it is, the Madi mass murder is also a pointer to individual acts of cruelty across the land. Nepalis abhor violence and are not with the Maoists. To wipe the bloodstains from its hands and if it is truly revolutionary, the rebel leadership must make a clean break from violence and join peaceful politics. First, stop attacking civilians. Next, drop the gun.

As the sun sets on the cremation of Ram Chandra Subedi and 12 others by the banks of the Reyu, one elder turns to me and says, “The Maoists had some friends here, now, they have none. Some people used to give them shelter, now no one will.”