A new web portal run by the US military could herald an interventionist rather than home-grown regionalism.

In December 2011, a new Southasiannews portal became available on the web – Khabar South Asia. This could have been a welcome development, given the decades-long campaign to promote Subcontinental regionalism as a means for socio-economic advancement. What was intriguing was the ‘About Us’ button, however, which let on that the portal is brought to you by the Pacific Command (PACOM) of the United States military. 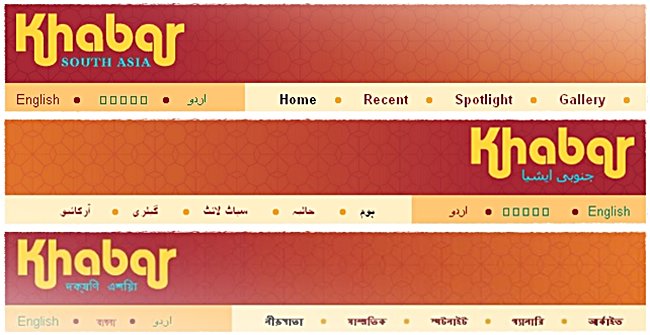 There may be reason to take some satisfaction from this new arrival among those who have been working over the years to develop cross-border journalism in the region. That the multi-billion dollar machine of the US military-intelligence complex has decided on the same pathway must amount to something. This is as far as the satisfaction goes, however. Regionalism in Southasia should be an instinctive endeavour of the people of the region, and not something to be promoted or manipulated by the geo-strategic agenda of a world power.
It is inappropriate for a military behemoth to run a news-and-analysis portal aimed at the Southasian public, for it can only be a masquerade. The state-sponsorship makes the endeavour suspect, an attempt to tilt public opinion in the direction favoured by US strategists rather than provide an independent source of news and opinion.
The stated objective of the Khabar South Asia is to provide information ‘on developments affecting the stability and security of the South Asia region’, presenting news and articles ‘from paid correspondents’ around the Subcontinent. The narrow geo-strategic focus becomes clearer in the portal’s mission statement of covering ‘developments that hinder both terrorist activity and support for violent extremism’.
Headquartered in Hawaii, the US Pacific Command is meant to ‘protect and defend’ the United States and its allies in the 36 countries in the east-to-south quadrant of Asia through deterrence and ‘the full spectrum of military contingencies’. PACOM’s goal is also to ‘support India’s evolution as a leading and stabilising force in South Asia.’ The khabarsouthasia.com portal is clearly part and parcel of PACOM’s mission to ‘encourage military-to-civilian relationships to counter common threats.’
While talking about Southasia as a whole, the Pentagon’s interest is centred on strengthening India vis-à-vis China, for which it also sees a need to sort out the conflicts and rigidities in the region, involving Bangladesh and Pakistan in particular. It may have been a slip-up, and there have been remonstrations from New Delhi, but PACOM chief Admiral Robert Willard told a Congressional hearing last month that US Special Forces were based in five Southasian countries (Bangladesh, India, the Maldives, Nepal and Sri Lanka).
Without doubt, Khabar South Asia is part of the United States’ strategic plans for a Southasian compact to counter China’s world-power trajectory. PACOM’s mission statement only confirms this intention, with India serving as the Southasian fulcrum. Besides developing New Delhi as a world ally, India also beckons as a market for US goods and services.
The geo-strategic collaboration between India and the United States is a matter of each country’s sovereign right, but it is not appropriate for PACOM to foist upon Southasia a media portal that can be used as a propaganda tool. Regional cooperation in Southasia must arise from the wellspring of public consciousness in each of our countries, and is not something to be promoted by outside military forces. This is why the provenance of Khabar South Asia is problematic – as an indication of American interest in promoting Southasian regionalism.
The main goal of Southasian regionalism is to reduce tensions between the countries so that the ‘peace dividend’ of trade and commerce leads to more people-to-people contact, economic growth and experience sharing in development. If there is to be a Southasian concord in relation to the growing power of China, that would have to be developed independently among the civil societies and state establishments of Southasia. If India and Pakistan are to progress towards lasting amity, that too is an initiative best left to the civil society of these two countries. It is a matter of great interest to the other countries of the Subcontinent, but best for the US trans-Pacific military machine to let the evolving discourse within Southasia proceed at its own pace.
PACOM’s interest does not seem to cover all of Southasia, veering very clearly towards the northern half. Besides English, Khabar South Asia is available in Bangla and Urdu (though one wonders why not in Hindi). The ‘khabar’ in the title relates to northern Southasia, not carrying a meaning in the languages of the south all the way to the Maldives. On the other hand, there is no sign of Afghanistan, which falls into the trough of CENTCOM (United States Central Command) rather than PACOM, and does not have a toe-hold in the portal.
In December, even as the Pentagon came forward with Khabar South Asia, the BBC World Service was pulling down the shutters on its own South Asia news portal as part of a decision to focus more exclusively on India. What we are seeing is a trend towards decreasing news interest in Southasia, even as there is increasing outsider interest in strategic affairs, both internal and external to the region. This may not be the best for the people and economies of Southasia, which should collaborate out of a sense of shared history and future promise rather than be led to cooperation.