Iron rods sticking out of the tops of buildings may not look too good, but they represent hopes for the future

There is more than one way to consider the concrete pillars that reach up to the sky from the tops of incomplete buildings all over the Subcontinent. One floor is built and the iron rods are left straining upwards, looking ahead to the day when another floor will be added. Perhaps that storey too will have more rods atop, indicating unfinished business, hope and perhaps avarice. 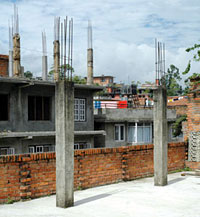 It seems that in large parts of our urbanising region a building is never complete. There is the expectation that the economy will improve, demand will kick in and a storey will be added. In this calculation, aesthetics is clearly not a priority.

Artistry and design is indeed a remote issue for the first generation of middle- to lower-middle class homeowners presented with the potentials of the ‘pillar system’. The attraction is the wide indoor spaces that were never possible earlier in the era of mud, brick, tile and timber. As specific architectural elements like flooring, roofing, dividers and sidings are discarded in the age of cement, an entire store of what may be called dwelling vocabulary is being abandoned.

In the hills of parts of Nepal modern construction materials have led to the demise of the pindi (veranda), that familiar space for chores and conversation under the pali (eave), contained by the tham (pillar holding up the pali). Indoors, the nidal (main wooden beam) and the dalin (cross beam) are disappearing as are terms such as chota (the first floor) and buingel (the second floor and attic). As homeowners opt for flat roofs, the dhuri is also history, that sloped roof of tile, straw or grass.

The Southasian classes who can afford concrete are yet to adapt to living in cement boxes. The transition from mud floor, wooden supports and load-bearing brick walls has been too quick and drastic and the indoor quality of life has taken a terrible beating. Walking down Kathmandu’s city core, one can see centuries of building design at one go-the mud-brick edifices with lattice-work windows from the era before glass panes, the buildings with lime-mortar pointing that hark back more than a century to when the technique arrived from Avadh and, finally, the buildings of cement-mortar that have been evolving since their appearance in the 1960s.

The living quarters of the older buildings were certainly cosier with their low ceilings, and room widths-of the houses of commoners and the palaces of kings alike-defined by the lengths of tree trunks available in the mountain forests. The interior spaces of these houses were refined over centuries and can truly be said to reflect the genius and sensibility of the highlander Gurung of the midhills, the urban Newar of the Kathmandu Valley or the forest-dwelling Tharu of the tarai plains.

But it would be mere romanticising the past if one were to see nothing of significance in the modern-day constructions despite their aesthetic deficit. The homeowner will willingly get rid of the dhuri and buingel if s/he can have a cement flattop that needs no maintenance and opens up the roof space for various household activities. The heat and cold that the cement roof absorbs during the different seasons, creating discomfort indoors, is a reasonable trade-off. Downstairs, concrete beams and pillars allow for vast spaces never dreamed of and windows now let in unprecedented amounts of light.

Most significantly, the ground floor need no longer be the dank and damp space suitable only for keeping livestock and storing manure. Suddenly this level is available for commercial space, airy, inviting and open to the street. Of course, being partial to this evolution of the ground floor does not mean that one has to like the clanking, rattling, rolling metal shutters that are by now a ubiquitous Southasia-wide feature.

Over time, as we all begin to understand these modern building materials better, an indigenous architectural form is bound to evolve. This evolution will not take place by way of top-down introduction from those who build for the well to do, but will be pushed by idioms that emerge from the gallis, toles and bahals. We will come to terms with the unexpected indoor space we have suddenly been presented with and learn to fill it with the warmth and charm of our traditional homesteads.

The ungainly rods poking off the top of concrete rooftops therefore may indicate not greed, but hope for a better tomorrow. Hope to add a floor some day. For the moment aesthetics be damned.