Amidst Kashmirs tragedy, we must prepare for the next big quake in the Himalaya-Hindukush

Why has the Kashmir Earthquake of 8 October been termed the ‘Southasia Quake’ by the international media, including the all-powerful, real-time satellite television networks? Southasia is a vast region and the ground 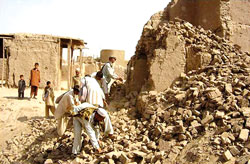 trembled beneath one corner of it, well known to the world as Kashmir, on two sides of the ‘line of control’. Somehow, it does injustice to the suffering of the living and memory of the dead to call the disaster by the name of the larger region when a local name is available.

Meanwhile, the UN has declared the Kashmir catastrophe more devastating than last year’s tsunami. Three to four million people are suddenly without homes on the edge of winter. The result of an underground quake, the tsunami of 12/26/04 struck the southern beaches of Southasia, while the earthquake of 8/10/05 hit the northwestern mountain fastness. Because it was such an unusual event and also because many holidaying westerners died tragically, the coverage of the tsunami attracted emergency support on a massive scale. Not so with the Kashmir quake of 8/10. To date the world is not even close to matching the $11 billion gathered for post-tsunami relief.

In the face of an earthquake that knows neither borders nor LoCs, of course we must utilise the opportunity of the disaster to ease Kashmir tensions between India and Pakistan. But geopolitical certitude in the two capitals will surely require something more than a shifting of geological plates to undo. What we need is for national establishments in both countries to learn to take the Kashmiris themselves into confidence, as well as find a way to fuzz the frontiers and sanction dual identities. For that, we need a shake-up of the mind, not the ground.

The immediate challenge in Muzaffarabad, in Uri, in Hazara, in Tangdhar, is to help those without shelter and means of livelihood to make it through the winter of 2005-06. But thereafter, we are looking at many years of rehabilitation. Given the sharp drop that we can expect in humanitarian concerns as soon as the television cameras stop broadcasting live, the intelligentsia of Pakistan, India and Southasia as a whole have a responsibility not to turn their backs on this quake and its living victims. They have to stay with the Kashmiris for the long haul and keep the governments on their toes.

This year, nature chose Kashmir to sound a warning to the rest of Southasia-most importantly, to those who live along the Himalayan-Hindukush rimland. The geologists are not sitting easy and neither should the rest of us. The prospect looms of a horrendous earth shaking in what is known as the Central Himalayan Gap, which covers all of Nepal and more. There has not necessarily been enough release of ‘cumulative elastic energy’ in the rubbing of plates beneath Nepal and the nearby regions to the north, west and south. A huge swath of territory is therefore dramatically overdue for a devastating quake. The suffering of Kashmiris must at least inform those who are in a position to save lives when the earthquake hits the Central Himalaya.

The newly adopted building material all over the Himalaya-Hindukush is concrete. Heavy-set buildings were the death traps of Kashmir as testified by numerous pictures of the tragedy. Kathmandu, the largest urban concentration in the Himalaya, will become a ‘valley of death’ when the Big One comes, for its buildings are now nearly all of concrete using ‘pillar system’ construction. And what of rescue? In Kathmandu and elsewhere, there will not be the military helicopters and ground transport available in militarised Kashmir.

To die under rubble while awaiting a rescue that never comes is a gruesome way to go, as happened to many on and after 8/10. Kashmir will have to be helped back on its feet, while we look ahead to the next Big One-and prepare