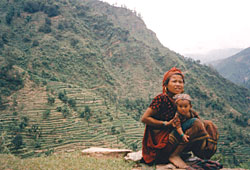 At every turn we meet people denied the choice of being neutral.

Talking in Rolpa is a journey through a map of death-Nuwagaon, Holleri, Lisne, Gam. The last action in these parts was in Gam on 7 May, and the villagers from Pobang, a day’s walk from the Sulichaur roadhead, watched the firefight rage through the night, tracers and bombs lighting up the ridge across the valley.

But though it is easy to forget, these are also places with a longer history. Up-valley, Thawang is the village where, deep in the Panchayat years, the locals defied faraway Kathmandu. The most immediate reason that sparked the Maoist movement, so the story goes, was in Gam, where in 1995 a rivalry between the Samyukta Jana Morcha on the one side and the Nepali Congress and the Rastriya Prajantra Party on the other came to a head when the two groups fought during a fair. The resulting harassment of SJM activists by the political bosses of the day soon snowballed into \’revolution’.

We are here to see for ourselves what living in eastern Rolpa is like these days, and so we are bypassing the district headquarters of Libang, where civil servants and refugees from the villages fearfully await the day the battle-hardened youngsters of the so-called Janamukti Sena (People’s Liberation Army) choose to attack. The Maoist fighters are \’jangal ko bagaal’ here-those who have entered the forest-and their writ runs over this harsh geography. “The peasantry here in Rolpa are all in a chep, between the Maoists, who have the run of the land, and the security forces, who swoop down without notice,” a teacher from Palpa told us. One of the few people who spoke freely with us, he talked at length about how what was once one of the most peaceful corners of the country is now a series of killing terraces.

Everyone in Pobang is Magar, barring eight houses of Dalits. It takes time, but eventually some villagers sit with us and talk about their problems, about the difficulties that people in Rolpa and Rukum are facing due to the restrictions on the transport of foodstuff, about how the houses of suspected Maoist supporters are razed by soldiers who come out in occasional details. Not one of these people dares criticise the Maoists. They point to the destruction of the Lutheran World Service development outpost near the village that used to serve the whole area, but will not say who did it.

Finally, one middle-aged man tells us in a whisper: “There are no devis and deutas here any more. Puja-aja is a thing of the past. And there is no cultural life other than the Maobadis’ mass meetings. They say that in today’s scientific era there is no space for superstition.” On the ridge over the village there is a temple without a roof. The idols of Shiva and Parbati are gone, as is the bell that used to hang outside. The fair that would take place here every Shukla Paksha, the first quarter moon of the month of Bhadra, has not taken place for a few years. Likewise, there is no Baraha Puja in Mangsir, no Siddha Puja during Buddha Purnima in Jeth, no puja to Mahadev during the full moon of Asar.

Political activity, too, has gone the way of religion. Any political activist of consequence from the ward to the village level is away in Libang or in the townships along the roadheads, waiting for the day the Maobadi are vanquished, or busy creating alternative lives for themselves, knowing that such a day may not be near in these mid-western hills.

Even without the Maobadi, life is tough here, especially in comparison with the obvious wealth of the Madi valley of southern Rolpa. Worse even than poverty is the lack of basic services. The school-houses are dark, with mud floors; the health assistant stands in for the \’doctor’. School teachers, who have always been the vanguard of the political parties, are subdued under the Maoist threat, and do not dare express an opinion. These docile men, mostly Bahuns from the middle hills, and the odd health assistant are the only representatives of the state.

For as long as people here can remember, the Magar men from these hills went to India to earn a living. Today those who go are fleeing Maoist conscription.

Warles Rokaya came back to start a shop after a three-year stint as an electrician in Malaysia. Because of the economic blockade at Sulichaur his shelves are today empty of provisions and the instant noodle packets that are increasingly the staple of the Nepali hills. Referring to the three three-month instalments of the state of emergency, he says, “The first emergency was difficult, the second was worse, and now in the third emergency, our suffering is complete.” There isn’t food to buy, even if you have the money. But worst of all the hardships, perhaps, is the inability to express yourself. At every turn, the people of Pobang-and all the people we meet on our trek-are denied the choice of being neutral, and so they remain silent.

But if Pobang is depressing, it is even more sobering to arrive in Jelbang, in the next valley over to the west. It is a village surrounded on three sides by the tall hills just south of the Jaljala mountain that provide the mythical backdrop to the Maoist \’revolution’. Fifty-one people from Jelbang are said to have died in the fighting so far.

The entrance to Jelbang is festooned with once-red Maoist banners (“To revolt is the people’s right”), now bleached with age. In Jelbang, like in Pobang, those who do speak to us refer to the difficulties of the emergency and the hopeful days of autumn 2001, the four months of ceasefire when the villagers hung on every word that came of the negotiations. “Those were days of calm, even the Maobadi leaders told us that peace would come with the barta. But talks evaporated, and the situation became even more terrifying, and it has become worse over the course of the three emergencies,” says one elder, referring to the renewals.

On the way down valley, a life-size dummy hangs from a tree, representing the “Deuba sarkar”. Beneath the swinging figure, complete with tattered Chinese canvas shoes, women scurry down towards Sulichaur, not looking up at the strangers who have walked to their village to try and understand what
the Maoist war has done to their
tattered lives.