Looking back at a children’s travel-adventure tale, featuring a Kathmandu frog, is one way to see how Nepal has changed as a country and society, and how it hasn’t. The young frog Bhaktaprasad Bhyaguto started out from his home terrace in one corner of the Kathmandu Valley in 1992, a journey that evolved over successive nights by the bedsides of my children, then seven and four years old. That story went on to become serialised weekly in the Rising Nepal daily, and in 1996 it was expanded as The Adventures of a Nepali Frog, published by Rato Bangala Kitab. 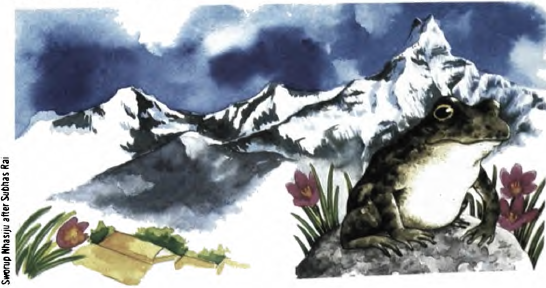 The frog’s adventure had its origin in my own treks. Like the frog, I like(d) to trek alone, and even have a hypothesis that trekking in the hills with a backpack is one of the most mentally stimulating and creative of activities – perhaps because long-distance walking by oneself is an important part of human evolution. The idea of Himal magazine was born during a trek, in the Austrian Alps. The creativity part has to do with the fact that the trekker tends to be alone and undisturbed, while the blood pumping into the brain from the exercise keeps the ideas flowing, seemingly.

Bhaktaprasad was certainly very creative during his travels. He first investigated the Ason market of Kathmandu, then chose a tin can for a boat and negotiated the cataracts of the Bagmati River down to the Tarai plains. He befriended cart-pulling oxen and made it to Chitwan National Park, where he participated in a terrific monsoon party with the wildlife there. He was given a ride to Pokhara by the first (and, at that time, only) woman truck driver of Nepal, Phulmaya, and befriended some degenerate frogs by the Phewa lakeside. He then trekked onward, seeing for himself how the Fish-Tail Mountain changes shape, and traversed the Himalaya. He ended up at Border Pillar No 22 on the Changtang Plateau, understood some of the intricacies of the Bon religion, and finally flew back to Kathmandu seated in the shirt-pocket of an airline pilot.

The places visited by Bhaktay, as he is fondly known to his friends, remain the same. However, much change has overtaken the society and polity in Nepal in the last 15 years. Bhaktaprasad began his travels in the same year, 1996, that the Maoists began their ‘people’s war’, and the people were caught in a pincer between the rebels and the reactive state. Everywhere, the villagers began to be wary of strangers in their midst, and the innocent eye-to-eye contact, and the open greetings to the visitors – all of this disappeared. Bhaktaprasad would not have made friends with the same ease as he did in the early 1990s, particularly when the fighting escalated towards the end of the decade.

While the peace process has not been completed, the country is no longer at war, and the verve of old is returning to the villages of Nepal. The escape of young people from the hills continues, though, triggered during the years of the conflict (but not only because of the conflict). With peace and a bit of political stability and rule of law, rural Nepal is sure to re-energise itself back to the state in which Bhaktaprasad the frog found it in the mid-1990s.

Round the rimland
From a constitutional monarchy, Nepal became an autocratic monarchy between 2002 and 2006, and in 2007 was declared a republic. It became important to lightly update the story. And so, the Royal Chitwan National Park became the Chitwan National Park, and out of his bus window in Kathmandu, Bhaktay sees not the Narayanhiti Royal Palace but what is now the Narayanhiti Palace Museum. When the talkative hybrid-yak dzo, Dzopa, explains arcane matters of governance like the king addressing a session of Parliament, this now had to be updated to the president of the new republic doing so. Where the frog is mulling over whether he is ‘the first frog traveller in the kingdom’, now it is ‘country’.

The landscape has not changed, with the mountain massifs, valleys and plains more or less the same. But today roads can be found all over Nepal, in places where 15 years ago the only way to reach would be to trek on foot. Some regard this as a bane – no one likes to trek when you know that there is a motor road below you that will take you to the same destination. On the whole, however, the locals like the idea of a road, and trucks, jeeps, buses and motorcycles that it brings. On Bhaktaprasad’s trail, the roadway now extends in fits and starts all the way from Pokhara to Jomsom to Lo Manthang, right up to Border Pillar No 22.

In Lo Manthang, Bhaktay encountered the lady innkeeper who was known as the Hema Malini of Upper Mustang – now it would perhaps be a Kareena Kapoor. But while I have not changed the name of the actor, I have introduced the term ‘Bollywood’ in the text, a usage that was not quite in vogue back in 1996. In 1980, when I first visited Lo Manthang, Nepali was little spoken in the area. When I went back there with my family in 1992, it was spoken everywhere. While this of course made the Loba people more competitive with the rest of their countrymen and -women, this evolution – partly driven by the nation-state and partly by the market – is part of what has threatened local cultures all over the country. The heightened sense of cultural loss, and the need for protection, is something that has come to the fore in the last 15 years, and the tumult of voices in today’s Constituent Assembly and outside signifies a nation-state where at long-last inclusive nation-building is in progress.

Identity assertion by Nepal’s marginalised communities was already a reality in 1996. But it did not require the identity movement for me to locate several of Nepal’s communities loosely within the anthropomorphic characters that Bhaktay met. However, in the revision, I did feel the importance of adding a Muslim name among the surfeit of cross-cutting hill-plain-mountain identities. And so it is that Altaf has now arrived to give company to Tulsiram the ox-cart driving bayel!

When the frog reaches the Muktinath shrine north of the Annapurna range, I have now provided the Himalayan Buddhist name for it as well – Chumig Gyatsa. Tibetan Buddhism is the name used to loosely describe the various strands of Buddhism in the high valleys, but in the evolving sphere of nation-state identity-building, it may not always satisfy all ‘tsampa-eaters’ of the Himalayan rimland. And so, on occasion, I have referred to ‘Himalayan Buddhism’.

Speaking of personalities, one of the first friends made by Bhaktaprasad as he starts his journey is Prachanda Plover. As noted, this book was first published in 1996, when the Maoist war began, but I must confess to the reader that at that time I had not heard of Pushpa Kamal Dahal, much less been acquainted with his nom de guerre, ‘Prachanda’. Prajapati Prasai is a reference to a friend and mentor, the well-loved tourism entrepreneur ‘PP’, who got me involved in the Himalayan Rescue Association and who tragically died in a plane crash in 1999.

Balancing wanderlust
Nepali society has changed a lot in the intervening years, and so has the writer. My own personal journey of discovery has been perhaps affected by a 2000 trekking accident when, while travelling alone in the ‘Annapurna circuit’, I fell down a cliff and spent three nights and four days paralysed on a ledge above the Marsyangdi River, in north-central Nepal.

This personal story of course does not find mention in Adventures, but I did begin to feel thereafter, for whatever reason, that empathy is a more powerful human emotion than compassion. One treats fellow creatures as equals, while the other reaches down philanthropically to help those ‘less fortunate’. The travelling frog finds a balance between his wanderlust and the importance of inner peace in the advice of Lamolama, the novice monk of Shey Gomba monastery in Upper Dolpo. The revised text has Lamolama emphasising not just compassion but also empathy.

Environmentally speaking, I have had to add reference to the sewage that now flows in a much higher concentration in the river Bagmati and its tributary Bishnumati than when Bhaktaprasad first waded in 15 years ago. I have also come to realise that the Bagmati does not exit the Kathmandu Valley at the Chobar Gorge but somewhat further south, and have corrected that lapse. Another earlier error now corrected was the mention that the main temple at Muktinath was dedicated to Lord Shiva (for Hindus), when it is actually Lord Vishnu.

The one full paragraph I have added to the story is a reference to the mega-sized environmental changes the globe is seeing. Climate change was not a matter of central focus when Bhaktaprasad started out on his travels, but today the Nepali public at large is aware of the receding glaciers, the dangers of glacial outburst floods and other potential disasters.

When Bhaktaprasad returns home a hero, at the airport he is surrounded by reporters. Earlier, he spoke eloquently of Nepal’s physical and demographic diversity. Now he adds concern for the environment due to forces that are national and international, and he points out that frogs, as ultra-sensitive evolved creatures, are like a barometer for the health of humanity and the world environment.

If the frogs of the world begin to disappear, then let all humanity beware. So says Bhaktaprasad the Frog, 15 years later and counting…