Sabine Lehmann of Studio Seven at the Hotel Vajra remains a disciple of the German playwright Bertolt Brecht, who challenged Hitler and was persecuted by Joseph McCarthy.

Brecht’s enigmatic dramatic style that was dubbed ‘epic form’, including non-linear script, techniques such as exaggerated acting and sudden turn to song-and-dance, was used to draw attention away from the acting and towards pressing social issues of the day. Brecht sought to use theatre to purpose as much as to entertain.

Lehman has used her guru’s philosophy and technique to create an iridescent stage in Kathmandu at the Naga Theatre of Hotel Vajra. Once a year, she teams up with set designer maestro Ludmila Hungerburger to bring forth production of the wildest imagination imbued with the Brechtian spirit.

Studio Seven’s productions are a yogic exercise, untroubled by the need for public relations or publicity, knowing that just ‘being there’ ultimately makes an impact. There is no knowing how much, but over the years Lehman and Studio Seven have surely influenced the evolution of film and theatre in Kathmandu, as young actors (not necessarily proficient in English) are groomed and sent forth, others to take their place. 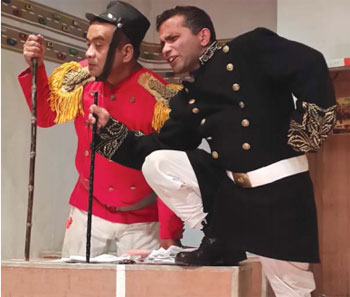 Sabine has utilised the Brechtian model in many adaptations over the years including the life story of Milarepa and episodes of the Mahabharat. In this year’s production, however, she has picked up Bertolt Brecht’s own Threepenny Opera. Staying pretty close to the original, The Three Paise Opera departs only to convert the yawning class divide in the original to reflect Nepal’s encounter with job migration and manpower agencies. Otherwise, the songs and script remain more or less true to the original, aside from the occasional jab at long-delayed constitution making.

Unlike in some productions in the past, when there have been strong and weak actors, the cast in The Three Paise Opera comes off proficient and confident – one would even say unabashed, as one would expect in a Brechtian production. For the untrained Nepali ear like this writer’s, some of the impromptu song renditions may not be fully intelligible the first time around. This may require a second visit to the Naga Theatre, which would be time well spent to catch the little gems that are strewn throughout The Three Paise Opera.