A seminar yields clues on Indian thinking on security issues as they relate to insurgent-ridden Nepal.

When Indians and Nepalis meet to talk bilateral relations, the discussants invariably take refuge behind th 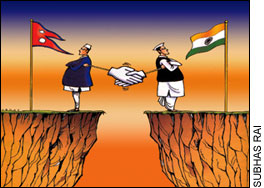 eir respective national flags and there is little introspection or self-criticism. Among Indian participants at workshops and seminars, there is ignorance and indifference that gets projected as arrogance. Among Nepalis, there is academic vulnerability and political conditioning that descends all too quickly to conspiracy-seeking, with ‘India’ seen as one monolithic entity controlled by an ill-intentioned South Block.

There have been ‘track two’ attempts in the past to jump-start real discussion, particularly because Nepal has evolved since 1990 as a deliciously complex polity. But multiple body blows have battered Nepal’s image among the Indian middle class, which these meetings have been unable to put in perspective. These extend from the perennial allegations of Nepal as a platform for Pakistani intelligence (remember the ‘Nepal Gameplan’) to episodes such as the IC-814 hijacking and the Hritik Roshan riots. Meanwhile, the deadlock over the Mahakali Treaty, and misuse of the open border for less-than-savoury ‘trade’ have exasperated Indian officialdom no end.

To raise the level of discussion on Indo-Nepal relations, a meeting was organised in New Delhi 13-14 February by the Observer Research Foundation. The ORF is a massive endowment created by the Ambani clan (Reliance Group), which has started an Institute for Asian Studies run by Maharaj Kumar Rasgotra. Within the Institute is a Centre for Nepal Studies, led by another (more recently retired) diplomat KV Rajan. The fact that both Rasgotra and Rajan are former ambassadors to Kathmandu means that Nepal is high in the ORF radarscope.

The Indian ‘side’ was made up of a couple of academics (SD Muni and Mahendra Lama) and a large number of former diplomats, bureaucrats, generals and one admiral. The Nepali phalanx, on the other hand, constituted of several politicians, and two each of scholars, journalists, businessmen, and one consultant. Security concerns of India in the context of the Maobaadi uprising, the evolving power equation in Kathmandu, and the knotted problem of water resource sharing took up much of the deliberations, while other issues including that of trade (the revised 1996 treaty, the inexplicable quarantine on Nepali produce, and so on) were just touched upon.

The retired officials of India, whose seniority made them sermonic, tended to be wedded to their country positions. As happens, the Nepali participants were mostly in listening mode and unwilling to make proactive point-of-view presentations. With the exception of former minister (finance, foreign) Ram Sharan Mahat, who was able to field comments with relative ease on a range of subjects from diplomacy to trade to security. Ambassador Bhekh Bahadur Thapa felt constrained to respond, with his oratorial flair, to sharp challenges from the participants directed at the Kathmandu dispensation. Sociologist Sudhindra Sharma’s measured response on tarai demography was not enough to dislodge the mindset about ISI penetration of India through the medium of the Nepali musalman.

Even if the two ‘sides’ may have talked past each other, however, there was enough information to be culled from the presentations made in the ORF seminar, particularly with regard to perceived security concerns of India vis-?-vis the insurgency and the evolving political equation in the kingdom.What follows is a summarising of the presentations.

The foreign secretary
In an extempore opening statement which he said he was making in his personal capacity, Indian Foreign Secretary Kanwal Sibal spoke of the need for Nepal to be “steered and guided” by its well-wishers so that it could handle the “Maoist menace”. There was international worry that if Nepal emerged as a failed state it could be used as a platform for international terrorism. On the other hand, international interest and involvement in Nepal would have a bearing on Nepal-India relations. While India understood the need to strengthen the Nepali army, and was itself active in that regard, it was concerned the flow of arms to Nepal which would raise “the lethality of the conflict”. While India did not want to be more closely associated with Nepal than what the latter desired, Sibal wondered whether Kathmandu was showing the required degree of transparency on matters of interest to New Delhi.

India hoped to see much greater collaboration between the monarchy and the political parties “so as not to waste precious time in tackling the real danger” in the form of the insurgency. “Political parties should not be marginalised,” Sibal added, and even though in the short term moves “could be made here and there”, the advisability of keeping the political parties out of the picture was a question that could be legitimately posed. Meanwhile, once the governmant’s dialogue began with the Maoists, this would put New Delhi in a quandary over how to deal with the insurgents given their links with Maoist groups in India.

Diplomatically couching his presentation in the form of questions, Sibal asked, could Nepal’s current problems be resolved without India’s active involvement, was Nepal ready for such involvement, and would such greater involvement give propaganda ammunition to anti-India forces within Nepal? Further, was there a tendency to blame India for events as they had unfolded? Was there support in Nepal for enhanced international relations so as to reduce India’s weight and role in its affairs, and would this in fact lead to increased contradictions within Nepali society?

Sibal then wondered how China would be look at the increased Western involvement in arms assistance to Nepal, and whether this would not lead to a new strategic equation. Overall, how much of the present situation in the country was the result of less than optimal policies that Nepal had followed vis-?-vis India in the past, Sibal asked, without elaborating. At the highest levels of the Nepali government, he hoped, there would be a desire to maintain a transparent relationship marked by consultations on key issues.

The Indian Gorkha
Ashok K Mehta, a former officer of the Indian Gorkhas, tackled head-on a subject that Kathmandu opinion-makers prefer to leave alone, the service of Nepali men in the Indian army. He said “the lust for soldiering” was still present among highlander Nepalis, and the Gorkhas had “unquestioned loyalty to India”. As someone who had walked extensively through the western hills of Nepal, the retired major general defended the ex-servicemen from the charge of having helped the Maoists. There had been no case of subversion by serving soldiers, and a total of only seven ex-servicemen were known to be on the Maoists’ “payroll”. The ex-servicemen had been told by the Indian Chief of Army Staff last year that they were liable to be branded ‘terrorists’ and have their pensions cut if they aided the insurgents.

An example of the Gorkha soldier’s role in binding Nepal-India relations could be seen in the “blood ties” between senior officers in the Nepali army and those serving in the Indian Army, said Mehta. There was one Gorkha officer currently commanding a brigade in Jammu and Kashmir, whose six generations had by now served in the Indian Army. Besides the many welfare schemes promoted by the Indian army in the Nepali hills, Mehta said pay from the 35,000 servince soldiers in the 38 Gorkha battalions and pension of about 150,000 Indian Army and Assam Rifles ex-servicemen added about Rs 160 billion to the Nepali economy every year. Some “misplaced minds” in India had been calling for curtailment of Gorkha recruitment from Nepal, but Mehta felt that, if anything, the numbers should be increased.

Using an analogy that resonates in the present World Cup context, Mehta said the Gorkha ex-servicemen “bat for India while fielding for Nepal”. He added fluently, “They are unarguably pro-India, and help in moderating the anti-India factor in Nepal.”

The COAS
Ved Prakash Malik, India’s former Chief of Army Staff, started by reminding participants that the soldiers of the Royal Nepali Army were treated at-par with their Indian colleagues, which was a unique privilege not extended by his army to any other force. Also, the RNA got extremely subsidised rates for the ordinance it bought, at rates available not even to the Indian Army. The fact that the chief of each army was recognised as honorary chief of the other was no laughing matter either.

With such a close relationship, it was difficult to understand why Indian security concerns were not being understood by the “other side”. Neither did he understand why the RNA, in one instance, had felt it necessary to give a farewell dinner to the departing Pakistani ambassador in Kathmandu. The Indian Army was following closely the evolving Sino-Nepal military cooperation, he said, in spheres ranging from ordinance production to UN peacekeeping training (when China was not a peacekeeping nation), the manufacture of boots and plans for a medical college. Meanwhile, while it was getting guns from other sources, the RNA had rebuffed an Indian offer of supply of a brand new make of 5.56 rifles.

The threat perception concerning the northern frontier of India had diminished, said the retired general, and the Chinese attacking India via Nepal was no longer a valid concern. The threats being seen from the direction of Nepal were now “non-traditional”, such as money-laundering, smuggling and terrorism. There was particular concern over Islamic fundamentalism making inroads through Nepal.

In the context of the insurgency in Nepal, a defence planning and cooperation group had been formed between the two countries, intelligence sharing had been upgraded and fast action was being taken when requests came from the Nepali side. “I think it is rubbish to say that India is not active in helping Nepal tackle the Maoist problem,” said Malik. However, he confessed he was a little confused as far as politics in Nepal was concerned: “If all the political parties have contact with the Maoists and still you are asking the army to go and deal with them, there is a problem and please sort this out!”

On the Mahakali Treaty, which cannot but be a centerpiece of Nepal-India discussions, the Indian participants at the New Delhi seminar expressed perplexity over the lack of national consensus even when parliament in Kathmandu had approved the treaty. Ramaswamy Iyer, former water bureaucrat, said that “if the original treaty was a cheat, then there should be no agreement.” But rather than repeat the failures of the Kosi and Gandak agreements, the Mahakali treaty should be made to work, he said. BG Verghese, who has written widely on Himalyan waters, cautioned the Nepali participants that “favourable options for Nepali power may be pre-empted” with projects coming online in the Indian Himalaya. Nepal may be prevaricating against its own interests. Salman Haider, foreign secretary when the document was signed (the organiser of the seminar, KV Rajan, was the ambassador in Kathmandu at the time), said, “The original virtues of the treaty are sadly being overlooked. We should try to reconcile the differences. The waters have been muddied. The objections to the treaty in Nepal should be put to scrutiny.” Which might not be such a bad idea, because the participants who spoke at length on the Mahakali tended to focus on hydropower exports, and seemed to gloss over the downstream benefits from (and value of) stored water in the hills of Nepal with regard to irrigation, flood control, drinking water and industrial uses in the plains.