Gokarna Das took a long breath – in fact, it was more like a deep sigh if not a heartfelt gasp – as he gazed across the expanse of water at the funeral pyre. As a long-time aspirant seeking to infiltrate the charmed circle of Southasian writers in English, he had finally discovered that the only way to achieve success was to start the story at a cremation ghat. No two ways about it, he thought pensively, as the heat from the flame danced against his knotted face and brown, muscular torso. 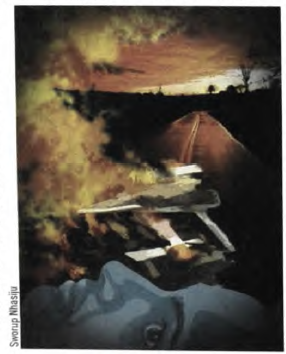 Gokarna Das did not have any top on because it was important to expose his brown, muscular torso, with a darkened brass talisman with his brown, muscular finger that hung on a black braided thread down his substantial chest – don’t make the mistake of writing ‘breast’. With morose eyes, he surveyed the scene. One pyre, two pyres, three pyres, all of them funerary or funereal, he could not decide which.

But definitely a lot of pyres,’ he observed, speaking to nobody in particular. He toyed with the talisman with his brown, muscular fingers while his mind went back over the events of the last few days. Why had Srinivas said what he did, that too with such vehemence, even as he had struck the side of the bullock cart with such ferocity? It is important to repeat key phrases to indicate command and confidence with the English language. ‘Why can’t a writer from Darbhanga make the Booker?’ asked Gokarna Das, once again of no one in particular, but he knew that there would be those who would ultimately hear this voice from the dead centre of truncated Bihar (without Jharkhand, that is).

Back at the funeral pyre, Gokarna Das worked hard to ensure that any notion of linearity was airbrushed out of the narrative, for that is how they like it. The judges want you to produce a compelling case of obfuscation, and the upmarket reader seeks reassurance that even if she did not understand what was going on, something had happened.

And so, back at the funeral pyre, was it Srinivas and his bullock, Musharraf and his coup, or Parvati and her reported, and presumed, infidelity, that had led to the death by the highway? A lonely death if ever there was one, by the looks of it. He must have walked the dark shoulder of the road, leaving behind the dhaba with its naked bulb, which should have been a hurricane lantern for atmosphere. The constant humming would have been the cumulative grunts of a thousand dung beetles, but since that detracts from the atmosphere sought to be created, let us say that the forest was humming with the thrumming of a thousand cicadas.

The past perfect is a good tense to use, to speculate, evoke and say nothing all at the same time. And so he, our protagonist, would have emerged from the dhaba after a hearty meal of daal-bhat – that is, steamed rice and lentil soup. His face might even have puckered up as he tried the mango chutney that Parvati claimed she had herself marinated, using condiments available from the organic produce of this land in the back of beyond of backwater Bihar. Be sure to introduce an unexpected turn of narrative at about this point …

This was where, very long ago, great stands of sal would have stood. The forest are all gone, but so long ago that it does not really matter because there is not even the historical memory left. When the great sage Valmiki walked this eroded earth so red with, well, rust-coloured soil, would he have known of the stories that would be played out again and again in this former forest, where the river makes a bend, and the majhi fisherman’s sweep of the net has the kingfisher suddenly take flight in a rainbow of tropical colours?

Do we know where we are in the plot? Does it matter, thought Gokarna Das, when life is meant to be one long plod into the sunset, or sunrise? Why are we so exercised about what Parvati may have fed the poor bloke, when everyone remembers no one talking when Pervez launched his coup? And did not Gabbar Singh, the daku (dacoit, bandit, thief), run off with all that Pervez had looted? Did anyone complain at that point? Was not the village always the same, this unseeing, uncomprehending mass of – quislings? Perhaps, G D (for that is what his buddies called him at boarding school before he was expelled by the padres) thought, there have been too many question marks placed in this particular paragraph. It was, after all – and careful not to make excessive use of the comma – time to move on with the narrative, calibrated to make it slightly more incomprehensible, yet not so much so that the reader rejects it.

A long moan escaped the lips of Gokarna Das as he watched the half-burnt logs dumped into the river by the dom’s assistant. Someone else could have misinterpreted the moan as a shriek, depending on which part of the Subcontinent she came from. But there was no mistaking the glint in his eyes as he looked up at the sky turned ochre, as happens during the receding monsoon, and turned abruptly to go up the embankment. He knew where to find Parvati …