General Pyar Jung Thapa takes over as Chief of Army Staff next week. He faces the challenge of fighting the Maoists without sullying the image of the army. 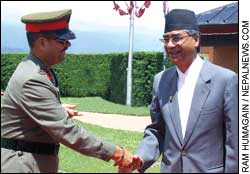 The monsoon is about to end, and together with it may come a renewed bout of bloodletting that the people can ill afford. The Maoists have clearly used the period to regroup and recruit. There are ample opportunities up ahead for them to exploit the multi-layered political confusion that is about.

The Royal Nepalese Army has established itself firmly in the centre-stage of Nepali polity even though till recently the soldiers had a strictly secondary role, demanded by the primacy of the royal palace. Since November, the RNA has become an active player in its own right. In addition to the duty towards maintaining the country’s integrity at this time of extreme stress, the generals now also have a responsibility to take maximum care while tackling the insurgency.

The short-term tactical goals of defeating the Maoists must be seen by the army against the larger strategic goal of maintaining national unity within an evolving democracy. The Maoists are exploiting failures of democracy to rip society apart by destroying horizontal linkages among the people. The military surely has higher ideals than those who are completely lawless.

Since November, the army has had to overcome its logistical and equipment shortfalls to fight a battle-hardened and ruthless Maobadi force. The army entered the fray after the guerrillas had already gained significant momentum.

The army’s strategy is clearly to try and break the back of the Maobadi, and force it into submission. But the experience so far suggests that it is too thinly spread and as has not yet mustered the required striking power. The army also seems to be addressing the expectations of the Kathmandu classes to have the war over with quickly.

All this has resulted in an unacceptably high level of civilian deaths, a fact well documented by the National Human Rights Commission, international watchdog groups, as well as the very diplomatic community that is keen to provide the army with support in the fight against ‘terror’. As one diplomat says, “The army is breaking too many rules when it should be taking the high ground and harder road against the cruelty and mayhem being wrought by the Maoists.”

Prime Minister Sher Bahadur Deuba’s government has neither the stature nor ability to exercise civilian control over the military. And with civil society largely cowed down, the army is left to set its own standards in the vacuum that exists.

In a country where there are a large number of grey and accidental Maoists, it has been difficult for the soldiers to draw the distinction. The bulk of the hardcore seems to have evaded the dragnet thus far. There have been many instances of multiple killings in “encounters”, and mistakes have not been acknowledged. The Defence Ministry reports list the dead, but no wounded and too few prisoners. This will ultimately create a backlash.

The volume of the army’s operations are necessarily at a quantum level higher than those carried out by the police during the 1997 Kilo Sierra Two in the midwest. The fallout of mistakes made today, unfortunately, will also be on a different scale, and last far into the future. The resulting militancy at that time may not even be Maoist, for fundamentalists of any hue can capitalise on the grievances.

There is no doubt, of course, that the army was called in to pick up the pieces after the politicians and Kathmandu’s powerbrokers had already managed to wreck democracy. But the army does not function in a vacuum either. It must look at what kind of victory is achievable, and should not countenance a total victory in isolation from political parties that will still be there tomorrow as representatives of the people. Also, thus far, the soldiers have tried to go it alone, forgetting that there are many civilian sectors that have equal if not more enmity with the Maobadi.

Some abuse will happen in the conduct of war, but a professional army needs to investigate and prosecute the guilty. A human rights cell has been created recently within the RNA. Can one hope it will be more active than its counterparts in civil society?

Many foreign governments have willingly supported the government and army to fight ‘terrorism’. They have no hopes from the Maobadi, but are now increasingly concerned over serious violations of civilian rights by the army. International human rights groups are on high alert, and are beginning to stir.

The RNA must respond to these early signs before the rapacious ‘parachute media’ discovers and descends on the ‘story’. Articles like the recent one in The Times of London on the June Thulo Sirubari incident will become more common. If the army’s image is tarnished, supportive governments will begin to distance themselves.

Because Nepal has been a popular tourist destination (at least until Comrade Prachanda ruined it), there is more international interest focussed here than in another similarly-placed country. There are therefore activists about, and they will raise a stink which otherwise supportive governments cannot ignore.

To begin with, this will result in cancellation of weapons deliveries and a shift towards providing non-lethal support for the army. The high-profile drama in Brussels last week with the near-collapse of the Belgian government will surely make other governments think twice over selling arms to Nepal. The army does need to upgrade its weapons, but how is it going to do it if its conduct in war is questioned?

The RNA and its individual officers and sipahis also have their own post-Maoist future to consider. By remaining strictly apolitical and fighting a relatively clean war, the Nepali military can continue to be a valued member of international peacekeeping fraternity and (having seen action) a sought-after force for the Blue Helmets. Indeed, it was even once suggested that the RNA organise a permanent peacekeeping force for the United Nations. But if (rightly or wrongly) the image is created of a force that does not follow the rules, then both the army and the national economy stand to lose a great deal.

As in days of old, the army brass continues to react with petulance to criticism. But such criticism is even more natural (and necessary) now that the RNA is no longer a ceremonial presence but a fighting force. Rather than simplistically label all commentators as “anti army”, the generals should try to get to the content of the analysis vis-a-vis the future of the country and the RNA.

General Pyar Jung Thapa faces the challenge of fighting the Maobadi, maintaining the image of the army, as well as preparing for the demanding task of policing the slated elections. He will be a political player in a position that is required to be apolitical.

There is an opportunity during this change of guard to adjust course and jettison the predecessor’s political and tactical baggage. The challenge before CoAS Thapa is to try and bring peace to the land with minimum innocent civilian victims. The public expects the army to deliver peace, but not the peace of the cemetery.