One wonders whether it is ultra-sophisticated analysis by the votary of ‘alternative politics’ or the fatally flawed reasoning of a politician in decline that had former prime minister and Maoist ideologue Baburam Bhattarai making presentations before New Delhi’s power elite in the first week of March. And why was he making statements that sounded sycophantic towards India’s leaders while denigrating his own Nepali peers? 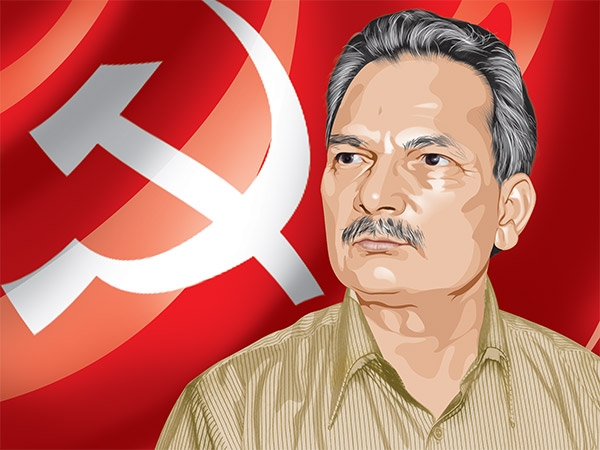 Bhattarai may have believed that the resultant unpopularity in Kathmandu will be more than made up by the brownie points gained in New Delhi. He may have overreached, however, which has required him to come out with a slew of defensive statements once back on home ground. Indeed, Bhattarai doth protest too much, and hopefully New Delhi is more alert to public opinion and political trends in Nepal—as well as its own geopolitical interests—than Bhattarai seems to give it credit for.

He who we know

But the Bhattarai we know is the one who drafted the 40-point agreement that drove the Maoists underground in 1996, so full of bitter ultra-nationalism and anti-Indian venom. We know the Bhattarai who claims that the Khmer Rouge atrocities are a figment of Western imagination, who orders the scuttling of court cases against accused murderers of innocents (eg. the late journalist Dekendra Thapa) , who wrote and circulated a Maoist ‘draft constitution’ that was a recipe for a one-party state, who tells a radical UK website long after coming above ground that the ‘extended people’s war’ remains the party agenda, and who denies the very existence of victims when he claims that the atrocities of the conflict era “must be understood in the material and historical context”.

The Bhattarai we know is also the leader who, as chair of the CPDCC of the Constituent Assembly (CA), sabotaged constitution writing for nearly a year by refusing to bridge polarisations and report back to the plenary on the substance of negotiations. Further, he carries the burden of having led the first CA into the cul de sac under his prime ministership.

Coming back to the present, why did Bhattarai depart for New Delhi even as the Maoist-Madhesbaadi rally was ongoing at Khula Manch on February 28? There would have been flights to India later that day. This seemed a deliberate snub to the rally participants, and one more attempt to flaunt his New Delhi ‘tilt’. In New Delhi, he did not take along Nepali Embassy note-takers, or his fellow traveller Krishna Bahadur Mahara, to the significant political appointments.

The core of Bhattarai’s message to his several interviewers in New Delhi was that the gains of the Nepali ‘revolution’ were being hijacked by interlopers who achieved power in the November 2013 elections. The poll results were a mere vote count, and the near-two-thirds majority in the House commanded by Nepali Congress and CPN-UML did not constitute the people’s mandate. It is one thing to demand that the politically ascendant forces be sensitive to the issues dear to those that lost the elections—and the NC and UML have been terrible at it—and quite another to accept an entirely new definition of elections in representative democracies, including for the writing of the constitution.

Among the many things that Bhattarai did in New Delhi, he sought to distance himself from China and Mao, tried to pin the Naxalite tag on the UML, and ‘tattled’ on Prime Minister Sushil Koirala and the UML chair KP Oli. He also advised the New Delhi Chief Minister Arvind Kejriwal to be humble in the conduct of politics, and warned against the use of ‘muscle, money and media’ in politics—the only response to which can be an indulgent grin.

Bhattarai often repeated his plea that reactionary forces had hijacked the agenda from the progressive change-makers. He saw no contradiction in telling one interviewer: “The old regressive forces have started reasserting and are trying to capture or retain the old state as it was and re-impose it on the people through the CA.” To the same interviewer, he claimed that ‘the old form of democracy’ was a failed experiment, whereas in Nepal Bhattarai had started the ‘people’s war’ within six years into the nascent democracy achieved in 1990.

In an attempt to cosy up to the present political constellation in New Delhi, Bhattarai tried to imply having had links, while still underground, with then Indian Prime Minister Atal Behari Vajpayee of the BJP, back in 2002. Whereas what had actually transpired was that the Indian PMO under the National Security Advisor, Brajesh Mishra, had responded to a bintipatra from Bhattarai (and Pushpa Kamal Dahal) by directing them to talk to the Indian intelligence outfits, which they dutifully did (ref: Prof SD Muni).

There is no doubt that Bhattarai, having tired of playing second fiddle for nearly a quarter century, would like to usurp the position of UCPN (Maoist) Chairman Dahal. This goal may even be within his reach, given the continuous slide of Dahal’s positioning in politics, but the question is what kind of party (and of what size) Bhattarai expects to inherit. (Hence, he also has an exit strategy, ie, plans for an ‘alternative force’ somewhat like Kejriwal’s AAP.)

New Delhi hopefully understands the dangers of buying into Bhattarai’s version of trends and events, because his is a recipe for further polarisation of Nepali society, leading either towards another collapse of the CA or delivering a constitution with inbuilt seeds of discord. The failure of the second CA would lead to a further pushback of stability and growth in this entire quadrant of Southasia, to the long-term detriment of not only Nepal but also Uttar Pradesh and Bihar. Further, the rigid positions such as Bhattarai’s are likely to contribute to the rise to extremism in Nepal, including of the religious variety.

Much of Bhattarai’s wooing of New Delhi’s policymakers is linked to the tie that binds New Delhi to the 12-point agreement of 2005, which helped bring the Maoists above-ground. But the NC-UML are also parties to the agreement, and their interpretation should count. Further, the Maoists have broken up into several parts since 2005, so Bhattarai can hardly claim monopoly of representation. Also, the Madhesi Morcha parties which are so much a part of the present polity are nowhere in that agreement, which itself dilutes its relevance.

Bhattarai’s most significant call in New Delhi was his invitation to the Indian state to be proactive on the peace process. But the goals of the 12-point agreement have already been met—the cantonments are long gone, and the transitional justice commissions have already been established according to the prejudiced dictates of Bhattarai’s own party. Opportunistically, he now would like to claim that the peace process is not over until the TRC has dealt with (and pardoned) all cases brought against accused perpetrators. This is a formula to keep Nepal in uncertainty for a long time and to make the CA irrelevant.

After his return from Delhi, Bhattarai has emerged as the most vehement roadblock to agreement between the political forces (the NC-UML and the Maoist-Madhesi front) to proceed with the process of constitutionwriting. Within the UCPN (Maoist), he maintains that the time is now to vehemently confront (‘bhidnu’) the UML-Congress combine through street action and  ‘aandolan’.

Indeed, Bhattarai seems to be the most significant spoiler to constitution writing as of this writing. His stance is against the CA, focussed especially on blocking a compromise formula on federalism and provincial demarcation. As he stonewalls and filibusters, Bhattarai seems to be working overtime to destroy the opportunity gained by Nepal’s people to write their own constitution.