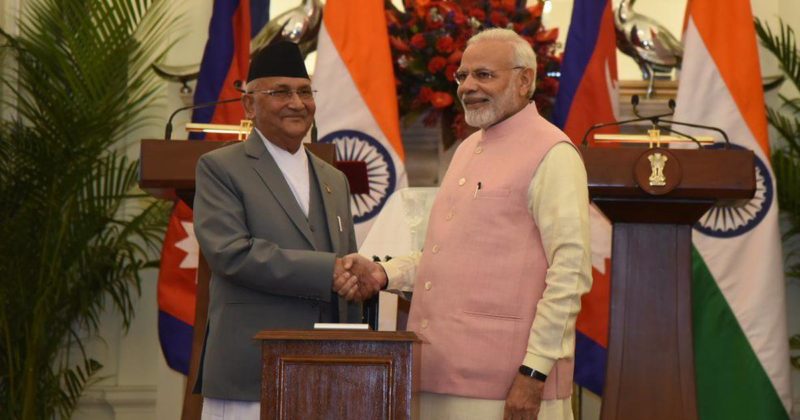 Delhi’s English media tends to speak the language of India’s ruling establishment when it comes to international affairs, particularly its relations with the South Asian neighbours. Far from acting as watchdogs, the journalists and commentators seek to represent the government, even acting as “force multipliers”. This weakness in civil society oversight is one reason India often makes foreign policy blunders, or is late to correct mistakes.

With Narendra Modi in Kathmandu for his third visit in four years, it is instructive to analyse the trajectory of the Delhi media’s coverage of Nepal, particularly the country’s constitution-writing, its blockade by India in 2015 and KP Oli’s two terms as prime minister. There is a clear transition in its position from adversarial to accommodating. The shift did not result from editorial introspection or journalistic independence, but from cues handed down by the South Block.

Across South Asia, the sections of the media based in capital cities which help define public discourse tend to toe the establishment line on foreign policy. Their reporters, editorialists and commentators usually lean towards ultranationalism. Even so, the extent to which the Delhi media is given over to following the South Block’s dictates while reporting on Nepal, Sri Lanka and Bangladesh is surprising. (India-Pakistan relations have a different level of complexity.) The English press makes little attempt to even camouflage this “handout journalism”: reports along the lines of “it is the considered view of the government that…” are commonplace.

Television news channels and the vernacular press, especially in Hindi, are even more state-oriented, but it is the English press that has the inside track on foreign policy and lays out “the line”. The growth of online English media offers hope of more balanced coverage – not least because their editors or publishers are clearly less in thrall of the South Block – but for now the lead on foreign coverage is taken by Delhi’s English press.

An organogram of the Indian media’s coverage of Nepal would show it starts with press handouts from the foreign ministry or selective leaks to favoured reporters at English newspapers. Reports based on the handouts or leaks then alert the online and vernacular media, TV news channels, editorialists, commentators and academia to the “line”.

While India became a decolonised democracy in 1947, its relationship with Nepal continued to follow the viceregal tradition of the British, even tilting towards hegemony. The Kathmandu polity’s capability to respond to Delhi’s diktats was progressively weakened as Nepal lurched from the royal autocracy to the Maoist conflict and the subsequent transition to republic. The first generation of Nepali democrats provided a security umbrella owing to their personal stature in India, but as they passed on, Nepal’s affairs came under the control of middling diplomats and apparatchiks.

While the Delhi media stayed loyal to India’s official position during Nepal’s constitution-writing, especially as related to the delineation of the new federal provinces, Kathmandu’s press was unable to influence the narrative in India or internationally. Its analyses and critiques of India’s policies, and of the Indian media, were largely restricted to national consumption in the Nepali language.

The Indian establishment’s way of pressurising Nepal to frame its new constitution as Delhi wanted was to emphasise that “the aspirations of all communities and regions” be accommodated. When the Constituent Assembly ignored Delhi’s prescription and adopted the constitution, the South Block issued a press statement “on the situation in Nepal” which simply “noted” the adoption.

India’s use of veiled language and the Nepali polity’s sensitivity to it was illustrated by the contrasting receptions Modi received during his previous visits to Kathmandu. In 2013, his praise for the Nepali state and society elicited a standing ovation in Parliament and applause from the public. In 2014, when he advised of the “need to take all sections of society on board the constitution-making process”, the seemingly innocuous-sounding terminology was enough to alert the Kathmandu polity that the Indian prime minister had “flipped”.

In September 2015, India imposed the economic blockade on Nepal within a week of the constitution’s promulgation. The Delhi press largely cheered or looked the other way. Oli’s rise to power later that year only coarsened the media coverage.

Analysing the coverage of Oli’s two state visits to India shows the Delhi English media’s reliance on cues from the South Block. Oli took office as Nepal’s prime minister in October 2015, a month after the constitution was promulgated and six months after an earthquake wrecked a vast swathe of the country. The crippling five-month Indian blockade imposed during his predecessor Sushil Koirala’s tenure remained in place. Oli reached out to China, signing a series of connectivity agreements.

Wary of losing its influence in Nepal to China, India invited Oli for a state visit. Oli made the lifting of the blockade a precondition for his visit. Delhi did so in February 2016. Oli toured India from February 19 to February 24, but the two prime ministers could not even agree on releasing the customary joint statement.

The Delhi media continued to present Oli as a Nepali upstart who would not listen to India’s advice. Indeed, a study of the Delhi English media’s coverage of the blockade shows that it faithfully toed the South Block line, with even arch-liberal opinion-makers on domestic issues turning hawkish when it came to Nepal. In addition to the regular output of reporters and editors, there was a series of articles by successive ambassadors to Nepal who weighed in on the side of the South Block, vigorously supporting the blockade.

A particularly brazen attempt at legitimating the Indian policy was made through a reporter known to carry official leaks on Nepal. Writing in the Hindustan Times, he urged India to use its “range of tools, both overt and covert” against Nepal, adding that “there is little point in being a regional power if you don’t exercise it at decisive moments”. It was a revelatory moment seeing the editorial desk of one of India’s largest English dailies allowing this call to act, by means fair or foul, against an independent neighbouring state.

When the Oli government fell in July 2016, it was gleefully projected by Delhi’s English media as the return of Indian influence on Kathmandu. It was as if India had won a major victory on the battlefield; there seemed no need for deniability in unseating a head of government. MK Bhadrakumar, a former Indian diplomat who is among the few commentators outside the South Block’s circle of influence, compared the mood in Delhi to when Maithripala Sirisena had defeated Mahinda Rajapaksa in Sri Lanka two years previously.

The Delhi media’s diatribes against Oli continued even after he went into the opposition, and the Maoist chief Pushpa Kamal Dahal became the prime minister with the support of the Nepali Congress’s Sher Bahadur Deuba. This was exemplified in a programme on Rajya Sabha TV, where a former diplomat said the return of “Oli and his gang” to power would be a major setback to India’s interests and that Indian agencies should play a role in shaping events in Nepal. But while Delhi was deriding Oli through its voices in the media, he was busy overcoming his distaste for the Maoists and preparing to fight the provincial and federal elections in collaboration with them. The national elections, held in late 2017, delivered a clean sweep to Oli’s coalition, presenting Delhi with a fait accompli.

Modi, who has had to learn the hard way that Nepal marches to a different drummer, found it necessary to reconcile with Kathmandu. His outreach to Oli, then prime minister-in-waiting, began with Foreign Minister Sushma Swaraj’s out-of-protocol visit in February 2018. Oli was invited to India as prime minister in April and now Modi is back in Nepal. The Indian prime minister seems to have decided that normalising relations with Nepal is a necessity, not least to show some success for his much-hyped “neighborhood first” policy as he goes into the 2019 general election.

As the Indian establishment changed tack on Nepal, the call went out to Delhi’s English press that Oli was now “kosher”, to be treated with due respect and without invective. There is no saying how long this evolved dynamic will last, of course, but it is clear to India-watchers in Kathmandu that the wind had turned.

Suddenly, opinion columns were emphasising Nepal’s status as a sovereign state with Oli as its democratically elected leader. Respecting Nepal’s independence and “agency” became the leitmotif of media coverage, as when the strategic affairs analyst C Rajamohan noted that the Nepal-India relationship has to rest on mutual respect. Others such as former envoy Rakesh Sood called for a “fresh start”. Many commentators now readily accept that India applied coercive economic measures against Nepal in 2015, though most are still loathe to use the term “blockade”.

The use of hostile language against Oli has evaporated as well. Previously, his name would come attached with qualifiers such as “arch-conservative”, “pro-China”, “anti-India”, “ultranationalist”, now it is all about friendship and equality, trade and development.

It is interesting that South Block has shifted gears on Nepal without any apparent concession from Kathmandu. After all, the constitution on whose promulgation the blockade was predicated remains in force and Oli is still expected to play ball with China. Yet, the Delhi media’s coverage of Nepal and, specifically, Oli is now dramatically modulated. In Nepal, meanwhile, a public demand for an Indian apology reached a crescendo this week, timed to Modi’s arrival, of course, but the Oli government seems willing to accept the tacit admission of mea culpa. That is what Modi’s ongoing visit seems to be mostly about: an attempt to pick up the pieces of his Nepal policy. The Delhi media can be expected to play along.

Kanak Mani Dixit is the founding editor of Himal Southasian magazine. Tika P Dhakal is a political analyst. This article is adapted from a paper presented at the Madan Bhandari Foundation, Kathmandu, in April 2018.