When we import alien contraptions, we lose our bearings. Southasians, particularly those in the monsoonal Subcontinent where water is abundant, like the idea of wet bathrooms. Wholesome water, from the well, step-well, pond or rivulet, is used copiously for bathing and ablutions. 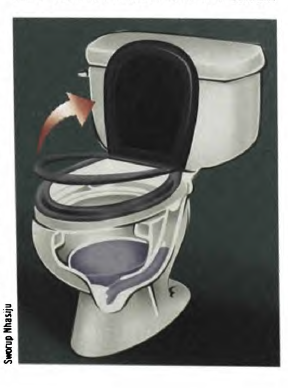 Enter the dry bathroom and we lose all mooring. There is the shower to mimic weak rain, but the greatest pleasure of all – the full bucket of water to wash over one’s head, shoulder  and flanks in a rush of cleansing, splashing aqua – is wrested. There used to be copious use of water to keep the potty surroundings clean and odourless. Today, the middle class tries rather unsuccessfully to marry its water-filled past with the demands of an arid, waterless washroom, where the floor is tiled and even carpeted, you are meant to sit rather than squat (do not even talk about the rigidity this introduces to the Southasian spine), and the commode warns you not to spill, divert or reroute. The menfolk, in particular, have not been culturally groomed for this, which brings us to the topic of: What to do with the toilet seat in Southasia?

The sitting commode was adopted and popularised in the West, where presumably the majority of the menfolk have been taught – or threatened – to keep their urine from splattering the seat. The males too have to go there on occasion, after all, while the womenfolk always have to. So it is a legitimate, correct demand of the ladies that the menfolk lift the commode seat when they urinate. More importantly, the vehement demand is that the menfolk return the seat to the sitting position to make the seat available for the next lady who comes along, ensuring in the process that the seat is sanitary, and without the totally unhygienic and aesthetically horrendous spots and stains that we all know so well.

Of course, I have no problem with the philosophical wellspring of the above procedure, which the ladies in Southasia ladies also tend to demand of the male users of the commode. However, there is a problem that has to do with the cultural distance the Southasian male has to travel to get to where you want him to stand.

Firstly, your average Subcontinental hombre is used to the wet bathroom, so is culturally removed from the dry, tiled surroundings. Secondly, he is sociologically unaccountable, in this land of impunity, to the idea of leaving the toilet as clean as he found it – he is predisposed to do the opposite. Thirdly, culturally disoriented as he is upon entering the dry toilet chamber, he is unable to be empathetic to all who have to sit on the toilet seat after him. That would be too much to ask. He will therefore proceed to untap into the commode without lifting the seat. We cannot expect that our Average Joe (Shyam, Altaf, Tenzing) will lean over, lift the seat, carry out procedure, and then lean over again to gently bring the seat back to Position A. That is backbreaking work, and please don’t ask nor expect. Fourthly, even the most naïve will not for a moment believe that the stream will land directly in the centre of the oval, for there is always the matter of mistaken targeting, collateral flows and wind direction. And unsteady foundations – for inebriated men do visit toilets occasionally.

If such is the situation on the ground, and in the lavatory, why would women (and men) insist that the cultural Neanderthals place the seat in the down position as they leave? That presupposes a level of awareness that the vast majority of menfolk do not have; this is not an accusation, but a fact of life and living. (This is not to necessarily cast   aspersions on the ethics and intelligence of our male Neanderthal ancestors.)

Asking that the toilet seat be put in the down position might be okay in New York and Paris, but I am not sure even of that because Neanderthalism pervades the entire planet. But to insist on that procedure as de rigueur simply means to invite contagion. The possibility of germs and infection expands exponentially when you insist on the toilet seat being brought down, as a show of respect to s/he who comes after you. It is a matter of whether you want respect-with-infection.

For Southasia, at least, my suggestion is that we insist that the seat be placed permanently on the ‘up’ position, so that it is kept spotless and ready-to-use as and when required. The new-fangled toilet seats in private and public spaces (including aircraft lavatories) these days come with seats that are mechanically programmed to arc downwards. That is foolish, if you have followed what I mean. The seat, instead, should be spring-activated to revert automatically to the ‘up’ position after use. The service-seeker who enters the washroom will simply have to gently lower the seat and, when s/he is done, the seat will automatically lift back up.

There is no need to ape the West, and sometimes it is important to go by the cultural gender-sensitivity index of Southasia. The commode might have been invented for the dry washroom of the West, but we should know to adapt it to our wayward habits.