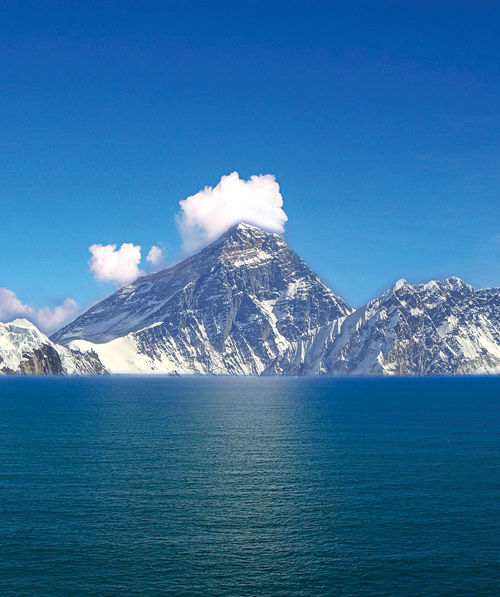 The Law of the Sea is vital for Nepal as a country land-locked, because it enshrines the right of transit, as well as confirms rights over the resources and possibilities of the high seas. And yet, the Law of the Sea does not receive due attention in Kathmandu, even though Nepal suffered the Great Blockade of 2015 and earlier in 1989-90, and even though a Nepali diplomat-politician played a key role in getting the Law of the Sea off the ground in the mid-to-late 1970s at the United Nations.

He was Shailendra Kumar Upadhyay, and while Nepal’s Permanent Representative to the United Nations at a time when the country had a far higher international profile that it has now, he was involved as key negotiator in the talks that evolved into the UN Convention on the Law of the Sea (UNCLOS). Besides Nepal, the flamboyant Upadhyay represented the land-locked and least developed countries at the negotiations, which led to the Convention being ultimately signed in 1982, coming into force in 1994.

Nepal’s right to transit gained sudden prominence when the KP Oli government inked agreements in Beijing for third country access via China in March 2016, and there may come a time when this route becomes viable. However, for now, and given the proximity to the Bay of Bengal, the transit right is important for the passage it allows to Calcutta, Haldia, Vishakapatnam, or traversing India to the Bangladesh ports of Mongla and Chittagong.

However, Nepal’s interest in the Law of the Sea should go far beyond transit rights. Yes, access to ports allows Nepal to import and export goods, but the Law of the Sea means so much more that. By now, there should have been vibrant Nepali scholarship on how Nepal as a country can take advantage of the high seas and deep oceans as the common heritage of humankind.

But we remain locked in ‘landlocked mindset’, acting as if discussion and decisions on the high seas, including those relating to ‘our’ Indian Ocean, are reserved for the littoral states. At the very least, Nepal should be facilitating discussion among the landlocked countries of South Asia, convening meetings with Afghanistan and Bhutan to develop a joint position.

UNCLOS, which represents a largely successful effort to codify as well as evolve customary law regarding the oceans, provides a graded level of rights and obligations to the littoral states, through territorial waters of 12 nautical miles off the coast, to the Contiguous Zone of 24 nm, and the Exclusive Economic Zone (EEZ) of 200 nm, including the Continental Shelf. However, says the Convention, in terms of passage, resources and environment, ‘the high seas are open to all states, whether coastal or landlocked’.

Thus, the opportunities as well as the obligations that apply to the open sea apply to Nepal. These include the possibility of being a ‘flag nation’ plying ships in the oceans, with Chittagong or Calcutta as home ports (though it could be anywhere else). Incidentally, the Panchayat era did see Nepal launch the Royal Nepal Shipping Corporation and one ship (named after the queen of King Prithvi Narayan) was purchased, but the project sank.

The oceans as world heritage, covering two-thirds of the globe’s surface area, are suddenly being weakened and depleted, before landlocked countries like Nepal have even woken up to the promise of UNCLOS. The extreme dangers include over-fishing in all the oceans, as well as the catastrophic spread of plastic and other wastes. Nepal acts as if none of this is of its concern.

There is today an active push to exploit the deep ocean floor for minerals, a sensitive matter on which Kathmandu must take keen interest and have a point of view. It should be active in the various bodies born of UNCLOS, including the International Seabed Authority, even as the exploitation of the Atlantic, Pacific, Indian ocean floor gathers steam, not to forget the Arctic and Antarctica regions.

Nepal should not remain content speaking on behalf of high mountains alone. It must become vocal on all aspects of use of the high seas, including transport, pollution, seafood/fisheries, seabed mining, security. There is no reason not to do it, and Shailendra Kumar Upadhyay would have approved.

Postscript: Shailendra Kumar Upadhyay (right) was an unconventional politician, who started out as a Communist but turn-coated to join the Panchayat regime of King Mahendra. Over the years, he was rewarded with a string of important assignments, including foreign minister. Upadhyay followed the footsteps of Rishikesh Shaha in providing dynamic presence in New York as Nepal’s Permanent Representative to the United Nations between 1972-1978. Ever the maverick, in deep retirement at age 82 he trained to climb Mount Everest, and he died in the attempt on 9 May 2011. One day in about October 1988, while walking out of the UN General Assembly building where I worked as press officer of the UN Secretariat, Foreign Minister Upadhyay was coming the other way. We chatted, standing there on the kerb, and I informed him of my plan resign the job and move back to Nepal. His answer is etched in my memory: “Kanak, don’t leave the sun for the shade.”