I confirmed this fact a couple of weeks ago while attending a conference in Beijing. The organisers delivered us at Badaling, beyond which lay the Mongolian wastes from which the emperors of the Middle Kingdom had wanted protection, for which the Great Wall was built. Down along the valley, the Great Wall is truly grand – massive battlements, cornices, watchtowers and an intricate mix of carved rocks and bricks of various sizes, all of which is held together by great dollops of lime mortar. Equally stupendous is how the wall snakes over the mountains, jumping from ridgeline to ridgeline, enough to make the Mongol shudder at the thought of rape and pillage. 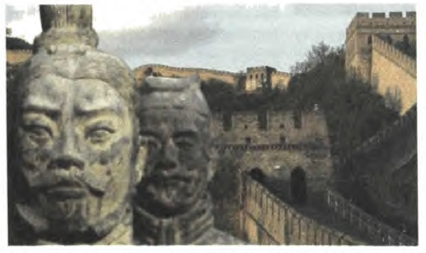 As a jaded Southasian who believes that any state-sponsored construction project will perforce be short-changed, I decided to go to the end of the line, where tourists are discouraged from entering – and intrepidly proceeded further. And there you had it, staring you in the face: proof of corruption over two millennia ago, as if the heist had been done the day before yesterday. You see, the moment the wall gets past the first ridge, where it would have been out of the imperial entourage’s line-of-sight, the height and width of the wall diminishes to nearly half of what is grandiosely shown off at Badaling. The finely hewn stone at the valley base are replaced by coarse blocks; and from the broken sections, it is clear that someone was slacking off on the lime mortar, which is used only on the exterior joinings while the inside is full of debris held together only by gravity.

That was not all. Past the third ridge, the Great Wall diminishes to Medium-Sized Wall, and thereafter to Small Wall. Finally, it devolves into a mere pile of rubble placed along the ridgetop. Just where the view would have been completely obstructed – even for the conscientious telescope-wielding auditor, while the emperor was busy engaging the Mongol emissary – the wall is nowhere to be seen. Now, the only thing left to dissuade the invading horde would have been the craggy terrain. To my inspecting eye, there was really no reason why there was a wall up to this point and not beyond, other than that someone skimmed off the budget allocation.

We need to visit the national archives of the Qing or Ming Dynasty period, to see whether the Auditor General had conducted an investigation, and if the guilty contractor was ever punished. Chances are that he shrewdly paid off all potential persecutors, from the jailor to the prosecutor, as well as the Auditor General himself, the imperial chamberlain and the dowager empress. If the Middle Kingdom was anything like the Hindustan of yore, the legacy of which lives on in the form of excessive mausoleums in white marble, I would hazard that the emperor himself was in on the Great Wall Scam.

Of course, the emperor had originally planned for the Great Wall to be visible to the naked eye from space, but he would have known that the skinny version that emerged under his watch would not be. Confronted with the matter of legacy and heritage and blah-blah, he would have then responded, “Marey pachhi dummai raja.” (Nepali for, “Who cares how great my Great Wall is, after I am reduced to ashes? No one, so let me not care for who says what in the hereinafter.”) And so, it is this top-to-bottom corruption and concomitant lack of transparency and accountability of many centuries ago that explains why the Great Wall is not today seen from space. That is why, when the Chinese astronaut Yang Liwei went into space in 2003, he reported to his 1.5 billion-strong incredulous earthling compatriots that he could not – repeat, not – find the Great Wall, nor the map of China, as he had been told.

We Southasians are not surprised that someone made a killing from the imperial coffers, including the badshah himself. It is just that the Chinese are so … gullible. Let me present one more artefact as evidence before the court of public opinion. In China, there was an order for one life-sized model of a nobleman in terra cotta. Instead, thousands were produced from the cast made for one, and the bill subsequently forwarded to Beijing. After payment was received, all of the excess statuary was buried. When the so-called terra-cotta warriors were recently unearthed, everyone north and south of the Yangtze took this as a treasure trove that once again proved the resplendence of the imperial past. Bu the Indians, Pakistanis, Nepalis, Sri Lankans and Bangladeshis would never have been so naive as to think that a vendor trying to cover up his misdeeds was actually part of a magnificent history.

This is all worrisome. If the future of the world is now in the hands of Southasia and China, as the American scholars tell us, should it not be a matter of concern that one of us is so vaingloriously oblivious about the ways of history? A bit of ‘re-education’ is clearly in order, so that we are on the same wavelength in the near future. Not self-criticism, just re-education.

Only then can we together rule the world.