India’s Atal Bihari Vajpayee did not have to let go as prime minister in favour of a national unity government when an earthquake struck Gujarat in 2001. Begum Khaleda Zia did not resign when a cyclone killed nearly 150,000 people in 1991. 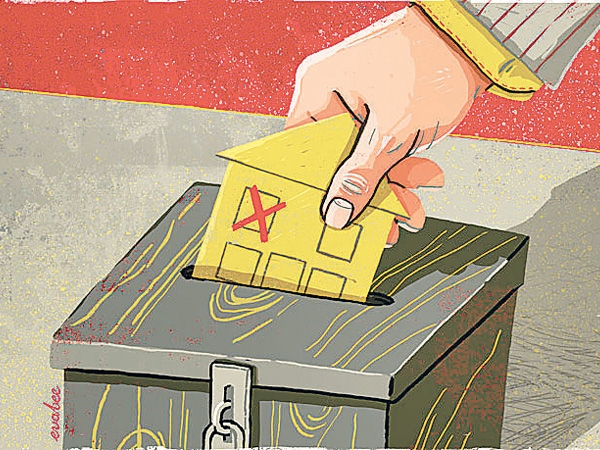 None of the heads of government from Indonesia to Thailand, Sri Lanka and Maldives, so far as one can tell, were made to head out of the door due to the 2004 Indian Ocean Tsunami. Prime Minister Naoto Kan of Japan did fall victim to the long drawn-out aftermath of the 2011 tsunami, including the Fukushima disaster, but he did not exit till five months after the tsunami.

A natural disaster is a time to rally around the government-in-power, of whichever party or coalition, and also to challenge it to deliver on rescue and relief. It is a time to exhibit human decency, to not exploit a mass tragedy to force fall of the government.

Only in Nepal are things required to be different, and so before even the earthquake dust has settled you have those who could not get into the government fair and square through elections—and who even failed in agitations, bandhs and assorted skulduggery—wanting to use the April quake and continuing aftershocks to advantage.

So why are people rooting for a ‘national government’, bringing down the Sushil Koirala cabinet and also expanding it to include the UCPN (Maoist) and Madhesi Morcha? Let us put aside for now the unconfirmed reports of the dark forces actually involved in a signature campaign to oust the Nepali Congress from the government and replace it with a UML-Maoist-Madhesi Morcha combine.

The attempt of the powerbrokers is obvious enough, to propel the forces they favour to enter the government and parliamentary process be damned. The Morcha leadership is keeping its own counsel, largely maintaining decorum, while the UCPN (Maoist) party is breathless, with all the running around Pushpa Kamal Dahal and Baburam Bhattarai have been doing.

The UCPN (Maoist) plan is obviously to try and kill several large birds with one convenient stone. Firstly, you get to move into the government even if the voters did not trust you with the parliamentary numbers. Secondly, as part of government you can try and sabotage the transitional justice process that seeks accountability for wartime crimes (the Army too would be happy with that). Thirdly, it will be that much easier to disrupt from the inside the campaign for local government elections.

Fourthly, you can try and halt investigations into financial irregularities of the peace process and also try to legitimise the unaccounted money that has been floating about these past few months. Lastly, you can partake in spending the big reconstruction budget, and what better way to divide the spoils than through the horrendous all-party mechanism that was perfected by the Maoists after the 2008 elections?

The demand for national government is apolitical, from whichever angle you look at it. The present coalition is actually already a ‘national government’, in that it is made up of the Nepali Congress and CPN-UML, ideologically opposed forces who command nearly two-thirds majority in the Constituent Assembly/Parliament.

Further, to command the title ‘national government’, you need to include all significant players, whereas the puppeteers want only the Maoists and Morcha. They would hardly want to include Kamal Thapa’s RPP-N, nor the parties of veterans like Narayan Man Bijukchhe and Chitra Bahadur KC.

If the Maoists and Morcha leaders had plans for long haul politics, they would have wanted to remain in opposition rather than enter through the backdoor. This would have allowed them to point out irregularities during the reconstruction period and gain public support to be used in future innings. If they wanted to do anything more than participate in the reconstruction spoils through the all-party-mechanism, the Maoists and Morcha would have backed rather than thwarted local body elections, campaigning on the plank of the Koirala government’s weak response to the April earthquake and the floods of last summer.

The damaged state of our polity is seen in how the very individuals that prevented local government elections over eight long years are able to strut the stage even after the earthquake. The commentators who successfully worked to prevent the VDC, DDC and municipality-level polls have no compunction in being even more insistent.

These naysayers proposed that the federalism agenda would be derailed with local government elections, and were unwilling to consider formulae that would do no harm to Nepal’s conversion to a federal republic. They have shown no sensitivity to the fact that the earthquake rescue and relief efforts would have been much more effective had there been elected and accountable village, district and urban representatives.

These politicians and commentators should be contrite, given the additional tragedy visited on the citizenry because of their stand. And they should also be reconsidering their position today, given the possibility of massive embezzlement during the upcoming reconstruction phase. But they seem  programmed to shout even louder against participatory local democracy.

If there is one aspect of Nepal’s polity that is our pride before the world, it is the self-help spirit at the grassroots and the communitarian management of the commons, as indicated by the late Nobel laureate Elinor Ostrom. But there is so little rigour to drive our political discourse that the polity is hell-bent on not reviving the local bodies even though they constituted one of the most successful exercises of local governance in all South Asia during the brief two-term flicker from 1992-2002.

For all the mouthed support they have expressed for local polls, and even with the Election Commission ever-willing to organise them with a 90 day notice, the UML and Nepali Congress seem to have become fellow-travellers with the Maoists and Morcha on not making the elections happen. The big two seem to have seen the possibility extracting hefty profits from local expenditures in the reconstruction era.

Among the diplo-donors, a few actively campaign against local elections, due to unfathomable geo-strategic concerns and the fear that the polls would only weaken further their favoured political parties and factions. To this, one can only exclaim—what denigration of the democratic spirit and of Nepali voters of the hills, plains and mountains!

There is one category of ambassadors and aid agency heads that have consistently spoken up for local polls, though they have not been heeded. However, the inability to hold local elections for a dozen years now is a glaring failure of Kathmandu’s civil society and intelligentsia—the commentators, activists, academics as well as the office-bearers of the erstwhile VDC, DDC and municipality federations.

Each of us should analyse our inability to politicise this important issue, to the extent that the politicians never felt the pressure. Introspection is needed, so that we can work to make local elections happen by November 2015.

Some demands can be made of the diplomats and donors, some of ourselves. Those in the international community so keen to assist Nepal in post-earthquake reconstruction need to ask the question clearly to that the party bosses: How can the pledging conference of  June 25 be credible in the absence of plans for elected officials at the VDCs, DDCs and municipalities? How can you expect us to contribute large sums when there will be no one accountable for the planning and expenditure?

The members of civil society and intelligentsia have to look inward— why/how is it that we have been unable to make a political cause of elections for local bodies? Why have we not been able paint those who oppose local elections as, simply put, anti-people? Is it not time to do so?

The question to end with is this: do we respect the people enough to ourselves organise a successful political campaign to force the political firmament to agree on local government elections in the autumn?

Previous Post: In Nepal, the politics of reconstruction
Next Post: Civic Appeal on Disaster Management and National Reconstruction