I was recently asked by a friend to write a story, ‘an imaginative, creative one’. There have been those who have remonstrated at the ease with which I am generally able to cook up a story and serve it up. But this time it did not work, for someone who claims that he can simply glance out of the window, or even at a blank wall, and come up with a dozen ideas. A tale just did not take shape. 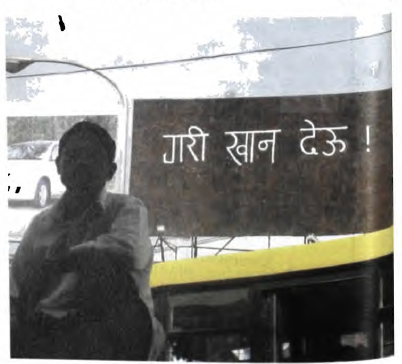 Looking out of the window, there was the huge pipal tree, the rowdy crows, the traffic below, an Airbus landing across the valley, the scorching sun – but nothing crystallised. Funny short-story titles did come to mind: ‘The Papal Pipal’, ‘The Crow Who Stole the Cellphone’, ‘Missed Approach, Cow on Runway’ or ‘How to Cross the Road When the Tarmac is Sticky’. But none moved from title to parable.

So, I decide to drive to town in search of a – narrative. Umm, this tarmac is new and smooth, they have laid it overnight and covered the potholes. The financial year is just about to end, so they have to disburse. Easier to spend it on an extra layer of macadam than to put in a footpath or provide wheelchair access. This would make an investigative report, but hardly an enjoyable tale.

Drive over the Bagmati, the river that has become sewer. Every so often, a whiff comes up to where I live, and tragically one is forced to say, ‘Bagmati ganayo’ – the Bagmati is smelling. Not an uplifting tale; drop it for now.

Across the bridge, on the Kathmandu side, there is one hoarding board (see pic) on which someone has scribbled in large white brushstrokes, Gari khana deu!Maybe one could build a story around that plaintive demand, aimed at the political powerbrokers – please, let us get on with it! Allow us to work, demand rule of law, generate employment, enjoy pluralism, end public violence, and give us peace, peace, peace…

It is obvious that the ability to spin an easy yarn has been compromised by the day-to-day pummelling of politics in a society in transition, on edge for too long. Have the cells on that sub-lobe of the brain, those that manage short, fun fiction, been colonised by those that survive off of trauma and tragedy? Did the storytellers who preserved the jataka tales ever feel this loss of creativity, suddenly one day?

There are a lot of people on the street, there is this never-ending queue – thousands upon thousands of young adults lining up to receiving Korean-language forms, in order to apply for a job intake announced by the Republic of South Korea. Up the slope and past the stadium, I notice that the four-tonne equestrian statue of the Rana progenitor Jang Bahadur is now too close to the overbridge that has just been built for the sake of pedestrians who shun use it.

In a country where the quality of recent statuary is quite abominable, this bronze sculpture, cast in England a century ago, looks attractive. But one notices that the sword of Jang Bahadur has been snapped off. Perhaps there is a story-with-a-message in there somewhere? ‘The Shogun and the Sword’? It is easy to cook up a political diatribe and generate an audience, but I have been asked to write an enjoyable story.

Near Rani Pokhari, the Queen’s Pond, the microbuses rush past each other, not only because there is a dearth of traffic regulation in this progressively lawless land, but because mathematics is also not taught properly in school – thus, the bus drivers do not seem to realise that if you stay behind each other and pick up passengers when your time comes, it all evens out in the end. Physics, too, is not taught very well, which is why young mo’bike hot-rodders do not understand the mass-times-velocity equation. They need to have a bang-up to finally understand that one. No, none of this will do.

Rani Pokhari (pond in Nepali, as in pukhuri in Asamiya/Bangla), it should be remembered, was built by King Pratap Malla in the mid-1600s to console his queen for the loss of their son. Now, it is visited by sisters who are missing their brothers during Bhai Tika, the Day of the Brother, during the autumn Tihar festivities. Hmmm…

I sense a stirring in the air. Can it be that the westerly wind of yesterday has suddenly, finally, turned easterly? The clouds are no longer locally generated cumulo-nimbus, but part of the front coming in from the Bay of Bengal. The monsoon has arrived, if late, and here is a Madhesi vendor with a basket full of Malda mangoes. I will have a mango. You have one too.