Last week, as the world’s highland countries were in Kathmandu to discuss climate change, and as the Great Himalayan Trail-wallahs approached the end of their odyssey, two Himalayan events were also held in the capital. One was the launch of the book Five Treasures of Great Snow: The Story of Kangchenjunga by Norwegian mountaineer Jon Gangdal. The other, the opening of an exhibition of wide-format Khumbu photography by American mountaineer and mountain portrait-artist Jeff Botz. 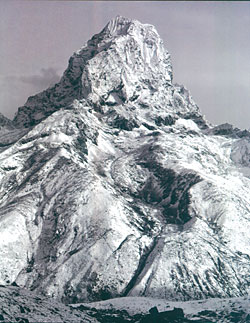 Gangdal’s work is a competent history of all Himalayan mountaineering woven around his own climbs ending with the ascent of Kangchenjunga in 2009. The photo exhibition is a loving black-and-white tribute to Sagarmatha-Chomolongma and nearby massifs. The book is printed and published in Nepal in high quality, while the pictures are exhibited at Image Arc gallery at Kulima Tole in Patan.

Gangdal writes of his own mountaineering journey in the self-deprecating style of the great Himalayan raconteurs. For those of us who grew up on the lore or Mallory, Tilman and Shipton, he opens up the world of early non-English explorations of the Himalaya. While we know a bit about the French, mainly because of Maurice Herzog’s Annapurna, the author reminds us of European climbers beyond the English-rendered accounts.

The legacy of Norway in Himalayan exploration is an eye-opener, for a country that is known to Nepalis today almost exclusively as a ‘donor’. Long before even Amundsen made his mark as a polar explorer, in 1907 two 21-year-old Norwegians pioneered on Kangchenjunga. Carl Wilhelm Rubenson and Ingvald Monrad Aas understood the value of the native porters, writes Gangdal, a sharp departure from the ‘colonial expedition leaders from countries with strong imperialist traditions, whose style of leadership can be observed even today’. The author quotes from the historical work Fallen Giants, that Rubenson and Aas were ‘the first to discover and publicise the remarkable mountaineering abilities of the Sherpas’.

Gangdal’s own desire to climb Kangchenjunga was fired by the ‘low celebrity status’ of a mountain whose name was so difficult to spell, the high rate of expedition failure on the ‘least known and riskiest of mountains’, its difficult approach, challenging weather and the lack of mountaineer traffic on the flanks.

The author unearths rare archival material on the German explorations of the Himalaya between the two world wars, starting on Kangchenjunga with Paul Bauer in 1929. Discomfort with the Nazi era, replete with the Swastika flag on the Himalayan glaciers, seems to have led to some timidity among the Germans from claiming their rightful role in Himalayan exploration, but history is history, says Gangdal.

Like so many mountaineers who develop deep links with highlander societies, Gangdal devotes himself to the upliftment of the Rolwaling people in Dolakha District who live beneath Gauri Shankar-Tseringma. He got attached after losing a Rolwaling Sherpa colleague on Everest in 1994. In April 2002, with Nepal caught in armed conflict, Gangdal and his brother unfurled on the summit of Manaslu a khada on which  was written: “Peace in Nepal: Please stop killing, start talking!”.

The author devotes considerable space to the Italian alipinist photographer Vittorio Sella, who explored the Kangchenjunga region as earlier as 1899, lugging a 30×40 cm large-format camera and tripod. Sella gifted posterity with fine Himalayan photography that is instructive till this day, including images of the Lepcha-Rong people who lived at the base of Kangchenjunga.

The American Jeff Botz is the modern-day incarnation to Vittorio Sella, though Botz’s own idol is Ansel Adams, photographer of the American West. While trekking in Nepal in the 1970s, Botz realised it was impossible to do justice to the high himals within the 35 mm frame. He taught himself to use a 10×14″ camera, which he carried around the Upper Khumbu to expose poetic images.

Botz introduces in exquisite detail the rock strata, overhangs, icefalls, seracs and snow fields. The views are unique even when the vantage point is standard, as in Thamserku from Tengboche, Everest from up on Gokyo, or the Khumbu Icefall close-up from the Base Camp. Botz’s capture of the summit pyramid of Taboche, in this writer’s eyes, shows a mirror image of Ama Dablam standing across the valley, the same streaks of ice at the top and identical tilt of the torso (pictured, overleaf).

Author Gangdal and the Image Arc gallery could perhaps help bring a Vittorio Sella exhibition to Nepal in collaboration. The book and the exhibition both represent, one hopes, a barometer of the times. Peace is returning, and with it the alpinists and photographers willing to write, photograph, print and publish. All of which can only help Nepal make up for the lost decade-and-half.