Nepal’s political parties have over the years dug themselves into a pit of non-credibility.

Their detachment from the national interest and petty behaviour hurts the country as it tries to tackle the Maoist insurgency. The parties are on a confrontation course with the king, who seems to want to remain in the centre of things. On 30 April, King Gyanendra’s appointed prime minister Lokendra Bahadur Chand resigned after the parties launched a street agitation. The king then asked the parties to choose their own prime minister and cabinet, possibly in the hope that they would never be able to agree among themselves. 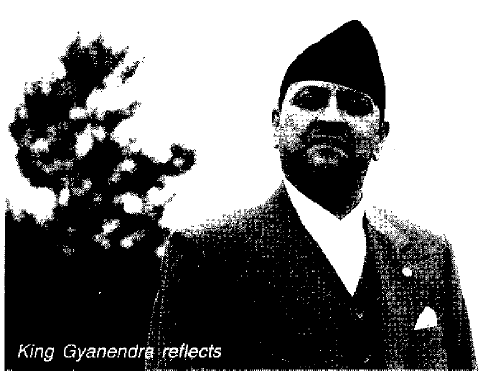 The talk in Kathmandu’s diplomatic and donor circles that wield inordinate influence over the country’s national affairs is dominated by exasperation with the political parties, who ‘just do not seem to get it’. The conventional wisdom is that the king is trying to set the country on the right track, and the parties are playing spoilsport despite 12 years of bungling while at the helm.

What is forgotten in these top-circle conversations is that the prelude to the dozen years of undoubtedly messy multiparty democracy was three decades of autocratic rule by the palace. Memories of the Panchayat system, in place for 30 years until political parties won democracy in 1990, should be enough to discourage all desire to return to a palace-administered polity.

12 years of democratic governance ended in October 2002 when King Gyanendra abruptly dismissed the Sher Bahadur Deuba government. In this, the first substantial stretch of democratic rule in Nepal (BP Koirala’s elected government was dismissed in December 1960 after a year and seven months in power), individual politicians and the parties, though inexperienced in parliamentary practice and grappling with their incompetence and the spoils of office, managed still to take the country ahead.

The success of elected village and district councils in decentralised decision-making for development could be emulated elsewhere in South Asia. Media was deregulated, and private and community FM stations transformed the way in which Nepalis keep themselves informed. The Nepali people have found a voice and confidence in 12 years, in village meetings as much as in national media, which is the bedrock of long-term democracy. Panchayat-period propaganda that the country would collapse without the king’s ‘unifying’ role in politics has been proven wrong.

An almost continuous political instability certainly played a part in the striking setbacks that plagued society and the economy in the last dozen years. Intra-party bickering, the lack of internal party democracy, the easy slide into corruption, the politicisation of the bureaucracy and the police force, the inability of the parties to arrive at consensus in times of national crisis or to face the challenge of the Maoists – all were serious failures.

Even so, and in spite of all of these failures, the last dozen years were a telescoped period of learning in which Nepal’s political parties attempted to learn the lessons that in other societies were learnt over several decades. Concurrent with these political experiences, the ability of media and the rest of civil society to watch over the public sphere grew. And with experience on their hands, the parties also showed signs that they were learning from their mistakes, and were settling down for the long haul.

But this was precisely when the Maoist insurgency moved into full swing, bringing in its wake numerous challenges that an immature democratic polity was inept at handling. As the state responded to the insurgency, the power of the army grew, and it increasingly seems less amenable to civilian direction. The palace, which had for some years taken a backseat in the country’s developments, came back as a driving force towards the end of 2002.

When he dismissed the Deuba government, King Gyanendra could have installed an entirely technocratic government or an all-party government representing in proportion all the parties in parliament. Instead, and mistakenly, he did neither. A cabinet was cobbled together so lacking in popular authority that the country and its people have been left in limbo. In reaction, the political parties, which had quietly acceded to the dismissal of the Deuba government, an action not strictly permitted by the letter of the constitution of 1990 (it is up to the prime minister to recommend any action to the crown), decided that there was ill intent in the palace’s manoeuvrings.

King Gyanendra has frequently and publicly reiterated his commitment to multiparty democracy and a constitutional monarchy, and there is every reason to believe that he is personally sincere in these statements. But that does not mean that the palace, which constitutes the monarch as well as the interests and forces of conservatism, is not averse to expanding the space it has been relegated to since the people’s movement of 1990.

In the game of perceptions, whatever his intentions and plans of bringing peace to the land before handing back power to the political parties, the king today is not viewed as playing the role of a facilitator. Rather, he is seen as a political player, and the institution, as a result, has been dragged through the complications of hands-on politics. It is possible that King Gyanendra has decided even to risk this perception in an attempt to wrestle the Maoists to the ground by taking them head on in a battle of wits. And indeed, if successful, settling the Maoist problem would bring the monarchy some public sympathy and support it has sorely needed since the massacre of June 2001.

At the time of writing, a new leadership was on the cards. The king has the chance of going back to being a true constitutional monarch and rise above the fray of day-to-day politics. The new government will have its work cut out: conclude the peace talks with the Maoists, get them to disarm, announce local and general elections.

King Gyanendra must have realised that he needs the buffer of elected politicians to be a good, facilitating king and not be tainted by the dirt of the political marketplace.

The monarchy, beyond its proper role as a neutral site for mediation and conciliation when required, could involve itself in Nepal´s social, economic and cultural spheres to the benefit of a modernising society.

The Maoists want a republic, but a combination of societal, national and international factors have sapped their momentum. The only system Nepalis know will work in the long term, for it is the only one that can develop the resilience and flexibility to respond to the needs of society and economy on an ongoing basis, is a government run by elected peoples’ representatives, regulated by an active civil society.