It is almost too late to salvage the national reputation

The country’s international reputation will face a high-profile challenge this month when the UN Human Rights Commission in Geneva debates human rights abuses in Nepal for the first time. 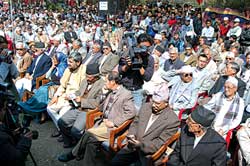 European members of the commission, worried about the army’s impunity in the counterinsurgency war, aim to put the Nepali government on the dock. The Swiss have prepared two draft resolutions: a harsh one blaming the government, and a consensual one in case the government makes moves to address the issue by then.

Foreign Minister Bhekh Bahadur Thapa is travelling to Geneva on Wednesday on a damage control mission. As a worldly-wise diplomat, Thapa knows by now how far Nepal’s image has plummeted in the past two years of conflict and half-hearted democracy. Nepal’s parliamentary crisis and the inability or unwillingness of the Royal Nepali Army to conduct a clean war will soon get a lot of international attention.

Watchdog groups say that it was the Maoists who unleashed war against an elected government nine years ago, and don’t doubt that they have practiced widespread abuse. But, they argue, the state has a bigger responsibility to protect citizens, including in times of war. The worry is that the RNA is putting the core humanitarian principles of the Geneva Conventions on hold in the hope that things will go back to ‘normal’ once rebels are defeated.

It has now gone beyond how all this will affect our tourism industry. Nepal’s reputation is already sullied as the country joins the list of other human rights hotspots. The Guardian last moth listed “some of the most dangerous and repressive regimes of the world”: Colombia, Zimbabwe, Uganda, Indonesia, the Philippines, Israel and Nepal.

“The government must have got the message, but I fear the officials and the generals still don’t realise the extent of international indignation that is building up,” said one senior donor agency official on a recent fact-finding visit to Kathmandu.

Alarm bells are ringing loudly: Amnesty International issued notices on illegal detentions and disappearances, and United Nations Special Rapporteurs on arbitrary detention, torture, and on extra judicial, summary and arbitrary executions have intervened. Human Rights Watch, has begun to monitor Nepal. Mainstream watchdogs like the International Crisis Group are stepping up the pressure, and even the US State Department’s human rights report this year points to abuse by the army.

The United Nations Human Rights Commissioner has asked for a full and independent enquiry into RNA excesses. Knowing where the buck stops in the kingdom, the International Commission of Jurists has written a letter to King Gyanendra, and now the UN Secretary General Kofi Annan is similarly engaged.

If the government and military do not move quickly to assure the international community that they are serious about controlling abuse, Nepal may soon find foreign aid drying up and its role in UN peacekeeping jeopardised. The country is beginning to emit an odour as reports of torture, extra-judicial killings and secret and illegal detentions add up, and could end up being treated as a pariah state. As evidence of human rights abuse by the security forces piles up, and with only token punishment against those found guilty, the label bepatta parieka has now entered the Nepali lexicon, as desaparecidos did in Latin America.

There is consternation among some generals about being given the impossible task of subduing rebels in the most insurgent-friendly terrain in the world all by itself. Indeed, the soldiers are being asked to fight in a political vacuum, which has given the rebels strength far beyond their numbers. A force with feudocratic history has not been able to fight clean, nor manage its image. When challenged, the response of the most senior brass is: “There is a war on.” Those who raise their voices within Nepal against impunity are denounced for lowering the morale of the security forces.

As the Geneva hearings approach, the RNA appears to have got the message. Army spokesman, Col Deepak Gurung told the press Thursday that the major implicated in the Doramba massacre in August is in custody, and the army’s investigations had shown that some of the Maoists were killed in the encounter while others died after being captured. He said the army has started court martial proceedings against those involved.

In response to demands that the army sign the NHRC’s draft Human Rights Accord, the government has drawn up a unilateral code of conduct, called a ‘commitment document’. But those privy to its content say it is a watered down version of the NHRC’s draft, lacks provisions for investigating abuse by the security forces, and is selective in its reference to Nepal’s international treaty commitments.

The head-in-sand attitude on impunity and abuse is tarnishing Nepal’s reputation and will ultimately come back to haunt the country. All eyes are on King Gyanendra who, as Supreme Commander-in-Chief of the RNA, has the power and responsibility to look out for the public good.

Suddenly, there is a lot of talk of elections. The government, under pressure from donors about the parliamentary crisis, is nervous about the donor group meeting in April. Suddenly, party factions are rushing to reunite. Kamal Thapa, who got the all-important Home Ministry portfolio last week, even specified dates. He told the BBC Nepali Service on Wednesday: “We are aiming at October-December so that we can get the security situation under control.” That may be wishful thinking, given the escalation in Maoist violence and disruptions. There is speculation that King Gyanendra may announce polls at his Pokhara rally on 28 March. The parties say polls are a “ploy”. On Thursday, the five-party alliance held a mock joint session of parliament (right) in which speakers delivered anti-monarchy tirades.