At Himal magazine, we ran a film festival for three days and rejoiced for weeks afterwards. The audience’s warm embrace of a festival of documentary films was so meaningful that we are energised even in the editing of this magazine. The cover features of this issue are all spinoffs from Film Himalaya 1994. 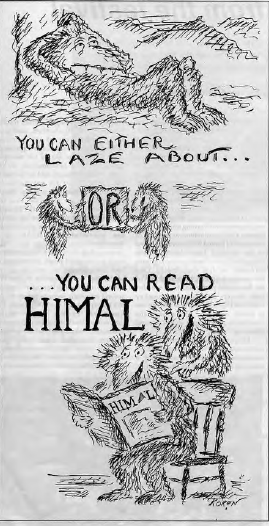 Himal welcomes Anmole Prasad, lawyer and poet of Kalimpong, into Himal’s masthead as Consulting Editor. While Anmole was earlier a stay wire to Himal’s superstructure, he now becomes part of the foundation. He joins our babu from Delhi, Sanjeev Prakash. And we thank our friend Ed Koren of The New Yorker for the fuzzy creatures he has gifted Himal (see adjacent).

Another paatra of our appreciation is Calfornian John Baccaglini of Barbara Bella & Associates, who believes that the North American readers must have access to Himal. If you have noticed improvements in the punctuality of this magazine and its print quality, you have to thank John’s nudgings-hy-facsimile.

When Himal began publishing seven years ago, we knew that this was one magazine that would not be an immediate best-seller. Our forte is in presenting issues rather than news of the day, the greys rather than the blacks and whites. Our gain in readership has therefore been tortuously slow.

In trying to reach the South Asian market without an advertising budget, nor any viable network to bank upon, Pema Wangchuk Dorjee has a task that is the marketing equivalent of doing the Kangshung Face, solo. But all of us here have understood well Himal’s First Law of Market Penetration, which runs: “Survival is the best marketing strategy.”

We could still use more advertisers, though, as long as you do not brew beer, peddle cigarettes, or operate casinos.