We have become hardened and automated when confronting death. Madhav Ghimire would have been able to contextualise. 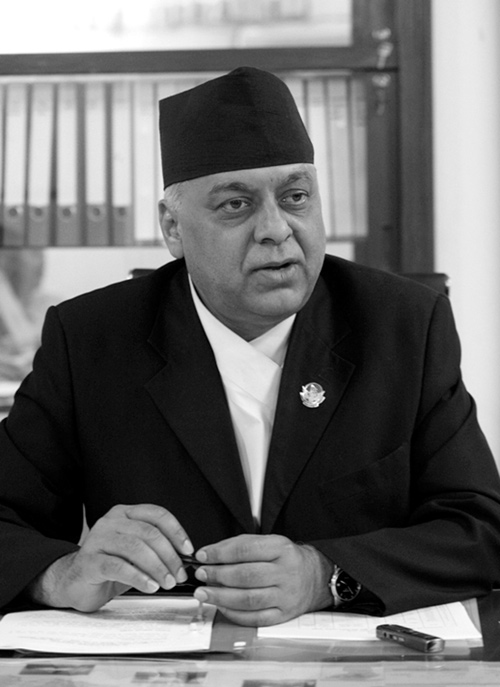 On social media, it comes very easily for people to write ‘RIP’ as throwaway acronym when a post is put up of someone’s death. It is a slight to the departed, this perfunctory ritual finished in all of three letters banged on the keyboard.

Perhaps this heartlessness in the face of dying is the result of the years of conflict, coupled with the ultra-progressive justification of political violence. Far from being philosophically karmic in countenancing death, our living instincts have become dulled and distorted.

You can see this happening in how on occasion parents themselves seem programmed in their response to the demise of, say, a child in an accident or in a hospital emergency room — they are immediately on the street demanding compensation. The smart phone close-ups of near-and-dear ones on the funeral pyre as the flames begin to eat, the degrading treatment of coffins bearing migrant workers who have died in the Gulf or Malaysia at TIA baggage collection…

This new, automated reaction to death may answer one question that has refused to go away from my mind these past four months: why we have failed to mark the passing of Madhav Ghimire four  months ago, to mourn the departure of the extraordinary civil servant who also served simultaneously as Home and Foreign Minister in 2013-14.

A well-liked bureaucrat who rose to be Chief Secretary (2009-12), an expert in development, foreign aid and local government, with deep knowledge of national security matters, Ghimire made a mark as the point government official on the peace process.

Ghimire was chosen to be Foreign/Home Minister in the Khil Raj Regmi interim government. Though many, including this writer, were against the formation of that government for going against constitutional and democratic norms, it was due to Minister Ghimire’s diligence in organising elections that we came around in support. With some exceptions, the 2013 polls were free and fair and the credit goes mainly to Madhav Ghimire.

He was an un-ostentatious public figure who did not change his old cell phone even as he became minister. That phone hardly rang, because he worked through the institutions; and there was no crowd of hangers-on in front of his official residence when we went to meet him several times on urgent election and human rights matters. He was genuinely concerned about saving the lives of Nanda Prasad and Gangamaya Adhikari. 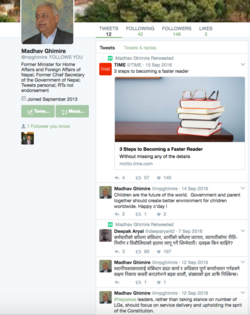 As I sat down to write this article, I was surprised to find Madhav Ghimire’s Twitter handle is not suspended yet (picture right). It is with great poignancy that one notes his latest interests were all centred on the state of governance and the people’s distress. In the first half of September, he was writing that political leaders, ‘rather than taking stance on number of (local government) units, should focus on service delivery and upholding the spirit of the Constitution’. And in another tweet: ‘only viable local government units make federalism viable altogether’; or ‘political leaders must stop double-standards in the conduct of foreign relations, whether they are in government or outside’.

Ghimire’s last approving retweet is of a post by researcher/archivist Deepak Aryal, who wrote in Nepali: ‘Why do we need political parties when bureaucrats manage the Constitution, the Army does business, businessmen make policy, and middlemen implement it?’

While most tweet on public affairs with of frustration and disgust, Ghimire’s positioning was based on a mix of idealism and pragmatism. His concerns were governance, representation and political stability in a country whose political, geopolitical and administrative innards he knew better than most others. He had the experience, exposure and credibility to ensure a ‘safe landing’ for Nepal, and did his bit to provide administrative and political continuity.

Ghimire was driving on Prithvi Highway on 25 September afternoon, returning with his family after a saraddha ceremony for his late father at Muktinath. At a point where the highway siding had collapsed two weeks previously when a truck went over, his jeep flew off the highway into the Trisuli. His elderly mother, two brothers and a nephew died. Ghimire’s body has not been recovered.

The media (as well as social media) did not immediately go into ‘obituary mode’ because for days there was still the lingering hope that he was alive, somewhere. But as the days passed, death became a certainty.

It is tragically intriguing, that someone so important to the national polity has gone permanently with so little mention. It seems our minds are so collectively hardened, our hearts turned to rock, that we cannot even muster the imagination to remember the man that was Madhav Ghimire.

He was a thoughtful person, and one who would have competently analysed this sociological phenomenon – this new and scary reaction (or lack thereof) to death and where it intersects with the state of the polity.

Madhav Ghimire was one who I could have gone to in my search for explanation of this phenomenon. But he himself is no more.