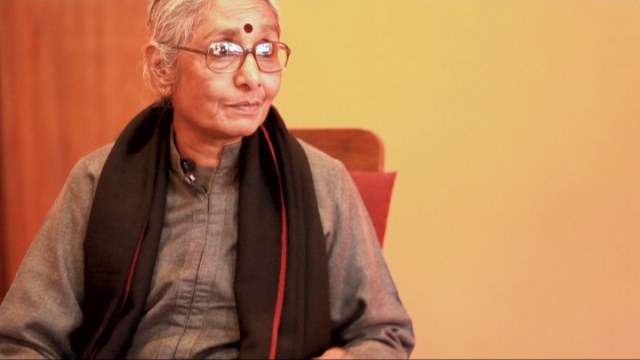 Kanak Dixit: We have with us Aruna Roy, from Devdungri village in Rajasthan, who has been able to take the Right to Information (RTI) from janasunuwais, or public hearings at the village level, all the way to national legislation that encompasses all of India. It is a movement that is truly global in scale.

Aruna, a question that has been troubling me is that there seems to be progress towards the death of activism. Sometimes because of the whole format of funding, rather than doing something from the heart. Sometimes there can be party affiliations. Development activities have become more a career than a calling. There seems to be an ongoing weakening of activism. How would you respond to that?

Aruna Roy: Well, I know only India very well, and I can’t speak for the rest of the countries. I think there was a lot of confusion in the early 70s when people of my generation began working for issues of poverty, hunger, fighting against injustice at various levels. We didn’t quite realise the impact of funding on one’s actions, particularly if one worked for political action. It was at that time that I really started looking at India’s history. In the growth of the national movement, actually we did have a Gandhi who refused to take office. He did opt out of traditional political structures, but kept what, for want of a better word, I like to call conscious politics, in which you define your ideology and your commitment and your principles, and you speak up for it regardless. You are in the political domain but don’t form part of a party political process. I think that strong process continues to survive in India, despite the fact that all the things you mentioned are happening. It is surviving, and there are many of us now who for the freedom and for the sheer pleasure of being able to say what one thinks is right, will not want to be in any one of these other paradigms. But of course there are other historical reasons why things might be up or down at a particular point of time, but I do think in India things are better. In fact, I would say that in today’s India there is greater clarity, especially in the last two decades, that if you take funding, then your capacities are limited. Because if you want to work within a funding system, even with integrity, then you have to get project funding, reports, you have to do accounts, and you can’t follow the logic of the people to its end. You have to follow the logic of the funding.

Tell us about how the Mazdoor Kisan Shakti Sangathan (MKSS) fits into the paradigm of political activism that you are promoting.
When we began MKSS, it was decided what not to do. There was very little to decide on what it would do. And I think there my feminist being – I can’t call it a background –and the emphasis on organic processes of participatory leadership and participatory decision-making, on the collective being more important than an individual, had a strong hold on Shankar Singh and Nikhil Dey. They are the colleagues who went with me to Devdungri, they also believed in this. When we began working, we didn’t want to define the nature of this struggle – or the movement or the campaign – without people. So the first three years we just participated in a number of campaigns with people on land, on minimum wages, things which they defined as priorities. Through these struggles the need for an organisation logically emerged. There were more than five dozen meetings held in one year where we debated on the structure, the composition, the decision-making process. And the MKSS then located itself as a political organisation, because we then defined politics not just within the political process of electioneering and parties, but outside of it as fighting within the framework of constitutional rights, and positioning ourselves with the poor, for the poor, the marginalised, the disenfranchised, the minorities, the Dalits, the women.

So what makes MKSS political?
The political is in how you see an issue. The same issue can be seen in ten different ways. RTI, for instance, can be just a seminar done by academics, it can be a workshop done by people funded to spread the word, spread awareness about RTI. It can be the struggle of an individual fighting for his or her rights with the state, with a government office. It can be a poor person fighting the denial of rights, the denial of life and liberty. It can be the fight of a large collective on issues. So we would then not be party to the first couple mentioned but we would be part of the latter bit, where RTI would be seen as part of a democratic struggle, to see that there was both no arbitrary use of power and no corruption, that the system delivers as per its obligation to the people. So it becomes a political act.

And that requires organising. That is also what makes it political – that it is a group, acting for a goal, even if it is not through a party.
Even an individual, independently working, must understand that it is not just merely settling of a corruption issue, but by asking those questions they actually ask questions of the state or the government which have larger implications.

Why did you settle on RTI as your entry point?
The thing is that it has evolved. That is why I made that first statement about feminism, because a movement has to evolve from a group process and thought, it can’t just come from anywhere. Many of us felt that secrecy was terrible – we have something called the Official Secrets Act in India, Pakistan, Bangladesh and Sri Lanka, wherever the British ruled. They’ve left that great gift to us, the Official Secrets Act. So every time you asked for information from the government you came up against this block. So we were all aware that that Act needed to be set aside in order for more transparency. In fact the VP Singh government had tried to enact a RTI law. So there is a history.