No, Megan, no! Uh-oh, Kirsten! (I am addressing model Megan Fox and actress Kirsten Dunst, see pics.)  That is not the way to pose for a photograph in our rapidly economically globalising world! These particular photos were splashed in the 9 June and 15 June ‘People’ page of the Kathmandu Post. I have no doubt that print media in large parts of the world would likewise have used these images to spice up stories about the boyfriend troubles, acting assignments, etc of the two ladies. 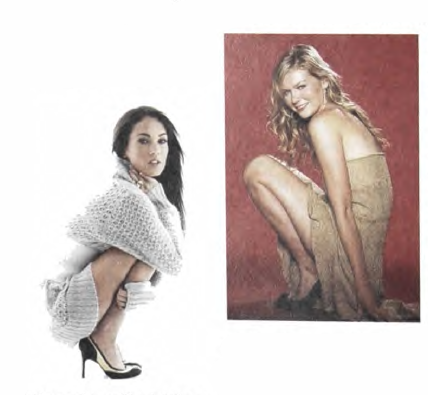 Many of Megan’s and Kirsten’s compatriots in the Western glamour world of film, video, music and fashion do pose similarly, in what you would call the squat position. Design and layout people are quite keen on this posture because it provides a square frame within which to display a lady, making it possible to show the legs, torso and upper limbs without always having to show the full stand-up length. But what may be very good for the page designer may no longer be good for the audience, or the star/starlet seeking attention by exhibiting her capacity to knee-bend. The world of glamour consumption is changing, after all, with a huge demographic category joining in that represents two-thirds of the world, at least. I refer to the consuming classes of India and China, which the fashion-linked multinationals seek to reach.

You, Megan and Kirsten, may not know why this pose is problematic. You have grown up in the Occident and did not have missionary parents who worked in the hinterland of East Asia, Southasia or Africa. You should be aware that pictures such as these are no longer grist only for the Western tabloids. Editors from Guangzhou to Bangalore – and Kathmandu – will print these images. And these editors may themselves not be sufficiently alert to the challenging body position. But, believe me, they will before much water has flowed.

As the markets in Southasia/India and China become targets for Western products and services, from executive jets to Beaujolais wine, one can expect a turnaround on the glamour photography front. For now, the West holds such charm for Asia’s elite masses that it will be actor Bruce Willis sporting Brietling timepieces, and Sean Connery sporting Louis Vuitton for some time to come. As yet, the market is not large enough for differentiated advertising, and a one-size-fits-all use of celebrities is still the norm when it comes to globalised campaigns. At best, a completely ‘European’ face of Aishwarya Rai can represent a line of cosmetics; otherwise, cricketers and soccer stars are only targeted at niche national audiences.

As the market expands and deepens, the celebrities of Europe and North America will be found less and less in Asia. And it will not only be the celebrities that the media managers and advertising agencies will have to study in order to discover what is acceptable worldwide – they will look at other aspects, as well. For example, is there a huge market being lost by pushing the ‘fairness cream’ formula? A calculation might show that there are tens of millions of women in Southasia who do not want to change from beautiful brown to take on a deathlike pallor. Multinationals that have earned multiple crores trying to whiten brown skin might just do a course correction.

For now, Bollywood defines the ideal woman according to Hollywood measurements, proportions and skin tone, and this impacts all of the Subcontinent right down to the upazilla, where skinny models and lily-white actresses become the paradigm. But there will come a day when Tamil cinema will define what is chic. At that time, the ad agencies and image-makers as we know them will be in full retreat, and chubby will be in – even for ‘item numbers’ in celluloid blockbusters.

I declare that there will soon be a reverse flow in what is considered attractive, from Southasia to the West. And it will be subtle and minimalist. Just as the nose-ring caught on and moved on to the belly ring and eyebrow ring, so will the beauty spot on the chin, that spot of kajol, come into its own beyond subcontinental shores. Before long, it will be the luxuriance of long, braided tresses dripping with coconut oil and rounded off with red ribbons that will catch the eye of the haute couture moguls by the Seine.

As Southasia continues to take over the world, the fashion photographers who love to show bare backs from the neck right down to Antarctica will soon go minimalist, too. What is left unseen, what is brown, what is presented discreetly, will probably be the call of the future. They will find the true aesthetic in the back of the lady showing nothing but bands of skin across the waist and the shoulder, the rest hidden by stretches of the sari pallu and blouse. The smartness of the nattily worn salwaar kameez will finally dawn on the world, the swish of a dupatta will take Cannes by storm. And Cannes, of course, will be moving to Lucknow.

As we evolve out of the era of skin and more skin, celebrity photographers and publicists in New York and Paris will realise that certain postures work also in Southasia, and certain body positions do not. They will themselves do research to understand why.