Hima is a 92-year-old émigré from Awadh, whose father is a talukdar who stayed back. She moved with her husband to Lahore after Partition, while the aging father lives on in what has now become India. As a former nobleman, he represents the best of Lakhnauvi civility and grace (tehzeeb), civilisational values that the modern-day power elites of Lahore, Karachi, Delhi or Bombay have yet to incorporate. 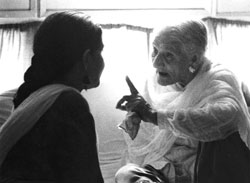 In The Life and Times of a Lady from Awadh: Hima, filmmaker Shireen Pasha has weaved a beautifully complex tapestry of a lifestyle that is now largely evaporated. Her documentary presents old-world Awadh through the medium of across-the-LoC letters between a father and daughter. Additional flavour is added through enactment of short plays written by the elderly talukdar, a sharp observer of human foibles and refreshingly advanced on social matters, including women’s emancipation.

Hima is about as Southasian as a documentary film can get, traversing the horizontal plane of distance across the modern-day frontier of Pakistan-India and the vertical plane of time-reaching back to Awadh, a term that fairly drips with the syrup of history. It is a different matter that ‘Awadh’ has simply disappeared from the nomenclature of modern-day India and Southasia. The former kingdom has been embedded within Uttar Pradesh, a province (‘the northern region’!) as lacking in personality as Awadh was full of it. Meanwhile, Lucknow-on-Gomti is a shrivelled form of its old self, trying too hard to hold on to some strands of its legendary tehzeeb.

Shireen Pasha’s success is the presentation of the father-daughter correspondence as a prism into a bygone era. She utilises the particular power of non-fiction film to evoke empathy and understanding. We see here how a competently made documentary, dealing with real life players, can be more powerful than all the manipulations of feature film, even the great Satyajit’s Satranj ke Khiladi on the decline of Awadh.

Hima is only one of the 43 competently made non-fiction films being screened at the Film South Asia ’05 festival of documentaries being organised at a spanking new duplex cinema in Kathmandu from 29 September to 2 October. These films highlight the coming together of commitment and craft in the evolving genre of Southasian non-fiction film and the variety is astounding. (festival site: www.himalassociation.org/fsa)

Among the 43 productions, a team from Birganj in the Nepal tarai visits Sonpur in Bihar for an annual soccer match. To some, this may seem like a trip from nowhere to nowhere but director Girish Giri brings alive the humanity of the deep, neglected, populated heartland of Southasia. Shaheen Dill-Riaz flies back from Germany with camera in hand to understand whether Bangladeshis are indeed “the happiest people in the world” as suggested by a London School of Economics study. M Khan and K Negi present an India-Pakistan production on a cricket tour titled My Brother My Enemy. And in Sunset Bollywood, Sudanand and Yugesh Walia follow the lives of Bollywood stars who have receded into oblivion. Remember Kumar Gaurav?

The trick with documentaries is not only to make them well but to be able to exhibit them, which is why we need a revolution in screening. Television channels all over the region must get wise to the fact that documentaries like Hima can provide great infotainment (even at its unusual length of 135 min). Meanwhile, it would be a good idea for Film South Asia to take Hima to Lucknow for a special showing, inviting Shireen Pasha from Lahore, the former seat of raja Ranjit Singh, to the capital that Wajid Ali Shah vacated. There will be historical justice in there somewhere.