Just when one thought one knew a little bit about everything, one realises there are some things one knows nothing at all about. Recently, one such revelation caught up with me on a visit to Inle Lake in central Burma, where I discovered the use of the thigh and calf muscles for propelling a boat. 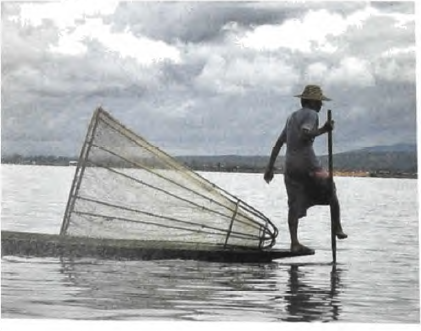 Boats can run either on moving or still water. Going downstream, the river pushes the dugout along. Going upriver, if the flow is not too strong you make use of the barge pole, usually made of bamboo. The most typical method on still water is, of course, the use of paddles, either one implement that is transferred from side to side to keep the boat on an even keel, or, with a rowboat, with oars on either side.
One might have wondered, though one never did, why there was no attempt to use the larger muscles of the lower body in propelling a vessel on water. The reliance on hands and arms is, as it turns out, not totally universal. The Intha boat people of Inle Lake use the leg and calf muscles.
I had not done any prior research before departing Rangoon and arriving by air at Heho airport for the one-hour drive to Inle. Arriving on the banks of the lake in early evening, at first I could not quite make out what I was seeing. A low-riding canoe was passing by in the fading light, with the figure of a man in lungi doing awkward-seeming calisthenics at the back. After a closer look, it was clear I was witnessing a unique method of boat propulsion through human muscle power.
The oar has a longish handle. The man stands tall on one leg and wraps the thigh and calf of the other tightly around the handle. He pushes forward, bringing his torso to a nearly horizontal position, kicking backward, all the while holding the top of the shaft tightly with the hand.
This is how an innovation seems to have evolved in the eastern hinterland of the Bay of Bengal, to use muscles other than the arms to push a boat forward. An added advantage of this means of movement, besides bringing the stronger leg muscles to bear, is that one hand remains free for other activities, especially setting nets in the water. The oar also works simultaneously as a rudder.
It is not necessary, of course, for everyone to be excited about a personal discovery of a method of doing something. My own interest was aroused, besides the humility that came from not having known anything about this way of generating thrust in water, because the Inle Method represents the myriad ways in which humans have adapted to their environment. What was it that was so peculiar to this 45-square miles expanse of water within the folds of the Shan mountains of central Burma, that this system developed here and, equally, that it remained an isolated phenomenon?
The other point to remember is that, with the arrival of modern means, the leg-paddle boat people will rapidly disappear from the scene. In the hills of Nepal, the age-old method of carrying goods in wickerwork baskets using the back muscles and tumpline, which goes across the forehead, is fast disappearing wherever the internal combustion engine has arrived. In Burma, its population politically isolated and economically marginalised, this style of moving a boat clearly survived due to remoteness from the market in a tormented economy. But that too will change.
Just as the little sailboats have disappeared from the Bangladesh delta (see last month’s On the Way Up), the leg-paddlers too will disappear from Inle Lake, and that will mean one of the evolved human heritage, a cultural artefact, will be no more. Humanity will be poorer, but what will happen, will happen.
Already, Inle Lake is full of the raucous clamour of hundreds of locally produced needle-shaped, gasoline-powered speedboats that rush hither and yon, transporting locals, tourists, goods and produce to market. The boat men concentrate on laying their nets, propelling themselves amidst the turbulent wake of the careening speedboats.
I do not want the boat people of Inle Lake trapped in the ways of the past just because it is quaint. The leg-paddle method their ancestors developed over the course of centuries is obviously a response to the particular economy and environment of Inle Lake. Once this method of propulsion is no longer required, it will die. For those who would like to see it happen in real time, in situ, rather than in film or in a museum, it is probably time to visit Inle Lake.