A four-day trek can take you right below Machapuchre

Many who have studied the Machapuchre massif will have wanted to get up close. Why should it not be possible to head straight up from the Pokhara Valley? What lies beyond the tree line? We headed up the ridge on a brief tented adventure over Dasain to find out. 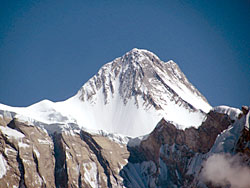 In many parts of Nepal, trekking trails are being replaced by roads. The Annapurna circuit now has a highway up the Kali Gandaki and another is snaking up the Marsyangdi. The Trekking Agencies Association of Nepal and the Annapurna Conservation Area Trust have teamed up, with Swiss support, to keep tourists engaged in the region by introducing the ‘Machapuchre Model Trek’.

Decades ago, this area was termed ‘the other (Annapurna) sanctuary’ by Col. Jimmy Roberts, rightly known as the ‘father of trekking’. The trail was already active when it lapsed during the conflict, but is now open again.

The Machapuchre trail holds great promise, for the proximity to the Himalayan giants it provides, plus the flora, fauna and the views across the midhills of Nepal. But to take direct aim at a Himalayan peak, one has to be prepared for a steep and continuous ascent. Starting on the Mardi riverside at 1120m, passing the only village of Ribhan, you make your first camp close to the hilltop viewpoint of Odane (2513m). The second camp is on the kharka (alp) above the tree line at Khumai (3245m). From there, a day trip takes you up to Korchon (3682m).

Northwards lie the ramparts of Annapurna Himal, familiar and up close. To the left, Annapurna South blocks the summit ridge, to the right lie Annapurna II (top), III and Lamjung Himal, and Gorkha Himal is further on beyond the Marsyangdi. But centre-stage is monopolised by Machapuchre (6997m), with the trekking peak of Mardi Himal (4120m) looking rather diminutive to the left.

Wherever you are, you are on a direct line-of-sight heading from Pokhara to Machapuchre. The mountain does
not oblige you by changing shape and exposing its fish-tail, it only comes closer while remaining aloof and
imperious.

Looking downhill, a good part of Nepal is laid out. The sculpted natural terraces so distinctive of Pokhara Valley march all the way up the Seti River, past Kharpani village and provide proof of the ancient catastrophic landslide flood that created the flats of Pokhara Valley.

Pokhara is forever visible, but lower by the day. Dorniers and Twin Otters are like buzzing gnats as they bank over Naudanda and head for Jomsom. Far to the south, the distinctive twin summits of Bandipur are clearly visible, as is Devchuli standing guard over Nawalparasi. Along the way, we passed numerous households boarded up, and farmed terraces going back to jungle–a pointer to the transforming economy and demography.

Early autumn had both jangal and kharka full of flowers, and the leeches were well-behaved. Half-feral buffalos looked at us with wild-eyed panic before bounding off. This is one of the best places in the world for bird watchers, and the flank known as Pipar was identified by Col. Roberts and Pokhara’s redoubtable Jhalak Thapa as a pheasant sanctuary with six resident species.

It can be disheartening to see buffalos romping about in what was supposed to be a wild trek. But this reminds the trekker that the Himalaya is an inhabited mountain chain. And as you congratulate yourself on great physical achievement, nonchalant herders whistle their way upwards, with nothing but a quilt in their baskets to ward off the freezing night.

We were doubly intrigued to encounter a Bahun sheep herder at this altitude. He had quit college in Pokhara and taken up this profitable but arduous profession once his father died. In his words echoed the fears and desires of the Nepali people at large. He had been to the Gulf once, but had barely scraped by. Though he was thinking of taking up a job in Libya, he was torn by the idea of leaving “these mountains”.

What was a Bahun herder doing up here in what is supposed to be a Gurung/Tamu region? Was the downward movement of affluent Gurungs being mirrored by Bahuns moving up the mountain?

In four nights, we had experienced the thrill of breathing the High Himalayan air, taking in mountainous wonders and the birds and flowers. But we were never far from human concerns, and seeing Nepal spread out below we were forced to ruminate-yes, just like the buffalos.