PESHAWAR, 16 November: We hopped into the sky-blue Volkswagen Beetle on 4 November in Kathmandu, being seen off by Nepal President Ram Baran Yadav, and have now arrived here in the capital of Khyber Pakhtunkhwah. We have completed all of 1100 miles for the sake of regional connectivity and spinal-injury awareness, and to raise funds to support victims of spinal injuries in Nepal. 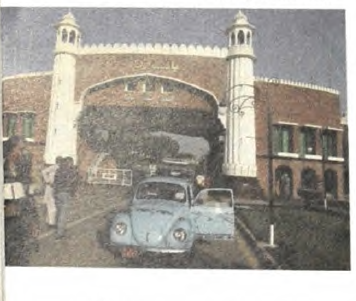 The self-consciously titled ‘Great Nepal-India-Pakistan Spinal Beetle Drive’ took the 1973 model ‘Spinal Beetle’ from Kathmandu through Lucknow, Agra, Delhi, Amritsar, Lahore, Islamabad and Rawalpindi. As we switched off the ignition we told those who had gathered to welcome us in Peshawar: ‘It was an exhilarating journey across the friendly landmass of Southasia, and perhaps a pointer towards easy land-crossings for people from all our countries. If an old Beetle can do with ease, what are we waiting for?’

Most of our journey was along the ancient route that became the Grand Trunk Road, regularised by Sher Shah Suri during the 16th century. This context gave rise to another quote: ‘The 21st century demands that we open this highway for people, commerce and ideas to flow. Land connectivity is important because airline links cannot provide the mass-level contact that our people and economies deserve. We should build the same cacophony at the Atari-Wagah frontier as at the Nepal-India border of Bhairahawa-Sunauli.’

Among the many interesting aspects of the road trip, from the geographical to the emotional and historical, I would include the following:

So, did the journey raise the necessary money? Unfortunately, only about half of the USD 110,000 we had targeted at the ‘rate’ of USD 100 per mile. We now plan to raise the full amount through a ‘retroactive campaign’ that will end with the 10th anniversary of the Spinal Centre – Nepal in April 2012. Do tell someone you know!