Queen is fine entertainment, about a New Delhi girl in Paris and Amsterdam.

Feeling rather inadequate for having only heard of Kangana Ranaut and never seen a film of her’s, word of mouth got me to the cinema to see the unimaginatively titled Queen, directed by Vikas Bahl. The 146 minutes of running time were spent in delightful diversion. The film is nuanced and nearly flawless. 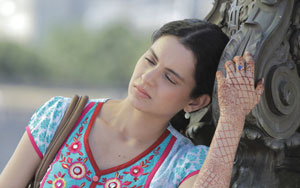 Populated by Partition refugees from Punjab, Rajouri Garden used to be a New Delhi satellite and is today fully part of the city. This is the home of Rani’s family, a middle class livelihood marked by auto-rickshaws and ‘kitty parties’ made possible from the earnings of a mithai shop.

Starting with the courtship with Ravi played by Rajkumar Rao, Ranaut plays with consistency the role of the simple lass yet to ‘come of age’. When Ravi asks about the sweetmeats as a means of striking up conversation, she starts off by diligently describing how each confection is made. In the end she does fall for the persistent boy and the wedding is fixed.

The opening credits start with the pre-nuptial celebrations. Things happen, and Rani ends up utilising the honeymoon ticket all by herself. The script (by Bahl) really gets going as Rani heads for Paris and Amsterdam, although at this point the director shows three different aircraft types for one flight.

Unlike the standard Bollywood use of European locales to peddle exotica and as props for song sequences, in Queen, Paris and Amsterdam are part of the story. Bahl clearly knows how these cities function, their cultural fabric, going beyond the tourist spots to locate the pensiones, hostels, eateries, railway platforms, canals and out-of-the-way streetscapes.

Rani’s engagement with these cities and their inhabitants is perfectly pitched, from the attempts to cross a street to her fascination with the ‘lip-to-lip kiss’. In Ranaut, we have an actress with the confidence to allow close-up frames that show up facial blemishes, or to let someone else look more flamboyant, as happens with the stately Lisa Haydon, who becomes Rani’s Franco-Indian buddy.

Deadpan conscientiousness, if there is such an expression, marks of Rani’s character, as when Ranaut recites to a disinterested Dutchman the various names in different parts of India for the concoction panipuri. In one scene, an Italian chef is aghast when Rani dumps spices on his creations, and the episode in the Amsterdam sex shop is best left for the reader to experience in the hall.

The film is full of thoughtful little touches that communicate well with the audience – Rani discovers that burping is one proof of feminist liberation, and practices it. Another time, she gets rowdy on a night club stage, takes off her cardigan and swings it around as if to toss it, but then stuffs it into her huge handbag.

The foreigners who populate Queen are real characters rather than oddball white folks in badly acted cameos, as tends to be the rule with Mumbai blockbusters. Here, after the Delhi family and Haydon’s character are left behind, the co-actors who hold up the film are Rani’s male hostel roommates in Amsterdam – the Jeffrey Ho (as Taka), Mish Bokyo (Olexander), and Joseph Guitobh (Tim).

Vikas Bahl’s control of the cinematic medium is deft, no spoon-feeding here. When Rani looks out of her hotel window as she arrives feeling alone in Paris, it would have been so easy to show a vista of the Seine promenade. In Amsterdam, as Rani jettisons the invitation card meant for her wedding as catharsis, the audience is not shown it frontally and has to use imagination.

The director uses the looming presence of the Eiffel Tower as a prop to harass Rani in her forlorn state, remaining in view as she seeks to escape from boulevard to street to lane. It is an obvious cinematic mechanism, and someone may have done it long before Bahl, but it works well in Queen.

The pacing is perfect, with moments of grief punctuated by episodes of great humour. There is the half-drunk Rani trying her dance moves in front of a Paris taxi-driver preoccupied with his cellphone. As Rani comes of age, her dress changes and the kurta is left behind, and a European city sophisticate returns to Rajouri Gardens. The large handbag, used as a security blanket, is nowhere to be seen.

It requires skill to carry an audience through more than two hours of film, not counting the interval interruption, that too without the regular pot-boiler formula of melodrama and song-dance routines. Together, Vikas Bahl and Kangana Ranaut succeed in delighting us throughout.