There is a trekking traffic jam this autumn in Nyeshang, as Manang is called locally. The ACAP post at Dharapani has registered an average of 300 plus daily arrivals over the last two weeks.

The lodges are so packed that guides rush ahead up the trail to reserve rooms for clients. When nothing can be managed, trekkers pitch tents on the flat roofs of private houses. Many lodges and restaurants have been rented out to Gurung folks who are reaping a bonanza.

Manang Valley is about as close as you can get to ‘Alpine’ terrain in Nepal. Above the gorge country beyond the district headquarters of Chame, the glacial valleys are wide and the views panoramic, amidst meadows leading up to pine forestsand dwarf junipers beyond. Annapurna Himal commands the western flank of the Marsyangdi Valley, while the fine and accessible ‘trekking peaks’ of Pisang, Himlung, Kangaru and many others make up the rib of the district.

It was in the 1990s that the ‘Around Annapurna’ trek started becoming popular, with visitors peaking in 2000. After that, the war took its toll and trekkers slowed to a trickle. Maoist cadres along the trail charged trekkers Rs 200 a day, and trekkers dropped to 40 a day.

The Maoist activity drove backpackers into the ‘tea-house trekking’ mode, which has proved a boon for local hoteliers. The number of trekking staff who used to benefit from carrying loads for camping groups and run kitchens is down drastically, however, and this has adversely affected employment.

Manang will see changes as the road from Besisahar is completed in the next few years as the cliffs are blasted and landslides controlled. There are worries about what this will do to tourism, but the village committees here have agreed not to allow the road to go up to Thorung La.

Rather than fret over how the road’s arrival may destroy the environment, culture and trekking, people here seem determined to adjust to it and take advantage of better access. After all, Chamonix and Zermatt did not collapse with the arrival of the motor road. 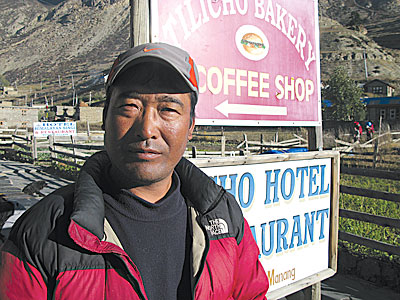 Besides Thorung La and Tilicho Lake, Manang’s attractions include the Milarepa Cave above Braga, the massive bare-rock amphitheatre of Swargadwari, the twin valleys of the Marsyangdi and Naur Khola, as well as the great views of the Annapurnas from the north. 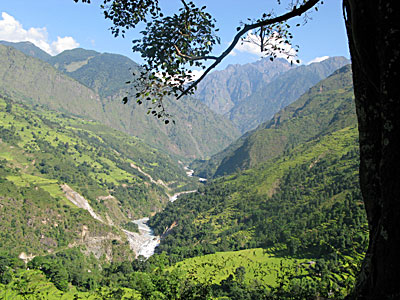 Greater access will allow trekkers to climb Manang’s midsized peaks: Himlung, Pisang, Yak and Thorung which are ideal for ‘holiday climbing’, a pastime that has not yet made its mark in a country where expedition-style and extreme-alpine-style are the standard. 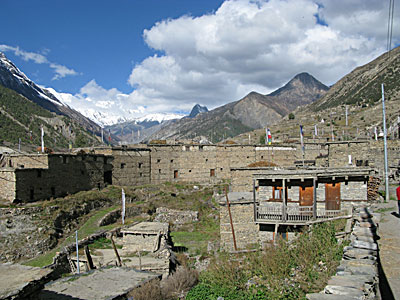 Last week, after acclimatising in Manang village, a French team with just a guide and a cook was off to Pisang West. The plan was to set up one high camp a day above the village, and make it to the summit the day after. 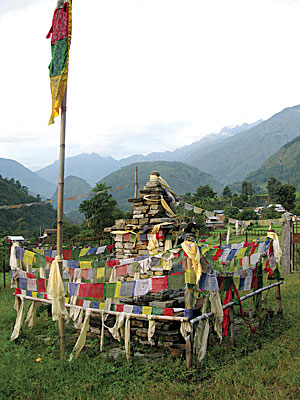 In future, whether they arrive by road from Besisahar or by air at the Hu

mde airstrip, the holiday climbers will spend a few days acclimatising on the Marsyangdi Valley with side trips to villages, glaciers, lakes, caves and ridgelines. Then they will take their pick of the mountains of Manang.

Access: Nepal Airlines and Yeti offer flights to Manang’s Humde airfield from Kathmandu and Pokhara. The alternative is to take a bus to Besisahar and start walking. After crossing Thorung La, take a jeep down to Jomsom to fly back, or walk to the road head at Beni.