August is the month of independence days in Southasia, taking in Afghanistan, Pakistan and India. Sitting here in Kathmandu, this is one celebration we are saved from. Nepal does not have such a day because it was never colonised. Some would correct that to maintain that the country was never ‘formally colonised’, that it nonetheless remained a vassal of the British in India. 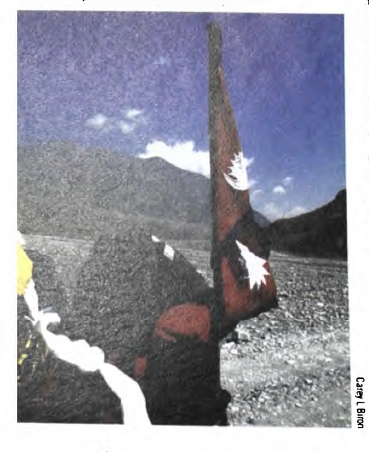 The nationalist Nepali is proud not to have a Nepali national independence day, signifying a country that not only was not colonised but also one that is the most ‘naturally historically evolved’ in the Subcontinent. After all, the unification of the country goes back to the mid-1700s, and it has remained a nation state in parallel with those of Europe, where the system began.

If anyone were to celebrate independence in relation to Nepal, incidentally, it would have to be present-day Uttarakhand/Uttaranchal. However, Kumaon and Garhwal were released from Gorkhali expansion only to be subsumed into the expanding British Empire, and so the matter of independence would have to wait a century and a half. There are also Madhesi activists of the Tarai, though, who claim that the Kathmandu state was the real coloniser – of the plains.

While the various in-country negotiations continue in these days of ‘state-restructuring’, it would be fair to say that, for now, neither the whole state of Nepal, nor the various parts of it, presently have an independence day. To begin with, this saved us a sleepless night, that of 14 August 1947 – when the world slept, waiting for the stroke of the midnight hour and the tryst with destiny. Whether India woke to life and freedom as Panditji had hoped remains open to question more than six decades later, but he did forget that the world was round and that there were people awake on the other side and in various parts. But not to nitpick…

The point is you need to be colonised if you are to achieve independence. The Kathmandu nationalist will maintain it is great to have always been sovereign, rather than paying obeisance to generations of ladies in a small island off the coast of Europe. But things are not that simple.

Nepal never got colonised, but the downside was that the society remained top-down ‘feudal’ much longer than it might have been otherwise. It failed to develop an urban middle class to pick up the challenge of governance, modernisation and economic globalisation. Neither did Nepal have, in the middle of the 20th century, a bureaucracy worth the name, or a judiciary, a postal service, a media, a railroad, etc, all of which had to be built from nothing when the Rana regime was ousted in 1950.

The liberation from the Rana regime was led by Nepali leaders who fought shoulder-to-shoulder with the Indian freedom fighters, and many tend to see the downfall of the Ranas as the Nepali equivalent of the ousting of the empire from the Subcontinent. But the similarity works only partway. Those who did not have to fight for independence in the modern era were not able to sensitise the whole society with their high political sensibility. The fighters for national liberation were forced to understand and incorporate the values of social justice, equality, inclusion and representative democracy as part of the vision of self-rule. Those comfortable within the existing sovereign status, not having to confront the colonialists with an array of modern-day values as their arsenal, often borrowed from the metropolitan societies themselves, lagged behind in nation-building.

The leaders who ousted the Ranas and brought people’s rule in 1950 were themselves individuals of the highest modern sensibility. But the entire edifice of state and civil society had not been socialised into the values they held dear. And so, when a king decided that enough was enough and decided to bring back autocratic rule in 1960, there were very few to protest. Even today, those who speak up loudly for a non-violent, parliamentary, pluralistic society are not that many.

Does all this make it sound as though I am for colonial rule? No, just trying to highlight the gaps in achieving democracy that a non-colonised society must confront and overcome. To have always been sovereign is a good thing, but it must be used to uplift society, to deliver social justice. For too long, the loud trumpeting of Nepali sovereignty by the ultra-nationalist has made us lose focus with regards to participatory democracy and development. Perhaps we can learn some deeper values from our formerly colonised neighbours, so that we can have our roti and eat it too – a country at the centre of Southasia that has always been sovereign, which utilises that exclusive status to generate economic growth and introduce equity.

Finally, I had believed, and continue to, that Afghanistan had never been colonised, that it repulsed invader after invader right down to the early 20th century. So why does it have an Independence Day?