Arriving recently at Mohandas K Gandhi’s samadhi in Rajghat, we asked the caretakers at the office for the visitor’s book from the previous day, to see what the first president of the newly established Republic of Nepal had penned. The lady proceeded to rummage through some unkempt drawers containing several bound notebooks, finally locating one which seemed like the right one. It was. 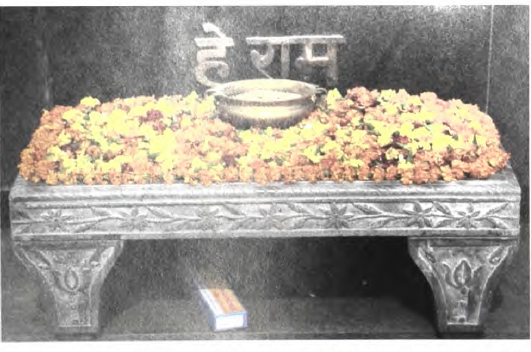 What President Ram Baran Yadav had written was obviously unprepared and impromptu, and therefore must have been from relatively close to the heart: “Gandhiji ka Quit India Movement aur freedom struggle dwara loktantrako andolanma prerana deyos.” Roughly translated, that would read, “Let Gandhiji’s efforts give [Nepalis] inspiration for the democratic movement.” Nepal is coming into some unstable times up ahead, and the president of the republic is obviously going to be put to the test in terms of the decisions he takes amidst the polarisation between the Maoists and the rest. His words before the Mahatma, spoken as a soldier of democracy, will surely serve to guide him in the days ahead.

Quickly turning back through the pages, we came across a paragraph of sanitised calligraphy, in the name of Prime Minister Sheikh Hasina Wajed of Bangladesh. It read:

Mahatma and his message of non-violence and peace remain a ever-lasting sense of inspiration for all peace loving people across the world. In the trying times, when the world is faced with myriad of challenges, specifically to peace and human security, we take refuge in the lofty ideals preached by Gandhi. I pay tribute to the memory of this great soul and the citizen of the world. 11-1-2010

A few leaves further back was the to-the-point one-liner from Jigme K Wangchuck, the young king of Bhutan: “Mahatma Gandhi’s values are timeless.”

Next was a longer but clearly self-penned note by Madhav Kumar Nepal, prime minister of Nepal, dated 19-9-2009:

I have a special feeling when I come to samadhi of Mahatma Gandhi. He is truly our apostle of peace. His message of humanity, peace and equality are universal therefore applicable to all. I get inspiration from him, as we are going through a transition in our own country Nepal.

We asked for an earlier visitor’s book, keen to see what Chairman Pushpa Kamal Dahal of the Unified Communist Party of Nepal (Maoist) might have written, in particular whether one would find a reference to the ahimsa that his co-citizens so desperately need. But the lady at the counter was already tiring of our querulous journalistic ways, and snatched the visitor’s book back.

“Hey Ram” were Gandhi’s last words, as commemorated in brass on the black marble mandap at Rajghat. Whether the Mahatma meant this as a farewell to the world, a reaching out to deity, or a ‘secular’ exclamation of pain and exhaustion, these words reach out to the visitor  at Rajghat and seek to humanise. My own reflection in paying respects to the Mahatma was on what he would have said and done about the collapse of the welfare state, the fate of decentralisation, the loss of forests, climate change, the continuation of demeaning labour, the economic rise of China and India and the escalating income divide in both of these super-states.

It would have been interesting to see what General Than Shwe, the Burmese junta leader, had written when he visited  the samadhi on the morning of 25 October 2004. For now, in terms of documentation, we have filmmaker Amar Kanwar’s sober rejection of that visit to Rajghat in his exhilaratingly manipulated video footage (see Himal cover of February 2007) titled “The Face”. There are tyrants who visit Rajghat, and diplomatic protocol requires it, but one wishes there was a way to prevent their soiled footprints from tainting this site – unless it were as penance on the way to renouncing all anti-pluralism, un-democratic and violence-prone thoughts and actions.

But thoughts of non-violence seem to be far from those of even the non-tyrants who rule over us these days. This rejections of ahimsa actually seems to be a worldwide, mass-participatory phenomenon, as evident in the tepid response to the International Day of Non-Violence, announced by the United Nations as 2 October, the birthday of the Mahatma.

But then there are those who may have been led to the wrong samadhi when they landed up on the banks of the Jamuna! Between the visit of the Bhutanese monarch and the Bangladeshi prime minister, one notices for 10-01-10 an entry by Irina Bokova, the new Bulgarian director-general of Unesco, who wrote:

With all my deep respect and admiration to the memory and legacy of Indira Ghandi, a great stateswoman, thinker and humanist who helped transform not only India but also the world.