When Harish Kapadia’s businessmen friends think he is attending a dealers’ conference in Kanpur, he may well be melting ice for tea on a pass up at 18,000 feet in Kashmir

Harish Kapadia, as his name suggests, is a kapada merchant. Sitting crosslegged in his shop, M/s Ramdas Bhagwandas, from noon till about ten at night, he sells cloth. Stacks of them, wholesale, for the calico giant Raymonds. The shop is located in the Vithalwadi locality of Bombay, the largest and oldest cloth market in Asia. 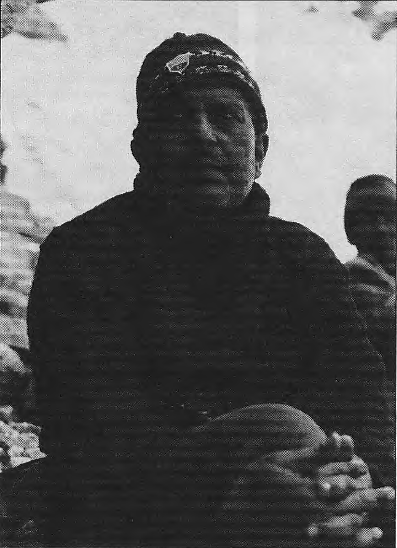 But this kapadia has another life, something his businessmen colleagues and clients would frown upon if they only knew. Harish Kapadia is India´s best-known mountain climber and adventurer, who regularly disappears from his Vithalwadi shop and Malabar Hill apartment to go exploring in the deep Himalaya. He has climbed everywhere in the Indian Himalaya from Kashmir to the Northeast, summitting hard summits in the company of some of the world´s best climbers, such as Chris Bonington, Dick Renshaw, Victor Saunders and Stephen Venables. Mr Kapadia has also almost single-handedly helped inculcate a passion for the mountains and a sense of adventure among India´s urban professionals, who today make a small but dedicated group. The Indian climbers Mr Kapadia is closest to are Muslim Contractor, Zerksis Boga and Monesh Devjani. Among Sherpas, he climbs often with Pasang Temba.

“I have always climbed in my own group of friends and do not go with national teams and so on,” says Mr Kapadia, whose expedition support staff invariably come from Harkot village in Almora which lies on the famous trail to the Pindari Glacier.

Since he started climbing 35 years ago, after undergoing training at India´s two mountaineering institutes in Darjeeling and Uttarkashi, Mr Kapadia has concentrated on interesting peaks rather than the “big names. He has climbed a total of 33 peaks so far. His main contribution to Himalayan climbing has been to explore unknown areas and to open up “climbing possibilities”, as he terms it. Some of Mr Kapadia´s major ascents have been Devtoli (6788m), Bandarpunch West (6102m), Parilungbi (6166m) and Lungser Kangri (6666m), the highest peak of the Rupshu range in Ladakh.

Not limiting himself to climbing, Mr Kapadia is also an Himalayan archivist and editor, and a custodian of Indian mountaineering lore. He edits the respected Himalayan Journal, published by the Himalayan Club, which was started by gentlemen climbers of British India back in 1928. Unlike the “official mountaineering´ promoted by government, military, police and paramilitary units, the Himalayan Club is the centre of true “amateur climbing´ in India. The mountaineers of Mr Kapadia´s strain head for the rock and ice because of love of adventure and personal achievement, rather than in response to the commandant´s bark.

Come weekends, when he is not hanging off the side of some over-exposed Himalayan rock face, Mr Kapadia and his sketch-artist spouse Geeta, two sons Sonam and Ngawang (so named to mark their father´s Sherpa associations), and friends can be found bouldering and climbing just north of Bombay´s Andheri suburb. While the beaches themselves are filthy with oil slicks and overboard garbage of oceangoing ships, the low cliffs that overlook the Arabian Sea have rocks that are firm and inviting.

Farther afield, Mr Kapadia also gets the credit for popularising the Sahyadris, a part of the Western Ghats. Years of hiking in this escarpment-rich range led Mr Kapadia to write, in 1977, a detailed handbook, Trek the Sahyadris, which has now become a standard reference for a generation of Bombay trekkers. His other books, which include Exploring the Hidden Himalaya (with Soli Mehta) and High Himalaya, Unknown Valleys, have been equally instrumental in making mountain lovers aware of little-known areas in the Himalaya.

Up Short in Siachen

In June 1996, Mr Kapadia and a team of Bombay climbers got permission from the foreign and defence ministries in New Delhi to venture up the Siachen region of Kashmir, which has been the subject of a longstanding dispute with Pakistan. After making their way up from Leh, the group was about to start up the snout of the Siachen Glacier when the army blocked its path. Mr Kapadia and his friends were asked to “vacate” the area. Civilian approval did not matter, they were told, it was the military hierarchy which must allow permission to climb in the super-sensitive border area. “Faced with many questions, heavy expenses, and puzzled at the army´s behaviour, we returned to Bombay,” recalls Mr Kapadia.

Looking back on the misadventure, Mr Kapadia is critical of the restrictions put on climbing in the Indian frontier regions. He notes that while India restricts even Indian climbers from Siachen, Pakistan has allowed more than 18 expeditions to climb in the area. “India´s neighbours are more open about allowing climbing in the border areas,” he says, and points out with some amusement that this year the Chinese gave quick clearance to an Indo-Tibetan Border Police team to climb Everest from the North, “even though the ITBP has the word ´Tibet´ in their name and as a force was raised specifically to fight the Chinese!”

Regarding Siachen, Mr Kapadia says: “The military commitment has not solved the dispute to India´s advantage, and it has caused untold misery, expense and loss of lives. It is essential that India´s national security interests are reinforced by other cost-effective means, such as allowing more Indian and foreign civilian expeditions on this range.” According to Mr Kapadia, such expeditions would help reinforce Indian claim over the area and the country´s “sovereign rights over the entire East Karakoram belt”.

But Mr Kapadia is not one to be despondent for long after a setback. In June 1974, while climbing Devtoli in the Nanda Devi Sanctuary, he dislocated his hip at 22,000 ft, and was carried for 13 days before being evacuated by helicopter. He spent two years in crutches and was ready for Sikkim by May 1976.

Despite the Siachen disappointment, Mr Kapadia is already full of plans for the coming years. As of this writing, he is off with just one companion, climber Rajesh Gadgil, to make a winter attempt of Hansbeshan Peak in Kinnaur. This coming summer, with three other friends and the Harkot porters, Mr Kapadia plans a traverse from Badrinath to Gangotri which entails crossing over a high col and negotiating the entire Gangotri glacier. This traverse has been done only once before, by Eric Shipton and Harold William Tilman in 1934. In 1998, Mr Kapadia plans to go with Chris Bonington to the East Karakoram for an attempt on the unclimbed Chong Kumdan II (7000m).

Mr Kapadia, who was recently elected Honorary Member of the UK-based The Alpine Club (one of only two Asians among 23 honorary members, and a young one at that), has plans to complete two books during 1997. One is Trek the Himalaya, on 30 new treks in the Indian Himalaya, and another the classification of all the peaks of the India, Bhutan and Nepal Himalaya, grouped in sections.

Asked about his life´s mission, Mr Kapadia replies, “Life´s mission! To see all of the Himalayan ranges with my own eyes, and to write about it all. Abode of Snow by Kenneth Mason is the bible of Himalayan history till 1953. I would like to bring the information up-to-date, but according to region, based on my own travels.”

Why are there not more Indians interested in mountaineering? “It is hard for amateurs to juggle the finances, the interest, and jobs, and so mountaineering loses out. In my own case, I have to balance my cloth business, family, writing, active climbing, and other interests like music, drama and films. But the way I see it, you have to utilise the time you have to the fullest.”

As for Siachen (Sia means “rose” and chen is “where is grows” in Balti), this cloth merchant from Bombay proposes that the mountaineers of the world together lobby India and Pakistan to withdraw their armies in order to establish there an “International Park of the Rose”.