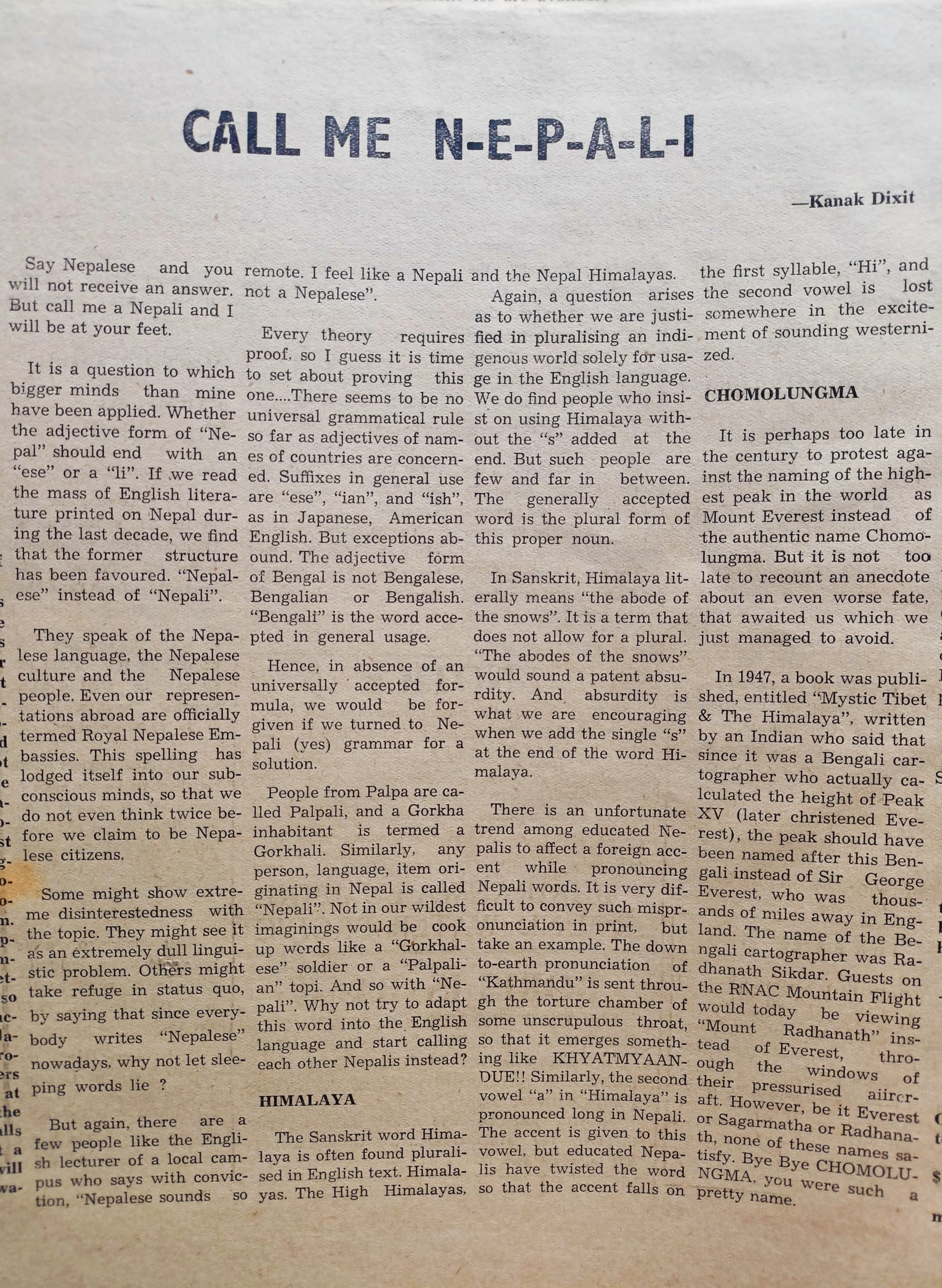 Say Nepalese and you will not receive an answer. But call me a Nepali and I will be at your feet.

It is a question to which bigger minds than mine have been applied. Whether the adjective form of “Nepal” should end with an “ese” or a “Ii”. If we read the mass of English literature printed on Nepal during the last decade, we find that the former structure has been favoured. “Nepalese” instead of “Nepali”.

They speak of the Nepalese language, the Nepalese culture and the Nepalese people. Even our representations abroad are officially termed Royal Nepalese Embassies. This spelling has lodged itself into our subconscious minds, so that we do not even think twice before we claim to be Nepalese citizens.

Some might show extreme disinterestedness with the topic. They might see it as an extremely dull linguistic problem. Others might take refuge in status quo, by saying that since everybody writes “Nepalese” nowadays. why not let sleeping words lie?

But again, there are a few people like the English lecturer of a local campus who says with conviction, “Nepalese sounds so remote. I feel like a Nepali not a Nepalese”.

Every theory requires proof so I guess it is time to set about proving this one… There seems to be no universal grammatical rule so far as adjectives of names of countries are concerned. Suffixes in general use are “ese”, “ian”, and “ish” as in Japanese, American, English. But exceptions abound. The adjective form of Bengal is not Bengalese, Bengalian or Bengalish. “Bengali” is the word accepted in general usage.

Hence, in absence of an universally accepted formula, we would be forgiven if we turned to Nepali (yes) grammar for a solution.

People from Palpa are called Palpali, and a Gorkha inhabitant is termed a Gorkhali. Similarly, any person, language, item originating in Nepal is called “Nepali”. Not in our wildest imaginings would be cook up words like a “Gorkhalese” soldier or a “Palpalian” topi. And so with “Nepali”. Why not try to adapt this word into the English language and start calling each other Nepalis instead?

The Sanskrit word Himalaya is often found pluralised in English text. Himalayas. The High Himalayas, and the Nepal Himalayas.

Again, a question arises as to whether we are justified in pluralising an indigenous world solely for usage in the English language. We do find people who insist on using Himalaya without the “s” added at the end. But such people are few and far in between. The generally accepted word is the plural form of this proper noun.

In Sanskrit, Himalaya literally means “the abode of the snows”. It is a term that does not allow for a plural. “The abodes of the snows” would sound a patent absurdity. And absurdity is what we are encouraging when we add the single “s” at the end of the word Himalaya.

There is an unfortunate trend among educated Nepalis to affect a foreign accent while pronouncing Nepali words. It is very difficult to convey such mispronunciation in print, but take an example. The down-to-earth pronunciation of “Kathmandu” is sent through the torture chamber of some unscrupulous throat, so that it emerges something like KHYATMYAANDUE!! Similarly, the second vowel “a” in “Himalaya” is pronounced long in Nepali. The accent is given to this vowel. but educated Nepalis have twisted the word so that the accent falls on the first syllable, “Hi”, and the second vowel is lost somewhere in the excitement of sounding westernized.

It is perhaps too late in the century to protest against the naming of the highest peak in the world as Mount Everest instead of the authentic name Chomolungma. But it is not too late to recount an anecdote about an even worse fate. that awaited us which we just managed to avoid.

In 1947, a book was published, entitled “Mystic Tibet & The Himalaya”. written by an Indian who said that since it was a Bengali cartographer who actually calculated the height of Peak XV (later christened Everest), the peak should have been named after this Bengali instead of Sir George Everest who was thousands of miles away in England. The name of the Bengali cartographer was Radhanath Sikdar. Guests on the RNAC Mountain Might would today be viewing “Mount Radhanath” instead of Everest, through the windows of their pressurised aircraft. However, be it Everest or Sagarmatha or Radhanath, none of these names satisfy. Bye Bye CHOMOLUNGMA. you were such a pretty name.