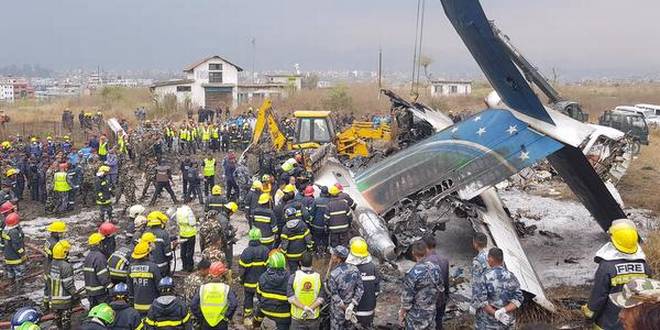 Confusion within the cockpit of the U.S.-Bangla Airline plane may have been the primary cause of Monday’s accident, which took the lives of dozens and will clearly make an impact on the tourism sector of a country that is gradually emerging from political turmoil.

The Canada-made Bombardier aircraft crashed within the perimeter of the Tribhuvan International Airport (TIA) in Kathmandu valley on Monday afternoon at 2.18 p.m. Nepal Standard Time (NST).

The weather over the valley was cloudy but calm, with winds blowing at six knots per hour from the north as the flight approached Kathmandu from Dhaka.

As the aircraft descended into the valley and approached the airport’s single north-south runway, the conversation between the Air Traffic Control and the cockpit was available as recorded on LiveATC.net. 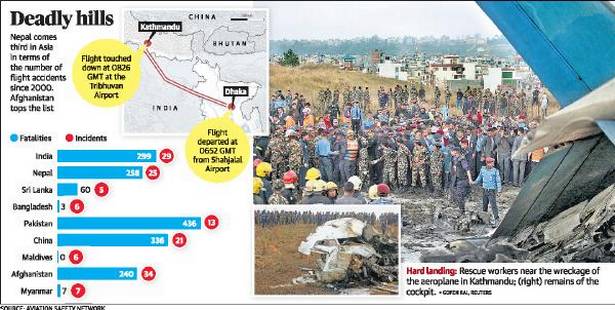 Listening in to the final four minutes of the tape indicates possible confusion in the mind of the Bombardier pilot about ‘02’ and ‘20’, the southern and northern ends of the TIA runway. The earlier part of the descent seems to have been handled by a woman pilot in the cockpit, while closer to landing, the communications were taken over by a male pilot.

There seems to already have been some concern about the latter pilot’s understanding of the approach procedures, from before the tape segment. At the very outset of the tape, the ATC is heard warning the pilot, “I say again, do not proceed towards Runway 20.”

Later, he is warned sternly to remain on hold, “but do not land” because there is another aircraft on final approach before him.

One pilot is heard telling: “You should use radar to get him out of harm’s way. The visibility in the surrounding hills is not good.”

After the Bombardier has apparently taken a ‘right orbit’, the ATC asks the pilot whether he wants to land on Runway ‘02’ or ‘20’.

The latter responds: “We would like to land on 20”, and he is cleared to land from the (northern) end. In doing so, he also misreads the wind direction given by the ATF by 10°.

The flight is asked if the runway is in sight, to which the pilot replies, “Negative”. But then immediately thereafter, he says, “Affirmative”, that he can see the runway. At that point, the pilot says: “Cleared to land Runway 02” (even though he had sought permission for 20). However, at this point ATC too clears him to land on Runway 02.

Meanwhile, while talking to an Nepal Army aircraft which is on hold about 10 km away, the ATC says that the Bangladesh aircraft is “on final for 20”.

The last recorded words of the pilot is: “[Unintelligeble] said sir, are we cleared to land?” After some silence, the clearly alarmed ATC controller shouts, “I say again, turn…!”

There is silence for a while, then a ‘Fire One Station’ calls the ATC, indicating that a crash has occurred and the airport fire tender is active. A pilot comes on to ask if the runway is closed, and the ATC confirms, “Airport is closed.”

The initial outsider’s hypothesis on the air crash was that the aircraft must have skidded off the runway upon landing, and met its fiery end. However, the aircraft had landed up somewhat down the airfield, by which time the plane would have decelerated. The state of the wreckage, on the other hand, indicated a hard crash.

That something even more untoward had happened came to light with the eyewitness report of Arnico Panday, a climate scientist with a locally based international organisation. Mr. Panday reported that he had seen the aircraft flying an angle to the runway and then make a sharp turn over the airport. The Bombardier had missed the control tower and several parked and taxiing jets and turboprops, and ploughed into earth on the eastern side of the airfield.

While a crash investigation report is awaited from the investigation commission set up by the government, it can be said from the tape archive and the eyewitness account that the Bombardier aircraft was doing an unexpected manoeuvre flying that low over the international airport.

Dhaka and Kathmandu have been connected by air since the days of East Pakistan, when DC-3 piston-engine aircraft of Pakistan International Airlines (PIA) flew the route. Three Bangladesh iairlines service this route today, Bangladesh Biman, Regent Air and U.S.-Bangla. The passengers tend to be Bangladeshi tourists, Nepali students studying in Bangladesh universities, or Nepali migrant workers headed for Malaysia or elsewhere.

Nepal’s airways are known not to be very safe, but that is mainly because of short take-off and landing (STOL), aircraft having to service precarious mountain airstrips. Kathmandu’s TIA, though a very busy airport with only one runway and a poor record of handling of passengers and cargo, is not considered a hazardous airport and is served by 30 airlines.

Back in 1992, there were two wide-body Airbus crashes in the nearby mountains, one of Thai International and another of PIA. All passengers perished in both events, and both air crashes were attributed to pilot error, added to the fact that at the time the airport did not have a radar unit. The Japanese Government gifted Nepal an approach radar at that point, and a new radar with tracking ability over most of Nepal was inaugurated over the past year.