In the depths of despair, as a self-appointed royal chairman of the cabinet tries to drag down society and the economy with the able assistance of the royal military, Nepalis need to remind themselves that the national prospects are bright. In fact, brighter than for most of the rest of Southasia. 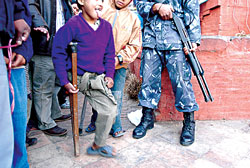 True, Nepal has to unload a lot of historical discriminatory garbage as well as the negative legacy of Chairman Gyanendra in the form of illegal and unconstitutional ordinances, decrees and orders. True, yesterday (Thursday) morning, almost the entire crop of national politicians was once again railroaded into detention. True, the massive destruction of the national spirit at the hands of the Maobadi rebellion requires a colossal recovery effort. But when royalty is shown the door and the Maoists forced to give up their brutal campaign, the country will have achieved a catharsis and the future will be ours to build. The twin rebel-royal challenge has allowed the nation to mature in a telescoped period of time and the people will be better for it as along as we land on all four feet.

Once we land thus, the underpinnigs for a successful nation-state are all there. The lack of formal colonisation delivered, in the modern era, a Kathmandu economic power elite so lacking in sophistication that it did not have the perspective to understand the atavistic nature of the royal takeover and react instinctively against the chairman’s coup d’?tat. But no matter, the advantages of non-colonisation are legion even if oft repeated. Most importantly, the fact that the British stayed away has allowed Nepal a continuous history that provides a spine of identity that other nation states of Southasia began to build only after 1947.

While many of the myriad tongues of Nepal are sadly in decline, the fact is that Nepali as the link language provides a platform for political and economic cohesion. Nepal differs from nearly every Southasian country in this sense-there is not the distinction between the English-speaking ‘creamy layer’ and the vernacular masses you find everywhere else-in Delhi, Colombo, Karachi and even Dhaka. Just to take two examples, the vibrant journalistic sphere and the loud and raucous political arena in Nepal functions entirely in the Nepali language, without English elite interference. There is not the demographic and class divide between the English and Vernacular, which spells more efficient politics, all else remaining constant.

It is because all else has not been constant that political stability and economic advance has been denied the Nepali people even though their nation-state is capable. There are enough examples to show that Nepal can make democracy work for the people if there is indeed that stability and the presence of an alert civil society to watchdog and back up the politicians. Nepal’s successful experiments in local government, community/public radio and community forestry, just to take some recent examples, prove that this country of ‘manageable’ size and population can make things work quicker than countries in the neighbourhood.

Nepal is one of the few countries in the world today where there exists today a vibrant movement for a return to democracy and where the contours of that democracy is already visible in dawn’s early light – not many can say that for Pakistan, for example. When the chairman-king cracked down, the civil society-in particular the lawyers, the human rights defenders and the journalists-did not succumb. Instead, over the past year, they ratcheted up their opposition and rejected outright the continuous flow of royal ordinances and orders . This movement for democracy has remained on track despite the fact of the spoilsport Maoists (whose leadership sees the writing on the wall but is yet to pick up the courage to tell the romantically radicalised cadre that the game is up) and the countrywide crackdown with the help of the Royal Nepali Army.

As this is being written, the royal regime is hell bent on preventing a rally planned for today by the political parties. But this additional act of authoritarianism will only trigger the end of this authoritarian interlude. Nepal will revert to a parliamentary democracy, only a more mature and committed one than the one introduced in 1990. The national economy is like a coiled spring waiting to take advantage of open society and it will expand at such a pace that it will be all the managers can do to control it. Likewise, the social sphere will respond with alacrity to the demands of inclusive democracy now heard loud and clear, and understood, across the land.

All in all, the actions of Chairman Gyanendra are hastening the day of deliverance. Which is why, in the darkest hour, the spirit is up.