It used to be that the sound of helicopters in Nepali skies was cause for dread, for two reasons. First, it could mean there was an insurgency attack somewhere, and the helicopters were ferrying the dead and wounded. The thud of MI-17 helicopters after dark caused added anxiety for beleaguered civilians in remote district headquarters. Second, in the latter days of the Maoist insurgency in Nepal, a ‘Royal’ Nepal Army unable to take on swift-footed insurgents on the ground had decided on a strange tactic: lobbing mortar shells from helicopters onto populated hillsides. They scared the rebels alright, but also everybody else in the line of mortar fire. 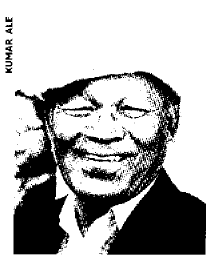 With a ceasefire in place since April and the Maoist leaders to be found in Kathmandu seminar halls (and suddenly taking to foreign junkets), the guns are now silent in Nepal – although their threat remains. The Maoists still hold the gun in their hands, hoping to gain maximum mileage during the ongoing negotiations. Meanwhile, the military helicopters are mostly grounded, as are the chartered private rotary wings that in the past have landed stuffed with the bodies of dead policemen.

But helicopters still cause death in Nepal. On 23 September, an MI-18 crashed headlong into a clouded hillside in eastern Nepal, instantly wiping out a whole category of wildlife and conservation expertise, including, as one report had it, “outstanding planners, biologists, botanists, geographers, ecologists, sociologists and conservation managers”. In this group was Harka Gurung, a longtime, multidisciplinary pillar of Nepali geographical scholarship. Then there was Gopal Rai, Minister of State for Forests and Soil Conservation, as well as his wife. Narayan Poudel was director-general of the Department of National Parks and Wildlife Conservation; Mingma Norbu Sherpa hailed from the Khumbu heartland of Nepal, and was director of the World Wildlife Fund’s Eastern Himalayas Programme; Chandra Gurung, from Sikles village in central Nepal, gave life to the innovative Annapurna Conservation Area Project; Tirtha Man Maskey was a forester who gave life back to the gharial crocodile by developing innovative breeding in captivity…

The list goes on and on. This was a dedicated group of Nepali and international conservationists, on their way back to Kathmandu after Minister Rai, on behalf of the government, had officially transferred management of the Kanchenjunga Conservation Area to local communities. At the ceremony prior to boarding the helicopter, Mingma Norbu Sherpa had said that it was “a historic day for one of the world’s most spectacular natural treasures”.

If there was one discipline where modern-day Nepal had developed some top-notch expertise, it was in the arena of wildlife conservation and habitat protection, particularly where it came to involving communities in habitat protection. Nepal’s successful community-forestry programme of the last two decades has suddenly turned the study of Himalayan ecology on its head. Across Nepal, forests are on the rebound, and the ‘Himalayan degradation theory’, which sought to blame the midhill peasantry for land erosion and even floods in the plains, has been relegated to the dustbin.

Many of the experts who assisted in puncturing that theory on behalf of the people of the central Himalaya perished in the MI-18 crash, amidst the high ravines of the Kanchenjunga region. They had grasped the reality that in populated regions, forests had to be protected and wildlife conserved first and foremost for the sake of the local inhabitants. Local communities in turn benefited through better access to forest produce, cultural stability amidst dislocating modernisation, and enhanced tourism. In the process, nature got conserved.

Nepal, having the highest population density for any region of the world, but endowed with natural beauty and natural resources, was the ideal laboratory for seeking an evolution away from the colonial era practice of promoting wildlife reserves to the exclusion of the people. Indeed, those in the helicopter were a climax species of sorts: of conservationists who understood both natural science and people science. At a time when Nepal has entered a confusing transitional phase on the road to peace after 11 years of violent insurgency and state reaction, there have been almost no initiatives worth the name from the interim seven-party government.

The exception was the planning and inauguration of the Kanchenjunga Conservation Area, which stands alone as an effort of the government, though prodded on by the World Wildlife Fund. It would not have mattered quite so much if a dozen people from any other discipline had perished in a helicopter crash in Nepal – be they economists, educationists, administrators, politicians, civil-society actors, NGO administrators, urban planners, architects, journalists, or business proprietors and executives. But these conservationists of Nepal were international-level stars, of a calibre that the country has yet to generate in other disciplines.

That is why the loss is felt so deeply.