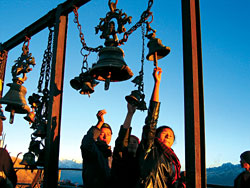 Now to make peace deliver development to a ravaged land

The credit for the Comprehensive Peace Agreement goes to the political parties of Nepal-detested by the extreme right royalists, the Maoist supporters of the far left, and Kathmandu Valley’s upper crust. As responsible, elected people’s representatives, they reached a magnanimous compromise with the CPN (Maoist), to keep the latter from reverting to brutality and saddling society with more years of violence.

The peace agreement, though couched in language that appears balanced equally against the state and rebels, makes demands on the Maoists to abandon violence in word and deed. It is, finally, though not in so many words, the declaration of abandonment of the ‘People’s War’.

This is Girija Prasad Koirala’s hour of recognition, having held out against international naysayers and standing steadfast against Maoist attempts to deliver a less-than-pluralistic finale to Jana Andolan II. Going against the populism which had made the intelligentsia reluctant to challenge the Maoists, Koirala followed his own course, utilising the stature he had acquired even with the rebel leadership.

And what of Pushpa Kamal Dahal? He showed nerve and steel in turning his insurgency a full 180 degrees, and bringing his commanders along with him.

Whether he can now bring along his entire cadre as well is the next challenge, one which will truly be a measure of the success of the agreement signed last Tuesday evening. While Dahal has thankfully turned out to be more politician than revolutionary, we now have to await the CPN (Maoist) as a whole to convert from a militarist force into a political party, one that does not extort, abduct, threaten, and act as if nobody would notice.

The magnanimity of Nepal’s politicians was obvious in their willingness to provide the Maoists a presence in the interim government and interim legislature equal to that of the two large parliamentary parties. The sacrifice made by the CPN (UML) in this regard is noteworthy, for it has allowed the perception to develop that a gun-wielding rebel group has equal status as a party which has stayed steadfastly within non-violent practice.

The rebels now have to traverse a vast ideological distance when serving in government and the hybrid interim legislature, where they will have to jettison practiced rigid polemic and replace it with principled positioning. Can they adjust to the practicalities of governance, so far removed from gun-in-hand sloganeering? Ideologue Baburam Bhattarai does maintain that this is the time to concentrate on delivering the constituent assembly, which will tackle the larger issues of state transformation; but we have to see how things play out around the cabinet roundtable and in the interim House.

Dahal and Bhattarai now also need all their dialectical skills-so clearly visible in Delhi last week, where they shed all pretence of the anti-Indianism that has been the leitmotif of their rebellion-to manage the myriad contradictions of an ideology-driven insurgency that has not publicly conceded defeat. They understand better than many Kathmandu-based analysts that the people in the districts are sullen with the years they have suffered under the commissars and militia. But unlike Gyanendra the king, the Maoist leadership will hopefully not miscalculate the democratic values held dear by a rational, sophisticated populace.

The Nepali proclivity to conduct negotiations in the full glare of floodlights week after week might have exasperated some foreign observers, but one could say that these were the most ‘transparent’ negotiations to be conducted anywhere-an example, indeed, for the world. More importantly, the public sharing of the daily ups and downs provided a crucial cushion to prepare the Maoist fighters for the changing times. While not mentioned in any of the celebratory prose after Tuesday, the Indian government’s positioning on the guns-and-government issue obviously played a part in moderating rebel demands, while the UN role in overseeing ‘arms management’ and the election process has provided some confidence in the outcome all around.

In fact, the politicians and peasantry alike are relying too much on the United Nations mechanisms-Ian Martin’s office and the OHCHR in particular-for the monitoring of the peace agreement and attendant ceasefire and human-rights matters. They will not have enough reach if Nepal’s government administration does not activate itself, and if civil society gets drowned in the upcoming ‘donor tsunami’ and neglects to be a proper watchdog of the people. With the National Human Rights Commission as a broken entity, we must have a monitoring committee of half-a-dozen eminent persons to hold the state and rebels to account. But it must be one that does not resemble the ungainly truce monitoring committee set up in June with more than two-and-a-half dozen members.

Even as the PLA fighters arrive by the thousands at designated camp sites that are as yet without infrastructure, the term ‘militia’ does not find mention in the lengthy agreement document. And it is the rebel paramilitary-especially the opportunistic ‘Maoists’ among them who do not have the ideological commitment of the mainline cadre-which would most likely contribute to destabilising the polity in the days ahead. There is scepticism about how a government with Maoist participation will deal with wayward militia, and this is where Dahal will have to show an improved record compared to the months past.

Krishna Prasad Sitaula deserves congratulations as the impresario of the peace agreement, having nurtured it since the semi-secret confabulations in New Delhi in the autumn of 2005. However, it is time now for the Home Minister to get a handle on national law and order. Without the presence of a highly motivated and committed Nepal Police force in the villages, and motivated district administrations all over, the state will remain absent from the rural hinterland. And without it, there will be precious little governance or peace dividend, as far as the people are concerned.

If and when the populace becomes disenchanted with the lack of governance or with service delivery, the reactionaries in the palace, army, and the erstwhile power elite will perceive an opportunity to make a move. There is no doubt that the Nepal Army can still swing back to the palace like a released spring, should the interim government be seen to falter. This potential reactionary threat must be understood by the politicians of the SPA, but even more so by the Maoist leadership, so they can hold back on their public radicalism in the House and Cabinet.

A possible rightist reaction is one more reason why an enormous effort must be made to conduct the constituent assembly elections by early June. Shifting the polls to post-monsoon, possibly post-Dasain/Tihar 2007, will surely destabilise the state. Besides the unending sankramankaal-interregnum-with its attendant weak government, poor service delivery to the citizenry, and the Maoist fighters in the cantonments, would represent a pressure-cooker of discontent that could explode with great violence. Nepal would become a tinderbox, which even the monsoon rains would not be able to douse.

With the Comprehensive Peace Agreement in place, and as the government administration seeks to re-establish itself all over the country, it is finally incumbent upon the political parties to enter the villages and not remain diffidently sequestered in district headquarters. The promise of the April Uprising was the sidelining of the gun and the revival of politics. This required crushing the royal design and bringing the Maoists into open politics, before heading for the constituent assembly. That process is taking longer than expected, which is why all energy must now be concentrated on pushing through the constituent assembly by early June.

If this unexpectedly lengthy sankramankaal is not to make the people disconsolate, the political parties and all layers of civil society must work together to give the people hope. And by ‘political parties’, we hope to also mean the Communist Party of Nepal (Maoist).