Those who say with cynical certitude that elections cannot happen on 10 April do not know what they are talking about. They are the kind who would very much wish that their armchair prediction comes true, for whatever reason.

The fact is, there are too many variables in Nepali politics (new challenges, potential conflagrations, but also possible turnkey solutions) for anyone to be so sure that the polls cannot not happen. The public, for its part, desires the constituent assembly elections desperately. But wanting them is not enough. The political parties, the government such as it is, and the madhesi leadership must work to make them happen.

We can get there if the political players work intensively over the next 10 days or so. Then they must begin to seriously discuss election observation, voter education regarding the mixed system, the election code of conduct, and ensuring security during polling.

And it will be a relief to actually get to the point where we can be discussing how to prevent ‘booth-capturing’ by first-time parties, and first-time losers going on rampage. This river is full of boulders and rapids, but we have to get to the other side.

Just because the elections have been deferred twice, it doesn’t mean they have to be deferred again. New demands are piling up on top of old, unfulfilled demands, but that doesn’t mean elections can’t happen in April.

To begin with, one needs to analyse why the first two attempts fell apart. Polls had to be put off in June for logistical reasons: politicians were busy putting into place the code of conduct, the comprehensive peace agreement, the interim constitution, interim parliament and interim government. An insurgency can’t be transformed overnight and the most the politicians can be blamed for is being optimistic about the scheduling.

As far as November is concerned, even though the key janajati and madhes groups had signed on, the Maoists got cold feet. But then the rebel radicals couldn’t show any chamatkar and so now we would have to believe that the party is ready to take the plunge. In the interim, the madhes has come onto the boil, with several new political organisations intent on creating a political base in fast-forward.

Meanwhile, the parliamentary parties are in election mode, with the leaders back on the campaign trail they have not walked for nine long years. True, there are factions within the Nepali Congress and CPN (Maoist) which do not want polls, but their potential for damage is limited if the momentum picks up. The same holds true for those who would wish for a rightward slide of the polity.

But the six-plus-one parties have not focused enough on the madhes issue, which has to be resolved to get the country to the ballot box. In fact, the first joint mass rally in Kathmandu on 14 January had the flavour of a pahadiya challenge to the madhesi-just the wrong message at this time, when symbolism has become so important. (The subsequent rallies in Biratnagar and Bhairahwa corrected the flavour somewhat.)

Madhesi demands can be tackled with relative ease, but for that you first have to have a functioning government. Girija Prasad Koirala’s distanced leadership has become more remote due to illness, and senior kangresis are up in arms about the elevation of the First Daughter to ministerdom and chief troubleshooter. Meanwhile, the formal position of peace-negotiator is with Peace Minister Ram Chandra Poudel, who seems intent on going it alone with overstatement and loud diplomacy. 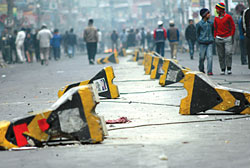 Amidst all this, the new entities in the tarai are trying to build a political base in a region electrified by last winter’s Madhes Movement. Madhesi leaders face challenges on several fronts: the widespread populism that has gripped large parts of the tarai, a brutal militancy that demands obeisance, and a Kathmandu which seems incapable of extending even simple courtesies. Amidst these challenges, the politicians of tarai-madhes have maintained a sense of proportion and responsibility.

The hill-centric national leadership needs to pay attention to demands coming from the working alliance of Upendra Yadav, Rajendra Mahato and Mahanta Thakur. A state establishment that has been magnanimous with the Maoists could well attend to madhesi grievances.

The tripartite madhes leadership wants a commitment to autonomy (swayattata, not limited to the tarai people), a term which would be defined for the Nepali context by the sovereign, elected constituent assembly. In fact, autonomy is already mentioned in the government’s agreement with the Madhesi Janadhikar Forum of last August. It would be the task of the proposed state-restructuring commission to go deeper into the matter.

The plains leaders also seek electoral reforms or, alternatively, flexible interpretation of existing regulations to allow their fledgling parties to choose more madhesi candidates under the ‘proportional’ list of the mixed system. Meanwhile, the grating issue of under-representation in the state machinery must be addressed with a promise of fast-track inclusion for disfranchised communities through the Civil Service Commission in the days to come.

If the madhes matter is indeed a challenge to the holding of elections, then it is a question of deciding whether these distilled demands can be accepted before populist pressures force the Thakur-Yadav-Mahato trio to shift the goalposts. The demands, shorn of microphone rhetoric, can be agreed to without taking away the right of the elected constituent assembly to define the relevant terms, be it federalism or autonomy.

The assembly, after all, is where the vertical demands of individual communities of plain, hill and mountain will come up against each other, and where finally some horizontal give-and-take will begin to give shape to the new structure of the Nepali state. That is why we have to get to the elections on 10 April, as it is clear there will not be a fourth opportunity.