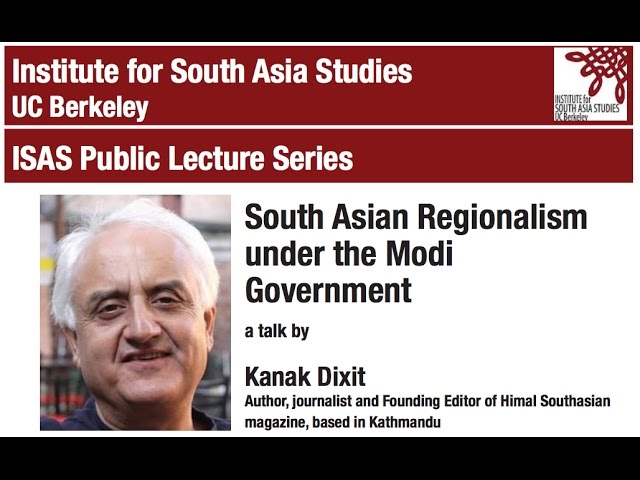 Join us for a talk by Kanak Mani Dixit, Author, Journalist and Founding Editor of Himal Southasian magazine, based in Kathmandu.

The concept of Southasian regionalism is under attack before it has even got a fair hearing. It has always been received with skepticism by the various governments for its potential to challenge the all-powerful notion of the nation-state. With the arrival of Narendra Modi on the stage, he has proceeded to weaken the SAARC organization, a weak regional entity which nevertheless indicated the governmental ‘buy-in’ of the idea of regionalism. The cancellation of the 19th SAARC Summit meant to be held in Islamabad, at the instigation of New Delhi, was the best indication of the weakening Southasian regionalism. It followed up on the pointed words by Indian Prime Minister Modi at the 18th SAARC Summit in Kathmandu, where he said that the bonds between countries of the region would grow “through SAARC or outside it, among us all or some of us”. This weakening of the Southasian concept is unfortunate because, all said and done, it is an idea that promotes both social justice as well as multiple, complementary and accommodating identities. Instead, we have sharper borders and harsher rhetoric. If we value the idea of historical India in the modern era, then we must work to strengthen the idea of Southasian regionalism.

Kanak Mani Dixit, is a journalist, writer, civil rights activist and Founding editor of the Himal Southasian regional review magazine, as well as publisher of the Nepali language weekly Himal Khabarpatrika. He has degrees in Law (Delhi University), International Relations and Journalism (Columbia University). He has been a journalist since 1971, and worked in the United Nations Secretariat between 1982 and 1990. Lately, he has been engaged in civil rights activism in relation to peace, democracy and human rights in Nepal. Himal Southasian was begun as a Himalayan magazine in 1987 and transformed into a Southasian periodical in 1996. Since then, through the pages of the magazine, Dixit has been engaged in the quest to define the Southasian space and identity. He is also a political commentator on Nepal affairs, in the Nepali language dailies, in Himal Khabarpatrika, The Nepali Times and (as a columnist) The Kathmandu Post.

Beyond journalism, Dixit is linked to the Film Southasia festival of documentaries, Spinal Injury Sangha-Nepal, Shikshyak magazine for Nepal’s school teachers, and the Jagadamba printing press. He is also involved in activities related to libraries and archiving (through the Madan Puraskar Pustakalaya), social science education (Social Science Baha), human rights (the Accountability Watch Committee), public transport (Sajha Yatayat), architectural preservation (the Kathmandu Valley Preservation Trust), and activities broadly in the cultural sphere through the Himal Association, the YalaMaya Kendra and other organisations.

Dixit is translator of Bishweshwor Prasad Koirala’s Atmabrittanta: Late Life Reflections and is a children’s author, including of the much-translated work, The Adventures of a Nepali Frog and the more recent Every Which Way up Everest. Having contributed to several Southasian anthologies, he is also author of two works of political commentary, Dekheko Muluk (‘The Country I See’, Jagadamba Prakashan) and Peace Politics of Nepal (Himal Books). Some of Dixit’s writings are archived at www.kanakmanidixit.com.