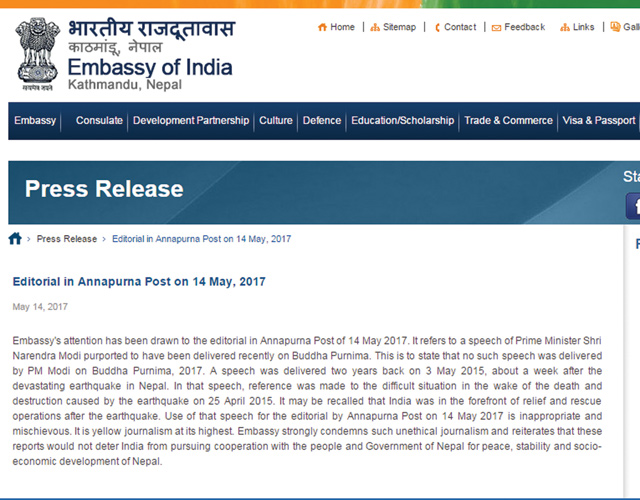 Press releases are used by embassies in a considered manner to express nuance that the spoken word may not be able to carry. Hence, we must read them as trying to get across an intended meaning, which allows us to analyse the urge and tilt of the embassies and incumbent ambassadors. Three press notes of the past week, from the Indian, UK and US embassies, need to be taken up vis-à-vis message as well as tone of delivery.

On 3 May 2015, Prime Minister of India Narendra Modi delivered an address on Buddha Purnima, where he spoke with concern about the grave challenges facing Nepal following the earthquake of the week previously. That video resurfaced on YouTube last week, presented as a fresh speech by Modi, which if true would have amounted to grave intervention in political affairs in the context of local elections.

The Annapurna Post daily carried an editorial on 14 May saying as much, and many in Kathmandu believed that the video displayed Modi’s attitude towards Nepal’s political process. The Indian Embassy was rightfully incensed and on the very same day produced a strongly worded press release condemning the editorial, which it stated was ‘inappropriate and mischievous’ representing ‘yellow journalism at its highest’.

But the air did not clear as much as it should have, because the Kathmandu press as a whole failed to report the Embassy statement. This may be partly ascribed to the reluctance of media outfits to critique a competitor, but it also reflected poor news sense. The fact that Modi’s speech was being read in the wrong context was news in and of itself, and editors should have sought to correct the mis-impression on their own. But even the release was not picked up. 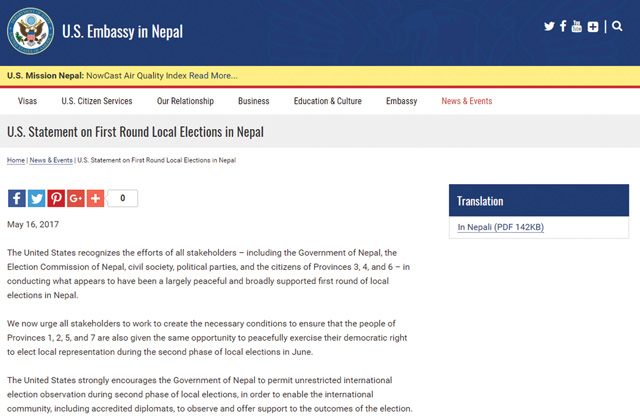 The media also did not register a brewing resentment among some Western embassies for not being allowed to observe last week’s local elections. The British Embassy came out with an irate statement on 15 May, which after perfunctorily welcoming the commencement of local elections, added: ‘We are not commenting on the process at this stage.’

If the embassy was not commenting, why was it commenting? The country has gone through such heartburn and heartache to finally get to this point of local elections after a period of two decades, there have been so many unconscionable compromises made, and the exercise was so enthusiastically embraced by the voters, that Nepalis deserved something more than a ‘no comment’.

‘We urge progress from all stakeholders to work to create the necessary conditions to ensure that the people of the remaining four provinces are also given the opportunity to exercise their democratic right to directly elect local representatives on 14 June,’ the statement continued.

Other than the awkwardness of the ‘urge progress’, the substantive problem here is with the diplomatic code that is impossible to decipher. We know where the knot is: the Rastriya Janata Party demanding amendment of the constitution (on province delineation, electoral college, local entity numbers) the willingness of the government coalition to go through with it, and the refusal of the parliamentary opposition to concur. If it has to speak, the embassy could tell us where it stands on the matter, rather than send out a statement that can be interpreted any which way. 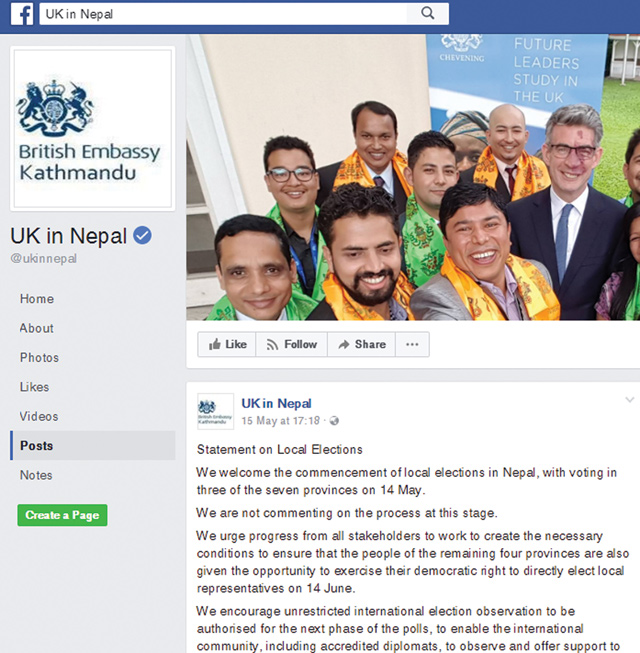 The U.S. Embassy press release of 16 May also is niggardly when it comes to praise that is rightfully deserved. The embassy ‘recognizes the efforts of all stakeholders … in conducting what appears to have been a largely peaceful and broadly supported first round of local elections in Nepal’. The term ‘recognizing’ is rather like the Indian government ‘noting’ the promulgation of the new Constitution last year, a pointed refusal to say ‘welcoming’.

The phrase ‘what appears to have been’ obviously refers to the Embassy’s inability to observe the elections by itself. Granted, the Election Commission should have allowed Western and other embassies to have free range of hill, dale and plain – the way it has in the past and the way no other country in South Asia allows you to – but there are many ways that the ambassadors could have confirmed the enthusiasm and participation in the first round, and there were thousands of poll observers in the field.

A substantive press release rather than one emanating from a sense of loss of personal entitlement would have cited the importance of local elections after two decades of vacuum, that it will give rise to the birth of local political leadership. If a critique were required, how about the lack of women and Dalit candidatures on the non-reserved seats, so that mistakes are not repeated in the second round?

The embassies could/should also have weighed in on the compromises made by the political parties and Election Commission to get to the first phase, and how internationally acceptable principles were diluted. Should we have announced the first phase results before the second phase? Is it correct to amend constitutional provisions relating to local level entities in midstream, between the two phases?

There will be sensitive subjects which the embassies may not breach nor broach, but universal democratic electoral principles should surely be open to discussion? Say something, or say nothing, should be the goal, and one could sign off by suggesting that perhaps Nepal should be having public positions on elections being held, with far less turnout than our 73 percent, in the lands of the triumph of Trump and the Brexit vote. (‘Smiley.’)