“Have you got pulled into a vortex of your own making?” asks the opening lines of a song by the music maestro Amber Gurung. The words fit the present-day context of Nepal perfectly, where a king very new to the throne, with the arrogance that is the hallmark of the impenetrable, is engaged in the relentless pursuit of dismantling his dynasty. But does he even know it? 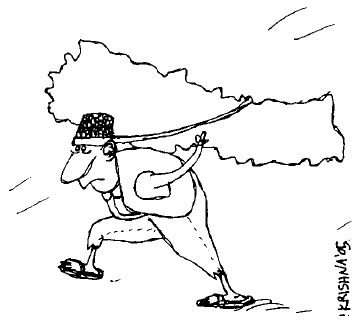 The citizens at large did not want it this way. In professionally conducted public opinion surveys, they had stated their preference for a constitutional monarchy. But the stock of the Shah dynasty took a beating when King Gyanendra started appointing prime ministers by himself in October 2002. The public’s regard for the king plummeted when on 1 February, in a military-backed coup, he ripped apart the 1990 Constitution and became ‘chairman’ of the government, a position it does not sanction. The king had in essence become prime minister, but you would not know it – he maintains the bearing of an aloof monarch even as the economy slumps, public services break down, and development grinds to a halt.

Faith in tantric practice, animal sacrifice, a willingness to have army brigadier generals tie his shoelaces in public (or provide Scotch on their knees), all point to a royal attitude that is pre-feudal and beyond the reach of logic. Extremely engaging in conversation, but unwilling to take the sage advice of those who have spent a lifetime in statecraft in comparison to his own four years, King Gyanendra has exasperated personages as diverse as key ambassadors in Kathmandu, the UN Human Rights Commissioner Louise Arbour, former US Senate Majority Leader Tom Daschle, and the Special Envoy of UN Secretary General, Lakhdar Brahimi. Not to mention Indian Prime Minister Manmohan Singh.

King Gyanendra’s regime has become an international pariah, though the country as a whole will hopefully survive that fate. His global isolation is so complete that he has had to cancel his scheduled departure this week for New York to attend the UN General Assembly and World Summit. The reason: the unwillingness of world leaders to give the king the time of day, let alone appointments and photo-ops. The isolation within the country is also nearly complete, with even businessmen who sang hosannahs to the royal takeover preparing to abandon the sinking royal yacht. There is no trust in this regime among the beleaguered Nepali public, and little hope that it will deliver the desperate peace. Meanwhile, the regime has painted itself into a corner so tight that King Gyanendra could not even bring himself to issue a cautious welcome to the unilateral ceasefire announced by the Maobaadi on 3 September. That would have been the way of a democratic leader.

For someone who has dismissed prime ministers for being ‘asakshyam’ (incapable), over seven months King Gyanendra showed that he neither knows how to lead a nation nor run a government administration. The political leaders, public targets of royal scorn, now shine in comparison. The ship of state today is adrift and the rudder shaft broken, but the incumbent on the Serpent Throne seems willing to man the helm just the same. Nepal is today a skeletal frame of the already emaciated form that the king grabbed seven months ago. If anything more was required to weaken the state after the Maobaadi were done with it, then King Gyanendra has managed it.

Speaking of statecraft, the king’s choice of colleagues in his cabinet (including an ex-convict) is so ludicrous it does not even deserve reference. The recent appointment of a royalist opportunist to the post of chief secretary of government over the head of capable claimants splatters no one but the chairman himself. Meanwhile, the gentleman the palace is grooming to be commander-in-chief of the army is given to writing right-wing polemic in Kathmandu’s English dailies under the nom-de-plume ‘Ajay P Nath’. The writings of Mr. ‘Nath’ fairly drip with loathing for the political parties and human rights activists, among others, and have the thoughtful among the army officers reeling in silent despair as to what the future holds for their force.

How far the royal stock has fallen among the public in just a few months can be observed in the Nepali language mass media’s abandonment of the royal honorific and associated verbs and nouns. Cartoons in the dailies and magazines lampoon the king, even as stand-up comedians ridicule him in public as they would a politician. When the king, on a barn-storming trip across western Nepal, ordered that all regional headquarters of government offices be moved to a particular place within so many days, civil servants willing to be quoted by name challenged the royal command. In the end it is one man who has brought the Nepali monarchy to such a pass, for wanting more power than the constitutional provisions and propriety allowed. As a result, he is about to lose it all.

This writer made the point some years ago that, contrary to the claim of erstwhile Panchayat era propaganda and assorted royalists, “Nepal is robust enough a country to carry on without a king.” Kingship was not necessary as the much-ballyhooed ‘glue’ for a diverse nation. On the other hand, it would have been “monumental folly” to get rid of an institution that provided Nepali citizens with historical continuity like in no other Southasian country, which could serve the public in the cultural, development and tourism arena. That was written at a time when there was still the hope that the kingship would evolve constitutionally, in letter and in spirit. But the incumbent king has showed himself temperamentally unwilling to be constitutional, ceremonial or rubber stamp, which is what he would have to be if citizens were to allow him to hold the crown.

And therein lies the rub. The king has made a blunder and yet he carries on. The political parties have been late in rising to the occasion to save the hallowed middle ground, unable to come to the rescue of democracy seven long months after the royal takeover. As a result, the political ground has shifted, and the discourse is now neatly divided into three strands and three terms. Prajatantra is the handed-down term for democracy, which King Gyanendra prefers because he can define it to his purpose. Loktantra is the word for democracy rapidly gaining currency, meaning a true people’s democracy with or without a king. And lastly, ganatantra, a republic in which kingship is banished forever. Ganatantra is all the rage in the Kathmandu streets today, and the pathway is said to be through a constituent assembly. This is also the demand of the Maobaadi, except they say so with gun in hand.

This is the rock and a hard place between which the people of Nepal find themselves today. The king’s personality indicates that he would be a meddlesome canker even if shorn of all power in his position. On the other hand, the Maobaadi giving the siren call from the jungle are battle-hardened believers in armed revolution, which the people are not. An earthshaking people’s movement required to force King Gyanendra to backtrack and for the political parties to take the initiative in reviving the third parliament and in building rapproachment with the rebels has not happened. The initiative has therefore gone to the Maobaadi, who announced their unilateral ceasefire on 3 September. A skeptical but hopeful people await evidence that the rebel leadership has come to its senses. “Do not trust them, but do test them,” seems to be the public’s attitude. With King Gyanendra haughtily looking the other way, there should be no surprise that the political parties are talking to the Maobaadi. Whether this tentative encounter will make good will depend very much on whether the rebels can convince the parties through action on the ground that they are now, at long last, for peace and open politics. If they can manage that, this king will be on the outside, looking in.

While we wait, the surface is calm in Kathmandu. The countryside is in shambles and the state superstructure is rotten within. King Gyanendra’s scofflaw monarchy, crown and all, pushes the country towards the abyss of anarchy. He got it wrong, and now the initiative is largely gone from his hands. Meanwhile, the tallest spire of the Narayanhiti Royal Palace in downtown Kathmandu suddenly sports a powerful strobe light – or beacon perhaps – that goes blip-blip in the darkness.