As the postponed 13th SAARC summit comes nigh in Dhaka in the first half of November, we must once again go through the exercise of trying to understand our region beyond the matrix defined by SAARC. That formula itself is simple: seven nation states, seven capitals, seven power elites, one under-funded secretariat and a summit every now and then. This is good so far as it goes but Southasia’s people deserve better.

While the seven-nation formula is of course one way to consider the Subcontinent and surrounding islands, we must seek other definitions. There is no reason why Afghanistan, Tibet and Burma should be neglected when we consider Southasia.

As consumers of news, each of us is either enmeshed within our own national economies and politics or forced by the globalised television media to concentrate (as in the last month) on the evacuation of Gaza, Katrina and the bewilderment of George W. But if we look at the Southasia beyond the boundaries of SAARC, there is surprisingly a lot happening that we should be aware of. Take the cases of Afghanistan politics, railways in Tibet and Aung San Suu Kyi.

Afghanistan goes for its first ever general elections on 18 September, a historic occasion even for those who detest the fact of the post-9/11 American invasion. By the grace of George W, we have the cloak-attired former Unocal employee Hamid Karzai as our constant companion on the television screen, carefully maintaining his gracious profile, cloak and all. But this inevitable election exercise, pushed through to burnish George W’s credentials more than anything else, is bound to throw up new faces who are-at long last-politicians. If it happens, this will be a pleasant shift away from warlords like Dostum and the late Massoud.

One of the persons to watch in the Afghan politics is Yunus Qanooni, leader of the New Afghanistan Party, a former cabinet minister under Karzai. He is unhappy with the way the elections are organised but is willing to go with it. He believes that the balance of power will have to shift from the office of the president to the new Afghan Parliament.

If we need to know about Qanooni, so too must we keep abreast with the fact that a 1,118-km railway line is reaching south from the Chinese mainland (Golmud in Qinghai) all the way into the heartland of eastern Tibet, crossing the Kyichu River and arriving in downtown Lhasa. The railway is bound to change the face of the high plateau by opening it up for further population migration, industrial activity and demographic transformations that will make the Dharamshala government-in-exile even more beleaguered. What does Tenzin Gyatso, the 13th Dalai Lama, think of the railway line? And how will it affect the social fabric of the Tibet Autonomous Region, already in tatters? 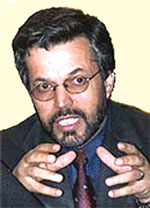 At the end of this month, the Nathula border point between Sikkim and the TAR is to open for trade under an agreement signed between Beijing and New Delhi in 2003. The expectation has been that this route, first opened by Francis Younghusband in 1904 but locked up since 1962, would provide Lhasa its closest access to the sea and that Siliguri and Calcutta would benefit mightily. What is going to happen now that a railway links TAR directly with the mainland on the other side?

Aung San Suu Kyi, epitomising all the Gandhian values of mind over matter, should be the world’s most revered Prisoner of Conscience – but we rarely ever think of her in her house arrest. As Burmese, she is more Southasian than Southeast Asian and has lived in New Delhi (Lady Shree Ram College), Thimphu and Kathmandu and written books on Bhutan and Nepal.

Let us be frank: we do not really care that much for Aung San. The geopolitics that swirl around Burma makes her a heroine but holds her cause hostage. It gives Rangoon’s generals breathing space. The Thais just want to do business with Burma, all China wants is a docile neighbour and New Delhi has decided to engage the junta rather than let it disappear completely into Beijing’s sphere of influence. Which is why, in a roundabout way, we do not to get to hear about Aung San.

Aung San Suu Kyi’s incarceration began on 20 July 1989. She is under house arrest now, and has been for 10 of the last 15 years. She refuses to be “bribed into exile”, in the words of Vaclav Havel. She is 60 years old. She is a Southasian Prisoner of Conscience.