Langtang Lirung forms the perfect snow pyramid when viewed from points south, including Kathmandu Valley. What is not immediately evident is that the peak presides over a beyul-a spiritual sanctuary-enchantingly close and accessible. 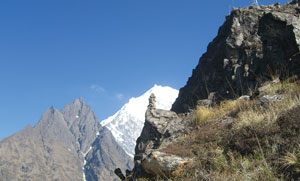 Accessible, that is, if you discount the terrifying high road that leads up past Trisuli Bajar to Dhunche in Rasuwa and do not have to contend with a driver focussed on locating and swatting flies even as the bus negotiates the ledge of a highway 800 vertiginous metres above the Trisuli.

The Trisuli rushes down from Kyarung in Tibet, but you leave the bus to take the east fork at Syabrubesi, following the gorge of the Langtang Khola. The lower reaches of the gorge are a deciduous zone rich in birdlife and flowers and harbouring the elusive red panda. The day is devoted to walking uphill to the sound of falling water, past Pairobesi (‘landslide base’), Bamboo (‘Bombo’), Rimche (from where the map shows a non-existent trail up to the Gosainkunda lakes), Lama Hotel (many hotels in Lama Hotel, where an Alouette helicopter once crashed), until you arrive at Ghodatabela.

A day and a 1,500 m climb up from Syabrubesi, Ghodatabela is where the v-shaped river gorge begins to convert into the u-shaped glaciated valley of upper Langtang. The name comes from when Khampa fighters set up a commune here and housed their steeds in the stables, now in ruins. There is a much nicer local name for the place, describing it as the midway meeting point for up-valley and down-valley travellers, but I cannot find it in my notes.

Speaking of names, locals insist on Langdang with a ‘d’. The reference is to Guru Rimpoche, or Padmasambhav, who arrived here in the guise of a bull, ate, and was satiated (lang = bull, dang = to be sated). As for the locals of Langtang Khola, the census terms them Tamang, but they insist they are of the same stock as Helambu’s Yolmos (whom the census classes as Sherpa), and trace their lineage up north to Kyarung and Lende in Tibet.

But names will be names, and what matters is that the people of Langtang are the custodians of a remarkable sanctuary close enough to Kathmandu to touch, but old world enough that the lodges are still welcoming of ‘domestic tourists’. “We have retained our dharma,” says Dhendup of Ghodatabela.

The lodges here are fast dropping their Rasuwa rusticity, however, with the help of a tourism-for-poverty-alleviation project. You get clean sheets, solar powered lighting, and hot water showers up and down the valley. On the flipside, the distinctive local architecture that defines Rasuwa villages is being abandoned in favour of Namche Generic, constructions put up by rock- and-woodworkers imported from Solu.

Except at Kyangjin at the end of the trail, where garbage is openly strewn on the hillsides, Langtang is surprisingly clean. Sturdy Swiss-supported suspension bridges span the numerous ravines, while someone with a proclivity for pouring concrete has managed walking platforms across vertical rock faces to lessen detours.

From Langtang village, the view of Langtang Lirung is blocked by a towering escarpment, but that’s fair because the peak got its name from the locality, rather than vice versa. Following the Annapurna and Nanda Devi Sanctuaries, the area beyond this village deserves to be called the Langtang Sanctuary. You are surrounded 300 degrees with the

rocky ramparts of the Gosainkunda Lekh to the southwest, the fluted ridges of Gang Chenpo of the Jugal Himal chain to the east, Naya Kanga and Yala Peak, and the massifs of Langtang and Kimjung that elbow for space north by northwest.

At the centre of this sanctuary is Kyangjin, where an not-yet-gentrified gumba retains the flavour of local reverence, spiced with aroma of Tibetan tea, butter lamps, and juniper. The day of the full moon in early June, locals are busy refurbishing their faith, fasting and putting up fresh windhorses on hilltops. As part of their piety, the Langtangba do not kill the local yaks for meat. But they’re hardly puritan about it-lodge-owner Dawa in Kyangjin says when they go to Kathmandu they eat themselves sick on momos.

To eat well in Langtang, go during the yak cheese season in autumn. The cheese is made in a Swiss-built station that has been in operation for half-a-century, with expertise currently provided by two Jirels. The Swiss also had a hand in building the small airstrip in the wide valley below Kyangjin, but flights stopped when the last Pilatus Porter crashed. Today, Langtang is served mostly by helicopter charters.

There are other signs of modernity. Kyangin lodge-owners and staff like to listen to radio, but the wall of rock to the south blocks FM broadcasts from Kathmandu, so they tune in instead to tarai stations, whose radio signals somehow make it up here. Wireless CDMA phones are about to invade the sanctuary, and before long there will be full telephone and internet connectivity. Hopefully this will help keep back, or bring back some of the local youth, for whom the lights of Kathmandu are a natural draw, besides the momos.

It’s springtime in Langtang now. Yak calves are everywhere and afternoon clouds turn up to provide shade just when the trekker needs it most. But all is not well with nature. Global warming is no longer a theoretical discussion for the Langtangba-above Kyangjin Gumba the Langtang Glacier has receded so far up its bed that it can now only be called Langtang Icefall. The same holds true for the shorter adjoining Kimjung Glacier.

But Langtang is so serene that even the massive landslides which gouge the mountains are and have to be considered a natural part of the landscape. The geologists’ suggestion that landslips are a natural phenomenon in the Himalaya and cannot be blamed on the inhabitants, rings true in Langtang. As my trekking companion Shanta said, staring up at the massive scarring across from Rimche, “Why, even landslides have a right to go!” Certainly, in Langtang beyul!