24 May 2008. Somewhere in the ‘forward area’ along the Line of Control in Jammu & Kashmir. Pratibha Patil, President of India, is handed an AK-47 semi-automatic assault rifle. She reaches for it, smiles like a kid, and brandishes the weapon. She notices a camera and puts up a pose, pointing the gun towards the lens.

The bad odour of it all takes the breath away. Okay, the President of India is also the Supreme Commander of the Indian Armed Forces, but it was not necessary to rub salt in the collective wound of the Kashmiris, who for so long have been angry and agitated. Can one forget that many Kashmiris continue to regard Indian security as an occupying force, or that J & K has the world’s largest concentration of military personnel (at roughly a half-million) among a civilian population? 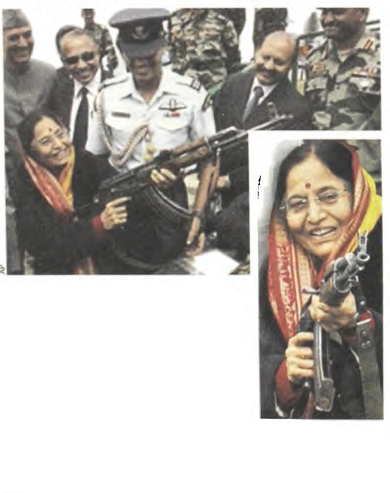 And so, let us try to replay the series of events. Madame President lands in her helicopter from Srinagar. She is taken on an inspection tour. She asks to handle, or is handed, the offending weapon. She strikes a pose at a rakish angle. Everyone grins – what a jolly good character is the president! Among those who see nothing amiss in these antics is the Congress party Kashmir stalwart and former chief minister, Ghulam Nabi Azad, at the rear left. The bodyguard is also game, as are all of the bureaucrats and soldiers in the background. Then, President Patil spots the photographer, and zooms in on the camera.

Back at the president’s public-relations office in Raisina Hill, the responsible officer could have quietly placed the images into the archive, if not the dustbin. But this was evidently seen as a great photo-op, to prove the 73-year-old lady’s warlike qualities – the amenable, dragon-slaying devi in the avatar of non-threatening sari-clad Marathi womanhood.

The Kashmiris did not take to President Patil’s visit at all, and Srinagar was closed with a bandh on the day of her arrival. But they liked the AK-47 photograph even less, painfully bringing up as it does raw memories and the realities of life under the gun – Indian security excesses, crossborder militancy, skirmishes, killings, interrogations and disappearances. Not to be sensitive to what the AK-47 means to the people of Kashmir, and to take this as just another militaristic PR opportunity, shows the chasm in the mindsets between New Delhi and the Valley.

President Patil is a Sonia Gandhi loyalist, so in the aftermath of the photo-taking, she had to be defended by the Congress party – which it dutifully did. “What the president did was aimed at boosting the morale of the forces who perform an onerous function in difficult circumstances,” said the party spokesman, Manish Tewari. But the president clearly had poor aim when brandishing her semi-automatic.

Interestingly, the response in the Indian media to the President with the Gun was muted, with editorials in what could hardly be called protest mode. Evidently, the safer way out was for reporters and commentators to bring up the reaction of the J & K MP, Omar Abdullah, who wrote on his blog: “I would have been thrilled to see a photograph of the president talking to kids, as a grandmother would, in some far-flung hamlet about the promise of a better future rather than this reminder of the one object that has caused so much death and destruction over the past 18 years … The photograph was of President Patil brandishing an AK-47 and smiling … Somehow the two things didn’t seem to go together.”

Such sentiments were not necessarily shared by other bloggers, however. “I believe there was nothing wrong with the gesture,” wrote one, “after all India is holding the entire Kashmiri nation against their will. I commend the president for being straight forward and not using Gandhian olive branch to cover up the brutal occupation. Good job Madam President.” Another noted, “Lets placate these silly complainers by having President Pratibha Patil pose with some children. Way to go Madam President, next time lets see you fire off a few rounds. Would there be any complaints if it was a male president posing with an AK-47?”

Of course, this issue goes far beyond gender. A male president, or the new governor of Kashmir, N N Vohra, posing with an AK-47 would and should come under the same kind of fire.

It is all very simple, actually, so simple that it evidently must be said. An AK-47 is a gun. A gun is meant to subdue and kill. The gun is held by the militant, as also by the soldier who defends the national security state. The national security state is a reality in large parts of Southasia, and comes down heavily on those who come into the direct line of fire, such as in Azad Kashmir and J & K, as well as in the Indian Northeast, the north and east of Sri Lanka, Balochistan and the NWFP. Those of us who do not live directly under the threat of the gun must understand what the gun means for those who do. Madame President made a mistake this time.