The sheer cliffs of the hilltop fort of Kot Kangra resonates with the students of Nepali history. Buying a IRs 5 ticket from the Archaeological Survey of India counter lets one into the fort and breathe in a little of the history that shaped Nepal. 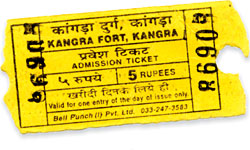 Here, the expansionist Gorkhali force from Kathmandu was blocked for the first time in its westward advance. Nearly 200 years ago, here at Kangra that the Gorkhali became Lahure (pronounced ‘Lahuray’). Today, all Nepalis who migrate downhill and outward to find work are known as Lahures. The flow of Lahure darbans and chowkidars continues to this day, but earnings are down by a third due to oversupply from war-torn Nepal. More than a million Lahures now also toil in the Gulf and Malaysia, sending back money that keeps the national economy afloat.

But in the beginning, being a Lahure was all about going to Lahore to serve as a mercenary: not for the British colonials but for Ranjit Singh, the Khalsa warrior king.
The Gorkhali forces under general Kaji Amar Singh Thapa had been unstoppable thus far on their westward push. The kaji had his eye on the pearl of Kashmir, to make Kathmandu’s empire-building ambitions complete. The citadel of Kangra state ruled by Sansar Chand lay in between. So, after crossing the Sutlej, Amar Singh laid siege. But the fort was nearly impregnable, and it is easy to see why for the visitor.

Three years of pillaging the surrounding territory was all that the Gorkhalis were able to manage before Amar Singh withdrew. But he was able to weaken the defenders enough that Kot Kangra became easy picking for Ranjit Singh, lying in wait in nearby Lahore and with imperial ambitions of his own. The Sikh raja walked in unchallenged on a carpet laid out by the Gorkhalis.

Ranjit Singh was impressed by the doughty Nepali warriors and asked those left behind by Amar Singh to join his campaigns. Thus it was that the migrant fighters of Nepal went to Ranjit Singh’s capital, Lahore, and became Lahures in 1809.

Before long, the Punjab states were all subdued by the British, and the Gorkhalis were taken on by the colonials following the 1814-16 Anglo-Nepal war. The rest is also history-the Gurkhas under the British fought for the British in Waziristan. And later, in Malaya, Gallipoli, Tobruk and the Falklands. And most recently manning checkpoints in Bosnia or Basra.

At Indian Independence, the Gurkha battalions were divided up between the departing gora-sahibs and the brown-sahibs. The Indian Gorkhas fought (and died) for the Indian Army in Kashmir, the plains of Punjab, the Indian northeast and Kargil.

The departure of fighting men is a critical economic reality of the Nepali hills. This export of young men holding Nepali citizenship to fight other countries’ wars reflect at once the deep poverty of the home country as well as the unfinished business of sovereignty-making. As long as wars were fought in distant lands, it did not matter much, but in these times of Southasian friendship it definitely makes for grave discomfort in Kathmandu when a regional conflict occurs. Indeed, if there is one reason not to wish an India-Pakistan war in Kathmandu, it is the fear for the lives of Nepali boys.

Since the times of the expansionist wars of the 19th century, and through the exploitations of the Rana and later the Panchayat era, the Nepali peasantry has had to make do for itself, joho garnu, in the Nepali languge. The peasant’s answer was to migrate, and that migration began in Kangra in 1809.

Political activists who in the Panchayat years had loudly demanded the cancellation of Gurkha/Gorkha recruitment promptly silenced themselves in the era of political freedom after 1990, realising the needs of the highland subsistence economy.

Nepalis do not inherently want to fight another country’s wars. There will come a time, soon, when a return to peace, democracy and political stability in Nepal will lead to sustained and equitable economic growth. At such a time, the Nepalis will stop joining foreign armies. Only then may the legacy of Kot Kangra be reversed, though two centuries late.