The ebb and flow of war and peace continues at the two corners of Southasia. The Maoist insurgents o 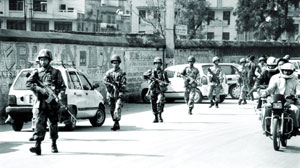 f Nepal have decided, at least at their very top echelons, to opt for open competitive parliamentary politics. They have extended their unilateral ceasefire by a month and all but ceased their rhetoric of revolutionary war. But the state establishment is unmoved.

At the other end, past the tip of the Subcontinent, a chauvinistic inaugural speech by the newly elected president, Mahinda Rajapakse, suddenly jeopardised four years of precarious peace achieved and maintained by president Chandrika Kumaratunga and opposition leader Ranil Wickramasinghe. The Tamil Tiger leader Prabharakaran rejected the speech and two landmine attacks in Jaffna this week killed 12 soldiers. Rajapakse on Wednesday asked Norway to resume mediation.

While Nepal sees the rays of a possible new dawn, Sri Lanka is suddenly pushed back to the brink of a familiar abyss. It is time to hold your breath in Sri Lanka and Nepal.

There are significant aspects of the Tamil ‘liberation war’ and the Maoist ‘people’s war’ which make the two situations dissimilar. The only lesson from Sri Lanka for Nepal is that a ceasefire can hold even if the peace process is stuck.

Nepal’s conflict can’t be resolved by studying the resolution in Sri Lanka, Mozambique or Sierra Leone. Resolution is always specific to the history of a country and the political and geopolitical matters speci

fic to that society. The millions of dollars spent by the multilateral institutions, assorted think tanks and INGOs in taking willing Nepali politicians, administrators, activists and journalists on conflict resolution junkets to Jaffna and Geneva have served a limited purpose. The answers were always in the hills and plains of Nepal not in the pubs of Dublin nor the seminar hall of the Carter Center.

If there was anything Nepalis could learn in Sri Lanka, it wasn’t in Jaffna but in the rural areas of the deep south where the Marxist JVP waged two uprisings in 1971 and 1989. They have much more in common with Nepali Maoists than the Tigers. Also, it would be instructive to learn how the JVP has in the past decade converted itself into a mainstream party that now plays a king-maker role in parliament.

While the JVP worked within the Sinhala communities of the south, the Tamil Tigers were and are a different cup of tea altogether. Their ruthless war has been based on identity politics. These are more virulent, fanatic and last longer. After all, it was the Tigers who more or less invented suicide bombings. The Maoists of Nepal, while they have tried to cynically exploit the susceptibilities of downtrodden ethnic communities, have been fighting what they identify as a class war. In theory, this is more easily resolved politically and by tinkering with the state’s delivery mechanisms rather than with the nature of the state itself.

While the LTTE takes significant support from the Tamil diaspora, not only are the Nepali rebels homegrown, the overseas Nepali working class does not form a significant source of funding for them. The military and state administration of the LTTE comes close to resembling that of a state, whereas the Maoists are ragtag in comparison. The LTTE has heavy artillery, a navy and it is rumoured even light aircraft. Nepali Maoist weaponry is almost entirely looted from the police and army. The tigers have a massive kitty in foreign banks, the Nepali Maoists on the other hand stash cash they got from looting banks and sponging off everyone from industrialists to the peasantry.

The LTTE has carried out massive bombings in the heart of Colombo whereas the Maoists have left Kathmandu Valley strategically untouched. The Tigers specialise in assassinations of national leaders, both Sinhala and Tamil, whereas the Maoists concentrated on the ‘removal’ of local teachers, activists and political leaders in rural areas.

No one would deny the injustice done by chauvinist Sinhala nationalism to the Tamil nor the burden of exploitative history on the rural people of Nepal. But by seeking to bring change through the gun, both movements have postponed the people’s future.

Till a month ago, Sri Lanka had seemed headed for shore while Nepal was being tossed around rudderless in the middle of a typhoon. Today, it seems the islanders have suddenly been overtaken by the storm while the highlanders have found unexpected hope.