Who knows how the bearded man got here to Dhanusha, in the southeastern plains of Nepal. But he told the villagers he was from Bangladesh. Before he was lynched.

Some quote police reports saying that he seemed mentally unsound. Before he was murdered. Perhaps he had crossed into India from Bangladesh at Chyangrabanda or Banglaband, or anywhere along the Indo-Bangla frontier where the border fencing is absent or down. He would have wandered across the identical landscape of northern Bangladesh, through the Chicken’s Neck strip of West Bengal, and into the districts of Jhapa, Morang and then Dhanusha. 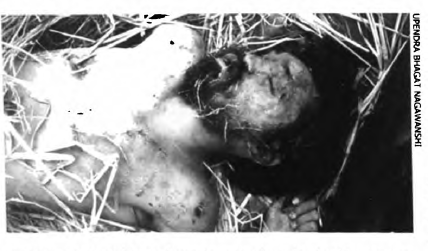 He would not have felt out of place in the populous tropical landscape of Dhanusha, amidst the pre-monsoon heat, amidst the banana plantations and sisham groves, amidst the ponds overflowing with hyacinth. But how could he have known that Nepal, so indistinguishable from neighbouring regions, was actually a country wracked by statelessness, anarchy. He would not have known that this had become a country inhabited by an edgy citizenry that could be incited into abrupt mob violence. Not the country you know. A dangerous country, suddenly, for the stranger who comes wandering by.

The reasons for this national rage are many. The years of conflict, the rise of a political party that trumpets its entry into open society as a ‘victory’ of the gun, the start of copycat militancies, the near absence of state administration, a police force lacking in any semblance of motivation. That is the country that the man from Bangladesh walked into. Even if of sound mind, he would perhaps not have understood the mania that had gripped the masses by the spring of 2009.

The day was 25 April 2009. In the Railway Line neighbourhood of Dhanusha’s village of Duhabi, he was accosted, accused of being a child thief, and killed by the villagers. At 8 pm.

Locals along this section of the East-West Highway have taken the law into their own hands, frustrated by the absence of the state and firmly believing that there is a contagion of child theft. They believe that abductors roam the countryside enticing the young ones with candies, to whisk them off to India. Thus goes the belief – that the children are cut open for their kidneys, hearts and eyes. The brains are used to make drugs, goes the rumour.

Over the spring of 2009, in this district alone, four women and three men were killed by nervous villagers, and another 20 were wounded. The majority are said to be strangers from Assam, West Bengal and Bihar. Officers with the Nepal Police say that many are, or act as if they are, deaf and dumb. Dhanusha DSP, Ram Krishna Karki, says there have been no reports of child abduction filed with the police, and that the mental instability of those who are handed over often makes it difficult to confirm the charges that are made. Obviously, the majority are innocent, like the mentally challenged beggar lady from Rajasthan killed in the village of Ratnasagar on 22 April.*

Wihout doubt, there is incidence of child theft in these plains, the result also of lax or non-existent security. It is also clear that the surrender of the state agencies to impunity is why the public is taking matters into its own hands. As it is, the eastern Tarai is wracked by criminals masquerading as political militants, protected by various political parties even while they take refuge as required across the border in the Bihar badlands.

Meanwhile, the media enflames passions even more, and nationally. In late June, the particularly gruesome murder of a young woman in Kathmandu was beamed all over – in a way that was sure to enrage still more. A series of salacious details of the possible motives and methods of the abduction and killing made the public, already on edge, tailspin into outright panic. Anyone could be targeted. What seemed to be a gang fight in a Kathmandu outskirt ended in the murder of three boys, when one side cried out Child abductor! This was enough to unleash the lynch mob.

Further, the young woman’s murder and dismemberment, and the media coverage and public reaction, ensured that the accused was denied the basic requirements of justice. Anarchy is a time of opportunism, and ‘society leaders’ have emerged to demand the reinstatement of the death penalty, which the Constitution of 1990 had done away with. A politician, one just starting out in open society and with an as-yet-undeveloped sense of responsibility for his pronouncements, announced with satisfaction that “this is what happens when the public has had enough – it is natural enough.”

The visitor from Bangladesh took a fatal turn when he crossed into Nepal, looking so much like the terrain of North Bengal, whether Jalpaiguri or Dinajpur. He would not know, he could not know, what the absence of state and security does to a people. Perhaps the accompanying photograph will identify him, and give man from Bangladesh at least the dignity of recognition in his departure.

* Information from Dhanusha made available by Upendra Bhagat Nagawanshi